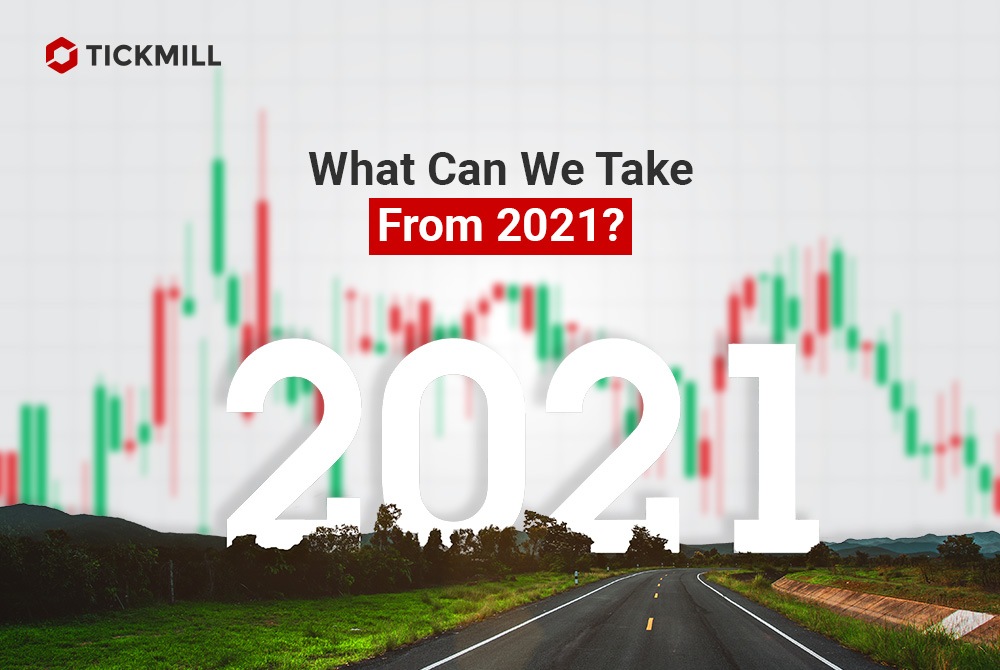 With that in mind, we thought we’d kick off 2022 with a quick recap of some of the highlight moments from 2021. So, if you’re brave enough to relive it all over again, read on!

The first quarter of 2021 was an interesting time for markets, as traders found themselves caught between fears over the new Delta variant taking hold around the world and optimism over growing vaccination uptake. With most of the world still in lockdown over Q1, the mood on the ground might have been quite bleak. However, markets were already looking ahead, focusing on the anticipated recovery over the year to come.

As vaccination uptake started to increase, particularly in the UK and US, optimism continued to grow. This optimism was further bolstered as reopening began to take shape. However, it was not entirely smooth sailing and markets were prone to downside shocks from any negative headlines such as those around vaccination supply issues, slow take up in places or news of fresh outbreaks and renewed restrictions.

One of the most enthralling episodes of market action in 2021 was of course the dramatic scenes which took place in several unassuming US stocks. As hundreds, if not thousands, of retail traders joined forces, via communications on popular Reddit thread ‘WallStreetBets’, several stocks saw dramatic gains in very little time. One of these was US stock GameStop which exploded by around 800% as a result of the combined buying.

The driver behind the move was to punish hedge funds which were holding short positions in the stock, driving the company towards bankruptcy. One hedge fund in particular, Melvin Capital, was forced to liquidate its position as a result of the move. Several brokers were also forced to cease trading as a result of the volumes going through, as media coverage drove greater traffic to the site and funnelled more action into the markets.

Similar scenes were encountered in stocks such as Nokia and Blackberry and, there was even an attempt at driving the price of silver higher. While the moves eventually subsided, leading to decline which were as drastic as the rallies, for a brief period the world of financial trading was turned on its head as the little guys took over and stuck it to the man!

The action seen in some of those stocks over the height of the WSB episode was very similar to what we were seeing elsewhere in another section of the market. Crypto traders had an astonishing start to 2021. The market ballooned in size with leading cryptocurrencies seeing extraordinary gains. Crypto icon Bitcoin rocketed higher, by over 120% in the first five months of the year.

However, it was in some of the newer and lesser-known cryptocurrencies where we saw the real fireworks. Some of these “alt-coins” were seen making gains of more than 1000% over the same period as the media attention to cryptocurrency drove a record surge in demand.

Social media played a huge part in the crypto revolution seen over the first half of 2021. Forums, chat-networks and even gaming streaming platforms helped spread the crypto craze as more and more people ploughed into the market. While the rally fizzled out into the summer, for Bitcoin at least, we saw another big rally with price eventually breaking out to fresh highs before collapsing again. Given the volatility in price action, the asset class has become one of the most exciting to watch heading into 2022 which traders keenly debating, where to next?

Following a very rough-and-tumble year of trading over 2020, during the height of the pandemic, commodities prices came back with a vengeance in 2021. Fuelled by soaring optimism over vaccination rates and re-openings taking place around the world, demand for raw materials hit fresh highs. Copper, iron ore, steel… You name it, they were buying it!

Aluminum saw its best year in over a decade while agricultural markets also saw huge gains, including corn and sugar which both were higher by more than 20%. The return of world trade in the aftermath of the worst days of the pandemic proved to be a gold mine for commodities traders (get it?)

Drilling down into the commodities rally a little bit more (no more puns I promise), oil and gas saw bumper years. Natural gas was higher by almost 200% at its peak in 2021. A combination of a surge in demand, production issues and dwindling stocks meant that natural gas was hot property in 2021 (ok I lied about the puns).

Oil prices saw a solid year of buying also. The pickup in the global economy as a result of re-openings, the return of world trade and the slow but steady pick up in global travel meant that oil was firmly back in demand over the year, soaring by around 80%.

Energy prices remained a key theme throughout 2021 and after the summer, the supply chain issues which gripped the world saw prices rising even higher. A mixture of COVID related disruptions, political stand-offs and regulatory issues meant that global supply chains broke down. Several energy suppliers went bankrupt, leading to even higher energy prices as supply issues worsened. This all culminated in comedic scenes in the UK as petrol stations began running dry leading to a great deal of drama on the forecourts, endless queuing, and breakdowns galore.

One of the standout themes of the year was the return of inflation. Following the crushing blow dealt to global price pressures over 2020, 2021 was the year that prices bounced back. Looking back over some of the prior points we’ve covered, you might already have a good idea why.

Soaring commodities and energy prices, supply chains issues, worker shortages and pent-up demand all combined to create an inflationary storm. In the US, UK and Eurozone, inflation rocketed higher over the summer and into Q3 creating a headache for consumers and central banks alike. CPI hit its highest levels in almost a decade in the UK while in the US prices were at their highest levels since the 1980s.

Earlier we were taking about the dramatic gains seen in some sections of the market. However, as we know, where there are winners there are also losers. The Turkish Lira saw a stunning descent over 2021 with the currency plummeting by almost 200% against the Dollar. Turkey has been caught in an inflationary spiral over recent years which has fuelled sharp devaluations in the currency.

While the CBRT had been slowly correcting the issue through a series of rate hikes, the bank’s methods were not support by President Erdogan. In late 2020, Erdogan ousted the head of the CBRT and replaced him with a banker of his choosing. Since then, the CBRT (against global advice) has returned to rate cuts, causing the Lira to sink further lower and inflation to spiral out of control once again.

Central Banks Back in Focus

Q3 and Q4 saw the markets dealing with an issue we haven’t had to face in a while, central bank tightening! With inflation soaring, and economic indicators confirming solid upward trajectory into Q3, market focus swung back onto the expectation that central banks, especially those in the G10 would soon be tightening. The BOC was the first to pull the trigger in October.

However, despite mounting expectations, it was not a simple story. Many central banks came close before eventually backing off (BOE we’re looking at you) and the market became increasingly frustrated trying to gauge when tightening would begin. The Fed and the BOE eventually joined the party while others, such as the RBA and ECB were forced to sit on the side-lines.

Into the final quarter of the year, it became clear that we are now firmly back into a tightening cycle with the BOE lifting rates and the Fed stepping up the pace of its tapering. The big focus now is on when we are going to see further tightening.

Omicron Vs the World

Of course, we couldn’t wrap up a 2021 recap without a brief word from our sponsor – Omicron. The early days of 2021 struck fear into the hearts of traders (and citizens alike) as news of a new COVID variant hit the wires. First discovered in South Africa, the variant which was shown to be far more infectious than previous trains, was all over the world. Consequently, markets began tanking as countries announced travel restrictions and many feared that we were headed back into global lockdown.

However, scientists soon established that the strain, while more infectious, is not as virulent as prior strains. With this in mind, most countries have so far avoided the strictest of measures and, with data supporting the view that the strain is not as powerful, the outlook remains favourable as we kick off 2022. Some scientists are even hopeful that this strain will prove to be the end of the pandemic given its milder symptoms.

So, now we’ve taken that little walk down memory lane, you’re likely wondering what’s in store for 2022… Well, wonder no more as we’re going to be having a LIVE panel with some of the brightest minds at Tickmill. Our experts will be discussing the developing pandemic, the 3rd year of the presidential cycle, global central bank policies, commodities, crypto and so much more.

Join us on January 19th, 2022, at 18:30 UK time; to hear what our experts think the future could hold! Find out more and save your seat by clicking here.

Disclaimer: The material provided is for information purposes only and should not be considered as investment advice. The views, information, or opinions expressed in the text belong solely to the author, and not to the author’s employer, organization, committee, or other group or individual or company.