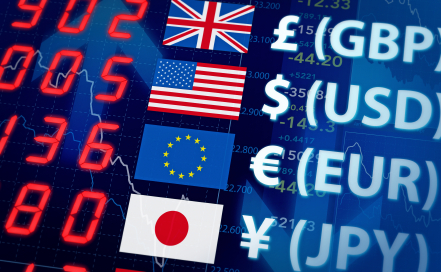 No financial marketplace comprehends as much of what is proceeding in the global trading community at any given time as foreign currency exchange, but in the end, Forex prices are a result of supply and demand forces.

The cost of one currency relative to another is constantly shifting due to the forces of supply and demand. So it is safe to say that a currency’s value is not influenced by one single force, but by several. These forces generally fall into three categories:

One of the more difficult aspects of the Forex markets to comprehend is the influence market psychology can have on the price of a currency. Since it doesn’t involve financial statements or central bank policy decisions, Forex traders have a hard time putting their fingers on it.

Sometimes it’s only the way a central bank phrased its policy statement or the tone of a speech, but Forex traders quickly turn “hawkish” or “dovish” in their sentiment and thus exert the force of market psychology on the currency markets.

Falling under the category of market psychology are the following:

Buy the rumor, sell the fact

It is the tendency for the cost of a currency to reflect the impact of a particular action before it occurs and when the anticipated event comes to pass, react in exactly the opposite direction.

Forex investors often seek the protection of a safe haven currency during times of unsettling international events. During this event, investors demand currencies perceived as stronger over their relatively weaker counterparts.

When there is clarity in the markets, investors will seek the currency offering the highest yield. This is generally known as a “risk-on” scenario. In other words, investors are willing to take on additional risk to capture a higher reward. During times of uncertainty investor sentiment may revert to a “risk-averse” mentality where they sell the higher-yielding or “risky” currencies in favor of the lower-yielding or ‘safer” currencies.

Whether because of economic or political trends, very often certain currencies move in long, pronounced trends attracting the attention of long-term cycle investors. Since there is no real business cycle or growing season affecting currency prices, certain types of investors who have the staying power look to exploit the long-term tendencies of currencies.

What are the Key Economic Influences Driving Forex Price Action?

Falling under the category of economic influences are the following:

Although all economic numbers have some impact on the Forex markets over the short run, some numbers wield more powerful influences on the movement of the markets. These numbers typically rotate, giving each a chance to share the spotlight.

An example would be traders putting more emphasis on a GDP report than a retail sales report when overall economic growth is a major issue.  At times, a weekly jobless claims report will move a currency more than a monthly jobs report.

Under certain conditions, economic data may influence a currency more than a central bank decision. At times, a central bank may issue an unchanged policy decision, but a stronger-than-expected labor market report may drive prices higher as investors price in a possible change in policy in the near future.

The easiest way to understand this is to assume that trader tastes and preferences change.

Economic policy comprises government fiscal policy (budget/spending practices) and monetary policy (the means by which a government’s central bank influences the supply and cost of money, which is reflected by the level of interest rates).

Government and central bank policies can often change as both tend to identify a problem then try to fix it by providing emergency fiscal stimulus (Government) or slashing interest rates (Central Banks).

These moves often take time to work through an economy, but Forex traders don’t necessarily wait for this to occur. They react to the initial move by the government or the central bank then make adjustments later.

The price action in the EUR/USD in June 2021 highlighted how central bank policy can influence a Forex pair’s direction. The single-currency plunged that month when the Federal Reserve changed its tone to hawkish by moving up the dates of its next interest rate hike. Meanwhile, the European Central Bank (ECB) held rates steady and offered no guidance as to the timing of its exit from its loose monetary policy.

While a short-term surprise in a report may cause a day or two of volatile, counter-trend price action, longer-term trends in economic data tend to drive longer-term movement in a currency.

Reports such as gross domestic product (GDP), employment levels, retail sales, capacity utilization, and others, detail the levels of a country’s economic growth and health.  Investors tend to demand the currencies with the best economies.

Balance of Trade Levels and Trends

Forex investors watch balance of trade levels and trends very carefully. Surpluses and deficits are perceived as indicators of the competitiveness of a nation’s economy. Once again, these reports tend to drive the longer-term trend in a currency.

Internal, regional, and international political conditions can have a profound effect on currency prices. Political upheaval and instability can have a negative impact on a nation’s economy, while the rise of a political faction that is perceived to be fiscally responsible can have a positive effect.

One country in a region may spur positive or negative interest in a neighboring country and, in the process, affect its currency. Election results and shifts in political party power.

Why Pandemics Can Be a Source of Forex Volatility?

Forex traders have learned the hard way that a pandemic can be the source of price volatility. In 2020 when the COVID-19 pandemic hit the global economy, the playing field was leveled around the world.

With all economies tanking at the same time, all the major currencies plunged. However, traders tried to maintain the relationships between the major Forex pairs, but for a short-time, money was flowing into the U.S. Dollar for protection. We learned earlier that this was because of flight to safety, or flight to quality buying.

Most central banks and governments made the same moves – drastically lower rates and flood the financial markets with tremendous amounts of cash.

As economic conditions improve, government bond yields tend to rise. The yields in the most improving economies tend to move up faster than others. Since money seeks the highest yield, investors will buy the currency with the most attractive yield.

The most glaring confirmation of how the interest rate differentional drives a currency is in the USD/JPY Forex pair.

In mid-2021, the U.S. Federal Reserve announced it was moving closer to raising interest rates, while the Bank of Japan announced it was considering additional stimulus. In the U.S., yields rose on the news, widening the spread between U.S. Government bond yields and Japanese Government bond yields, this made the U.S. Dollar a more attractive investment.