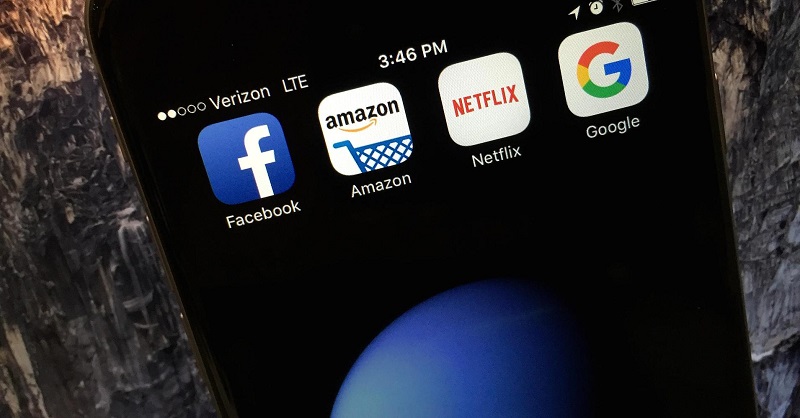 The FANG stocks are some of the biggest consumer and tech stocks listed on the US market. They are favorites amongst active traders because their high growth rates have led to massive returns and strong trends.

CNBC host Jim Cramer originally coined the term ‘FANG Stocks’ in 2013, and it referred to Facebook, Amazon, Netflix, and Google. Most traders now include Apple and use the acronym FAANG.

Some have even included Alibaba and Nvidia, extending the acronym to FAAANNG. However, for this discussion, we will stick to the five, FAANG stocks: Facebook, Apple, Amazon, Netflix, and Google.

The easiest way to profit whenever a FAANG price goes up or down is to trade Contract for Difference (CFD) on these stocks.

An overview of the FAANG Stocks

Facebook is worth $450 billion, making it the fourth largest company in the world by market cap. Since listing in 2012, the company has grown EPS from $0.16 to $6.80 in 2017. It’s done this by building a user base of over 2 billion monthly users and growing the profitability of its advertising business. Facebook’s stock price has risen more than 500 percent since 2012.

Amazon is the most successful web retailer in the world and the second most valuable company in the world. Since 2010, it has grown annual earnings from $2.28 a share to $6.35, which is the reason the company is now worth $863 billion. Traders and investors both love Amazon and believe in the vision of its founder Jeff Bezos. $1,000 invested in Amazon in 1997 would be worth over $1 million today.

Netflix is one of the fastest growing companies in history. If you had invested $1,000 in Netflix in 2002 when it listed, your investment would be worth over $400,000. However, along the way, Netflix has had some large pullbacks, allowing traders to short the stock, and then buy it back at a lower price.

Anyone who uses the internet knows how prolific Google is. It’s all over the web and makes over a hundred billion USD a year from its advertising business. Although it is no maturing as a company it still managed to grow earnings per share from $10 in 2010 to $34.2 in 2017. Google’s share price has doubled since 2015, giving the company a value of $800 billion.

FAANG stocks are favorites amongst traders because they have strong underlying growth, lots of liquidity and they are in the news a lot. There are opportunities to trade over every time period from minutes to months, and opportunities to go long and short.

CFDs (contracts for difference) are one of the best instruments to use to trade these types of stocks. They offer the opportunity to use leverage and to take short positions not only on currencies and commodities such as EUR/USD, GBP/USD, gold and crude oil but also on stocks. When you trade CFDs you do not actually own the underlying asset, but you have exposure to the price move, whether its up or down.

There are several very different trading strategies that investors can use to trade FAANG stocks. Because these stocks are in the news a lot, traders often trade around announcements and other news flow.

Stocks offer the best trading opportunities when volatility increases, and this happens when more traders are watching them. For Apple, this happens when a new product is launched and when earnings are announced. For Amazon, Prime Day and the Christmas shopping season are important. For Facebook and Netflix, any announcement about subscriber and user numbers are important.

Traders need to work out what the market is expecting and whether the company is living up to those expectations. Traders will often buy a stock as the hype increases, and then sell when the news is released – unless it’s much better than expected. If they believe the amount of hype is unrealistic, they may even go short just before the announcement, in anticipation of disappointing news.

If you trade on short-term charts, you can take long and short positions, in the direction of the medium-term trend on a 4-hour, 60-minute or 15-minute chart. Moving average cross-over strategies work well for FAANG stocks on these charts, especially when the hype rate is increasing.

The FAANG stocks are favorites amongst active traders because they are well-known companies that people understand, and because a lot of people follow them, there is lots of volatility and liquidity. The fact that they also have high growth rates means they also have big price moves. These factors all contribute to their popularity amongst traders.