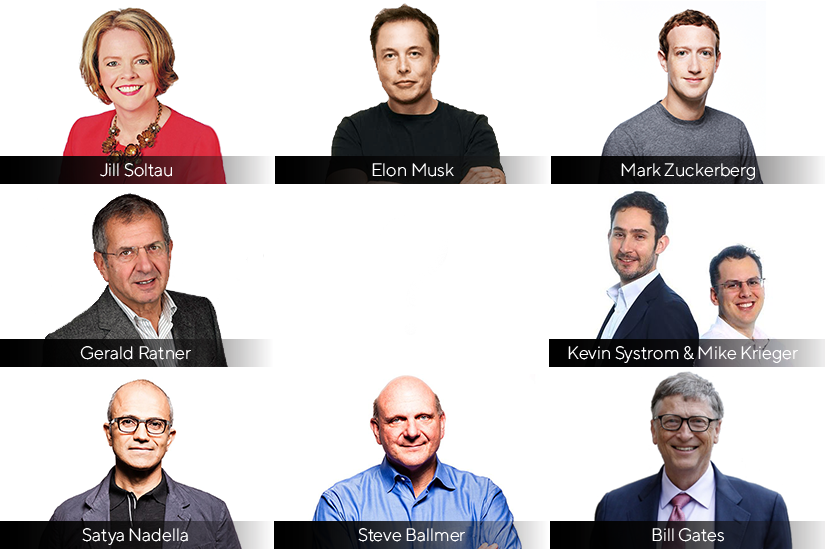 With the spawn of an idea, they managed to get rich. They influenced the markets with their actions. And can still continue to do so. Whether they stay or go, their actions will continue to echo on the companies they represent. Find out more about the world’s most successful CEOs, their presence and their weight on the financial markets. Let’s see what happened.

Recently J.C. Penney shares have jumped up more than 10% after a new CEO was nominated. Now the talks regarding the future of the company linger on whether or not, Jill Soltau, the new chief executive, will manage to hold onto a good strategy.

J.C. Penney’s new CEO has an experience of over ten years in the retail industry and received very good reviews so far. But in the first week after her nomination, J.C. Penney shares have dropped to a historically low $1.55.

The one that left us in wow

Another good example of CEOs’ power to make or break a company, is Elon Musk. Especially since the Securities and Exchange Commission (SEC) lawsuit. Who appeared to be Tesla’s role-model CEO, ended up pushing Tesla shares to drop more than $100, in the past three months.

Sure, he still remains co-founder, and product architect of Tesla while continuing to taunt the S.E.C. trough various tweets. And after all, that happened, the markets still we can’t manage to paint him as the villain. At least not after he just went ahead with a long time promise, and delivered clean water to Flint School.

One more case worth bringing up is the great split-up between Mark Zuckerberg and the duo Kevin Systrom and Mike Krieger, who co-founded Instagram. The moment the last two left Facebook (Instagram’s parent company) had an impact on Facebook shares.

Instagram’s co-founders have decided to take a sabbatical, to change-up with new ideas. Of course, the news didn’t pass unobserved and Facebook shares have shed approximately $20, and quickly recovered from it. At least Mark Zuckerberg still has Facebook’s back. The famous CEO is also the world’s 5th richest man.

The one about the second runner-up

Speaking about the richest man alive, Bill Gates beats Zuck’ by being the second richest man, according to Forbes. Nonetheless, Microsoft shares weren’t spared of downtrends. A noticeable bad moment took place during the 14 years of Steve Ballmer’s era.

That was a really bad period for Microsoft shares, that seemed to simply stay flat, ranging from the highest level of $52, and as little as $17. The shares finally went back to $38, right before Ballmer left, in February 2014.

Luckily for Microsoft, Satya Nadella, the current CEO has successfully managed to shift the performance, and bring shares to an amazing $116, in just 4 years. Imagine what he could’ve done with 10 more years.

The one that pulled a “Crapner”

You might be tempted to say that what Ballmer did is pretty bad, given the potential that Microsoft has proven during the past years, but wait till you hear the next happening.

The story took place in the early 90’s and spoke of a man that had everything and lost it all to a joke. If you ever heard the phrase “to pull a Ratner”, you should know we’re talking about Gerald Ratner, Ratner Group’s CEO.

Gerald was the son of the man that built the great jewelry empire. His famous joke summed up that a prawn sandwich might last longer than a pair of crap golden earrings, they sold. As expected, the Ratners Group shares took a great hit and Gerald lost even the right to his own name.

If you’re pragmatic, with an already developed idea about what might happen next with the shares or their futures, you might want to check Stratton. The new, regulated broker is breaking into the markets with very decent trading conditions and a solid education media center.