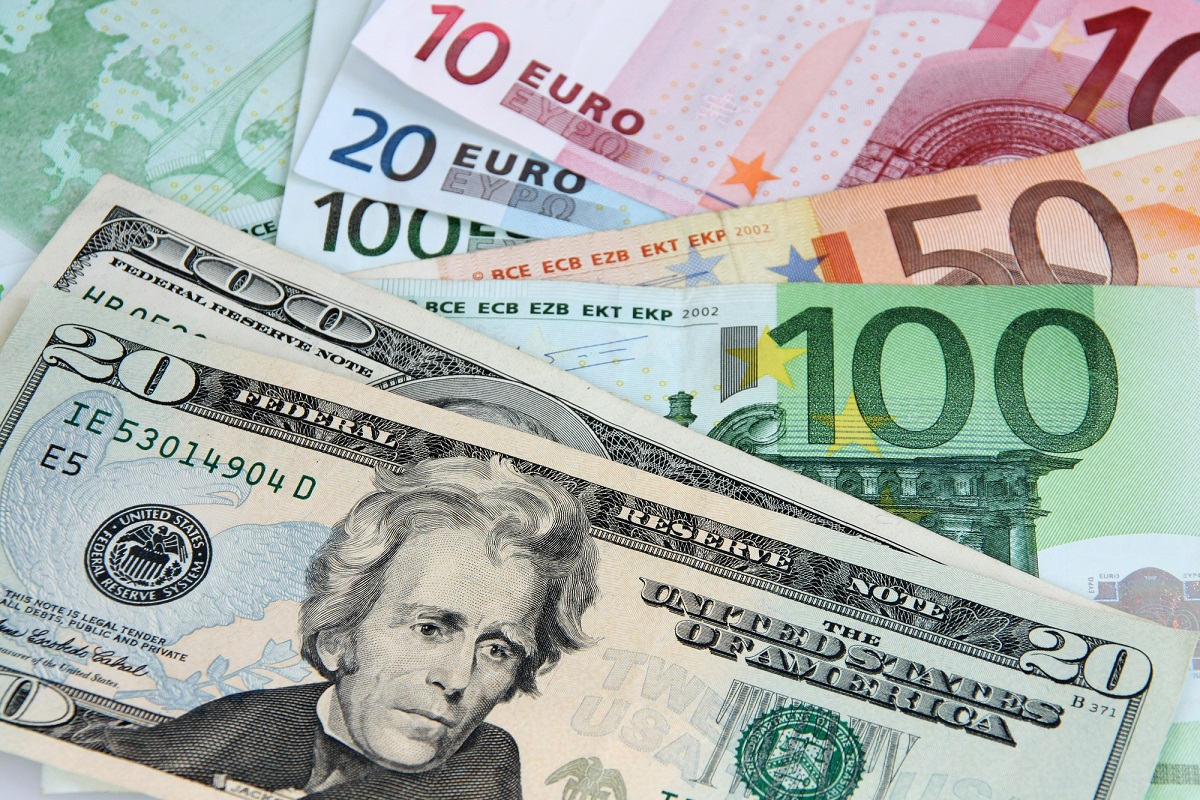 The European common currency extended losses on Monday, refreshing a two-decade low against a broadly stronger US dollar. Technically, I cannot say I am surprised by the drop; the higher timeframes emphasised clear weakness amid a lack of support and a decisive downtrend since early 2021.

I noted the following in Monday’s weekly technical briefing (italics):

Consequent to Monday’s bearish forces, weekly and daily price are on the doorsteps of notable support at $0.9925 (a 1.272% Fibonacci projection) and $0.9919, respectively. Furthermore, the relative strength index (RSI) on the daily scale shows the indicator cementing position under the 50.00 centreline, placing the value within touching distance of oversold territory, together with an indicator trendline resistance-turned-support level (drawn from the high 58.91) and indicator support coming in from 21.87.

Against the backdrop of higher timeframe structure, H4 price is shaking hands with the bearish pennant pattern’s profit objective at $0.9928 after walloping its way under Quasimodo support at $0.9998 (now a marked resistance level). However, based on the H1 timeframe, scope to approach $0.99 is on the table following the break of parity—a move widely talked about in financial news.

Support on the weekly, daily, and H4 timeframes ($0.9925, $0.9919, $0.9928) are likely to concern sellers and may be an area the charts witness a bout of profit taking. Nevertheless, the reality is that a H1 close south of $0.99 could trigger additional technical selling and place a question mark on the said higher timeframe supports.

Monday witnessed the Australian dollar finish the day off best levels versus the US dollar, amid sour risk sentiment that underpinned the safe-haven buck.

From the daily timeframe, the technical framework remains pretty much unchanged (italics):

Adding to the bearish vibe, the daily timeframe has price action dipping a toe beneath $0.6901 (and retesting the level on Monday as resistance). Splitting the aforesaid support swings the pendulum in favour of reaching trendline resistance-turned support, drawn from the high $0.7661, as well as support at $0.6678. Further weakness is also communicated by the relative strength index (RSI) elbowing under the 50.00 centreline, action informing market participants that average losses exceed average gains: negative momentum.

Shorter term, H4 price action, albeit attempting to hold the area earlier in the session, is seen chewing on the lower boundary of supply-turned demand at $0.6901-0.6862. This, as I underlined in Monday’s technical briefing, signals sellers are gearing up for a push towards prime support at $0.6774-0.6815 (arranged just north of Quasimodo support at $0.6761). However, I still believe it is worth noting that before sellers change gears, a pullback to prime resistance from $0.7004-0.6972 might be on the table.

The London session on Monday, as you can see, staged the beginnings of a rather impressive whipsaw north of $0.69 on the H1, with US traders subsequently selling into any buy-stops tripped above the psychological figure. Quasimodo resistance-turned support warrants attention at $0.6843 to the downside, and a break casts light on $0.68 (aligns closely with the daily timeframe’s trendline support noted above).

I noted the following in Monday’s technical briefing, which remains valid heading into Tuesday’s sessions (italics):

Technically, price action reflects a bearish stance, both long term and also in the short term. The close beneath daily support at $0.6901, the room to manoeuvre lower on the daily and weekly timeframes (to at least daily trendline support), and the H4 timeframe stabbing the lower limit of demand at $0.6901-0.6862 says this is a market in favour of sellers.

The whipsaw above $0.69 was clearly sufficient to spur further selling, a move that may inspire a test of at least the H1 timeframe’s Quasimodo resistance-turned support at $0.6843, and perhaps $0.68.

USD/JPY continued to flex its financial muscle on Monday, extending gains for a fifth consecutive day amid a rise in US Treasury yields and a broad USD bid.

Seeing room to manoeuvre higher on the daily timeframe to Quasimodo support-turned resistance at ¥139.55, alongside a dominant primary bull trend since 2021, informs market participants that weekly resistance drawn from ¥137.23 is unlikely to offer a similar ceiling as it did in mid-July. Therefore, overthrowing the said weekly resistance is a scenario likely in many technical traders’ playbooks, perhaps taking aim at ¥139.55.

I also noted the following in Monday’s weekly technical briefing in terms of the relative strength index (RSI) (italics):

Interestingly, the daily timeframe’s relative strength index (RSI) ventured above its 50.00 centreline after coming within an inch of testing oversold space and forming hidden positive divergence at the beginning of August. Dethroning the 50.00 base adds weight to last week’s push, informing market participants that average gains are exceeding average losses (positive momentum). Upside targets are seen at the indicator trendline resistance, etched from the high 87.44, and indicator resistance at 87.52.

Addressing the H4 chart, ascending support-turned resistance, taken from the low ¥134.27, is being tested, as I write. Clearing the aforementioned line highlights a 1.272% Fibonacci projection at ¥138.36 and a deep 88.6% Fibonacci retracement at ¥138.34. Based on the H1 timeframe, although not to-the-pip, ¥137 delivered a technical floor of support on Monday, action unearthing a potential rally to ¥138.

Buyers are in control for the time being, with little sign of slowing according to chart studies.

The room to climb higher on the daily timeframe to ¥139.55 and the H1 rebounding from ¥137, together with the clear uptrend, places a question mark on weekly resistance at ¥137.23 and the H4 ascending resistance. As a result, buyers could stage another push higher, targeting ¥138 (H1), the H4 Fibonacci ratios around ¥138.55ish (modest Fibonacci cluster), and daily resistance from ¥139.55.

Sterling fell to lows not seen since March 2020 against the US dollar on Monday, moves triggered by robust demand for the safe-haven US dollar as well as fears of an economic slowdown in the UK amid soaring energy costs and nationwide strikes.

In terms of the technical setting on the weekly and daily timeframes, I noted the following in Monday’s technical briefing (italics):

$1.1958 is likely out of the fight on the weekly timeframe as a support, hence its mark as resistance. This is not a surprise as GBP/USD has chalked up an unmistakable primary bear trend since early 2021. Breaking $1.1958 reopens the risk of a return to the pandemic low of $1.1410.

Addressing the daily timeframe, we can see that price movement has been trading beneath its 200-day simple moving average since August 2021. The currency pair, alongside the relative strength index (RSI) dropping below the 50.00 centreline, closed the week within striking distance of two 100% Fibonacci projection levels at $1.1683 and $1.1655. Note that the RSI may actually step into oversold space this week, potentially targeting indicator support as far south as 15.91.

Quasimodo support on the H4 timeframe greeted the currency pair at $1.1806 on Friday but stood little chance on Monday amid the bearish onslaught. Price is now seen crossing swords with the $1.1760 14th July low. Readers may recall I wrote the following regarding lower timeframe price structure (italics):

Short term, we are at support on both H4 and H1 timeframes. If H1 climbs above Quasimodo support-turned resistance at $1.1826, this signals a pullback is potentially on the cards to $1.19 (followed by H4 Quasimodo support-turned resistance at $1.1925) and consequently opens the door to a short-term bullish scenario. However, cracking beneath $1.18 indicates breakout selling towards $1.17.

As evident from the H1 timeframe, price failed to find any acceptance north of $1.1826 on Monday and subsequently tunnelled through $1.18, which, as communicated above, paves the way for a test of $1.17.

Longer term, as noted in recent analysis, GBP/USD is technically exposed to further weakness this week until at least the daily timeframe’s 100% Fibonacci projection levels at $1.1683 and $1.1655.

Short term, I see limited support stopping the currency pair from attempting to voyage lower and attack bids around $1.17. Thus, a retest at $1.18 today could see sellers enter the fight.