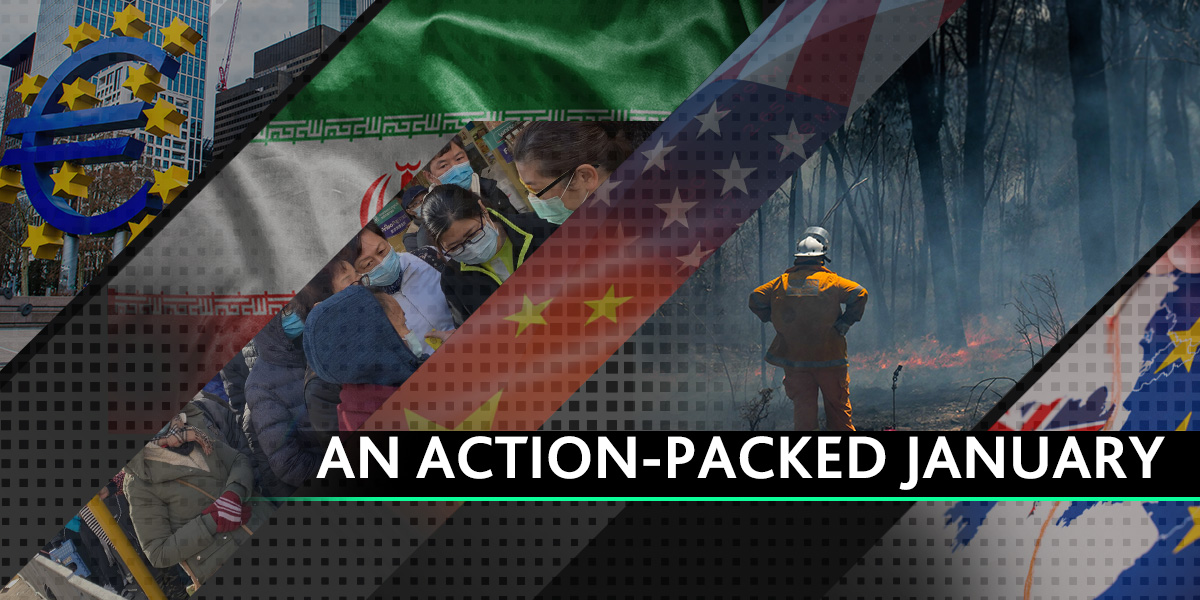 Investors barely had time for a breather as the new developments were crucial in setting the tone for the rest of the year.

There were many expectations that 2020 which marks the start of a new decade will be the confirmation of a new era for climate change. January was the reality of the “green” shift in the world of finance. Extreme weather conditions and raging bushfires across Australia triggered fierce debates about the climate crisis across the globe.

This year, the World Economic Forum in Davos also emphasized on climate change and had even run a more environmentally-friendly event to raise awareness for the need to reduce our carbon footprint.

Market participants are recognising the intense pressure on policymakers and the urgency for climate action. Investors are at a key turning point where the fundamental shift is forcing sustainable investment.

The start of the month was marred by heightened tensions in the Middle East. A series of missile strikes from both the US and Iran has kept investors on edge due to rising fears of war. President Donald Trump’s decision not to retaliate after the latest Iranian attack on a US base in Iraq calmed investors.

Market participants welcomed the positive news on the trade front. After Mexico, the US formally signed the new North American trade pact into law on Wednesday. Canada is the only country left to ratify the revised trade agreement.

Phase One of the trade deal between the world’s two powerful economies is officially signed. Despite the scepticism that the next phase of trade negotiations will be tough, investors cheered the trade truce.

Brexit is now official and this Friday will mark the day the UK will formally leave the European Union. The European Parliament has approved UK’s withdrawal agreement and both parties now have an 11-month transition period to allow new UK-EU negotiations to take place.

Central banks eased monetary policies last year and had even restarted unconventional monetary policies amid fears of a slowing global economy and trade tensions. However, comments this month by the central banks have been more or less in line with expectations. Major central banks appear to be on hold, as anticipated, and projections have not been significantly different to trigger a reassessment of global interest rate outlook.

Despite a volatile few weeks, there was enough optimism on both the economic and geopolitical front to bolster confidence in the global markets. However, the outbreak has caused more than 170 deaths and 7,000 infected persons so far and has triggered some momentary panic in the markets.

Governments around the world are ramping up efforts to contain the virus which brought some reassurance to investors. China has quarantined major cities and many airlines have cancelled flights to China to limit the spread across borders.

Tourism, travel and aviation-related stocks are the most negatively affected while a handful of biotechs companies surged this month after the Coalition for Epidemic Preparedness Innovations announced funding of $12.5 million to develop new vaccines against the Wuhan virus.

The World Health Organisatoin (WHO) has officially declared the coronavirus outbreak as a global health emergency easing fears that the WHO is increasing its efforts to contain the virus.

Overall, a series of key positive developments has helped the stock markets reach fresh new highs, but the Coronavirus has tamed the momentum. At this stage, the impact of the virus on the global economy is quite limited. While it is too early to determine the economic effect of the virus, any global epidemic generally tends to have a short or medium-term repercussions. The increased international efforts to contain the spread are so far encouraging.

Aside from the pandemic, investors are expecting a global recovery over the months. Economic data released this month has been promising. Yet, certain risks persist which could have some impact on the pace and magnitude of the global recovery:

Fundamentals are improving and there are more positive economic growth forecasts than expected. At the moment, volatility is mostly driven by headlines and the unexpected virus. The current environment is positive, but caution is still expected given the prevailing uncertainties. In February, we expect investors to keep monitoring those risks, and analyse economic data and earnings results to reassess growth expectations.