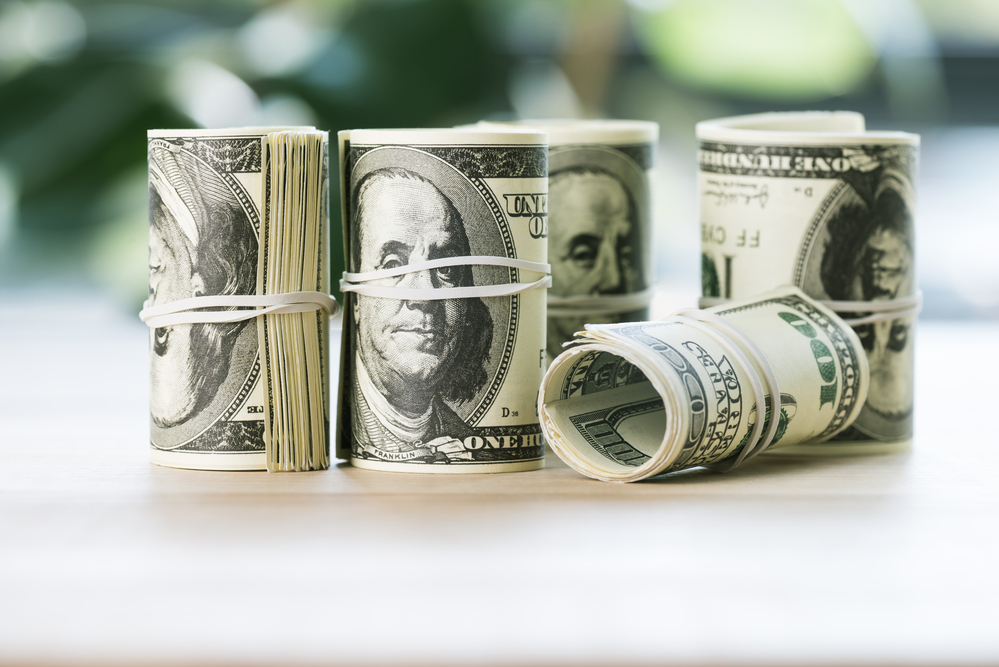 Following a three-month retracement slide, demand at 1.1857-1.1352 made an entrance and has sparked a bullish revival in April, up 3.1 percent MTD.

Erasing March losses, recent upside throws light on the possibility of fresh 2021 peaks, followed by a test of ascending resistance (prior support – 1.1641).

Buyers and sellers were pretty much even Monday, chalking up a doji indecision candle just north of support at 1.2058. Quasimodo resistance calls for attention at 1.2169, followed by another Quasimodo formation at 1.2278.

According to the RSI oscillator, momentum remains to the upside, bound for overbought status (resistance seen at 80.39).

Trend studies reveal EUR/USD has been trending higher since early 2020 (many analysts will refer to this as a primary trend).

Early US hours witnessed the currency pair shake hands with demand at 1.2049-1.2061 and, aided by a 38.2% Fib level from 1.2069, sponsored modest buying. Technicians will note the 100-period simple moving average was circling territory just beneath the said demand around 1.2048.

Overthrowing 1.21—immediate resistance—shines the technical spotlight on resistance coming in from 1.2138.

In conjunction with latest developments, RSI movement discovered a floor above support at 35.45 and navigated north of the 50.00 centreline. A centreline cross indicates a strengthening of the trend.

Technical elements from the monthly, daily, and H4 timeframes suggest buyers are in command, and a 1.21 breach is in the offing on the H1 scale.

Improved market sentiment underpinned the risk-sensitive Australian dollar against the greenback on Monday. Up 0.7 percent, AUD/USD wrapped up European trading on the doorstep of resistance at 0.7817.

Should bullish forces overthrow 0.7817, the technical runway appears clear for additional outperformance, targeting supply at 0.8045-0.7985. A 0.7817 rejection, nevertheless, swings the pendulum back in the direction of February’s low at 0.7563.

Recently scaling above the 50.00 centreline, the RSI oscillator reveals channel resistance, extended from the high 80.12, could be pulled into the fight (plotted just south of overbought terrain).

Price action, as you can see, extended recovery gains on Monday and crossed swords with Quasimodo resistance at 0.7800. This followed a deep rebound out of 0.7696-0.7715 demand in the latter part of last week.

Supply at 0.7783-0.7760 failed to offer sellers much of a platform on Monday, leading to the area stepping aside mid-way through London trade, with subsequent bullish flow taking on the 0.78 figure in US hours. With candle action attempting to gather support north of 0.78, continuation moves to 0.7850 resistance could be on the cards today.

Against the backdrop of price movement, however, the RSI indicator recently exited overbought status ahead of resistance at 80.85—a bearish signal.

The daily timeframe, as aired in Monday’s technical briefing, highlights resistance at 0.7817 as a key base. This places a question mark on a breakout theme above 0.78 on the H1. Technically, this could form what is known as a bull trap and guide H1 candles back into the parapets of demand at 0.7783-0.7760 (prior supply).

April, currently down 2.3 percent, is seen attempting to climb back through the breached descending resistance.

Demand at 107.58-106.85 (prior supply)—an area sharing chart space with trendline support, etched from the low 102.59, and a 38.2% Fib level at 107.73—commanded a modest bid tone on Monday and snapped a sizeable losing streak. Interestingly, technical structure reveals room for extended recovery gains to supply posted at 109.97-109.18.

RSI flow has been balancing ahead of oversold levels, and recently turned higher to touch gloves with 40.00.

Follow-through buying on Monday elbows resistance at 108.50 into the spotlight, with a break unmasking another layer of resistance from 108.99.

While upside attempts were limited by 108 on Friday (accompanied by trendline resistance, etched from the high 110.55, and the 100-period simple moving average), London observed buyers enter the frame on Monday from demand at 107.52-107.65 and engulf the aforesaid resistances.

Assessing the RSI on Monday, we can see the value has begun levelling off a touch under overbought space and recently dipped a toe below the 60.00 barrier.

The 108 figure echoes possible support on the H1 timeframe, knowing daily price rebounded from an area of relatively notable confluence and H4 demonstrates scope to climb for at least 108.50.

Cable eked out modest gains on Monday, witnessing a corrective phase from session tops at 1.3929.

Technical structure to be mindful of on the daily scale can be seen at resistance around 1.4003, closely shadowed by trendline support-turned resistance, taken from the low 1.1409. Lower on the curve, 1.3670 bottoms are visible, arranged north of Quasimodo support at 1.3609 and associated Fibonacci confluence (commonly referred to as a Fib cluster).

As for trend, GBP/USD has been trending higher since early 2020.

Momentum studies, according to the RSI indicator, defended space north of the 50.00 centreline in recent movement. Continued interest to the upside points to overbought levels, in particular resistance at 76.14.

1.3946-1.3925 supply made a show on Monday, an area dovetailing with a Fib cluster between 1.3923 and 1.3914. Offers from these areas likely derived fuel from buy-stops stationed above the 1.39 figure (not only do sellers place protective stops above round numbers, breakout buyers also place buy-stop orders).

From the RSI, we can see trendline support, taken from the low 24.15, was engulfed and shortly after retested to deliver modest resistance. The 50.00 centreline is also in the spotlight.

Short-term technicals show sellers attempting to hold south of 1.39, helped by H4 resistance at 1.3919. For that reason, price could adopt a bearish setting today and make a run for the 1.38ish range.

It is at 1.38, chart studies also suggest buyers could make a show, given the technical confluence joining the round number.