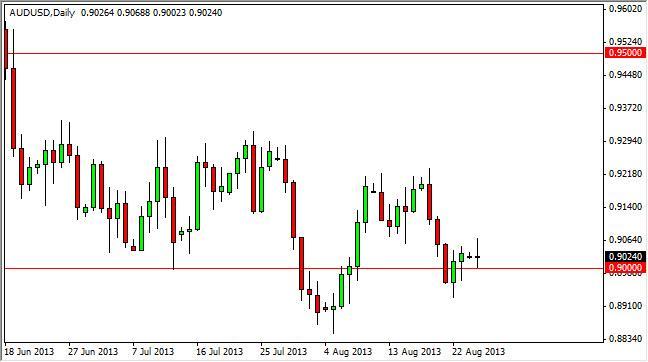 AUD/USD had a rough day on Thursday as it both shot straight up, and then fell apart. The original move was in reaction to the EU announcement of a rate cut, something the market desperately wanted. The initial reaction was short-lived though as the statement was trumped by the news conference that Chairman Draghi gave afterwards. The lack of ECB commitment to buy bonds in Europe spooked the markets, and it was all downhill from there.

There were several rumors coming out over the course of the day, and the markets reacted in kind to them. The AUD/USD actually broke the bottom support level we have been watching as represented by the hammer from Tuesday and Thursday of last week. That level was pierced and represents a real attempt at breaking the support overall. If this level can be broken back below, the market will look very bleak for the Aussie as it is a risk-related currency.

The gap from two weekends ago is calling it appears, and if we are to close it – a failure to come to a widely accepted agreement out of the EU summit on Friday could be the catalyst to see us try and fill it. If so, this pair can head back to 0.97 over the course of the next several days. In fact, it could be in a very short time as it is quite possible we could see panic at that point.

The upside might be somewhat limited as the 1.05 is massive resistance. The Aussie will react to market sentiment overall, and we think that the odds are certainly stacked against the bullish case. However, the meeting can produce headline events – and we think the real move will come after that announcement. In the mean time, it is possible that we will see choppy movement. The breaking of the daily range on Thursday has us selling this pair aggressively as the gap will more than likely be filled in short order, and the Dollar will continue to be favored in this scenario. If we rally, there will still be stagnation in the EU, and the world economy could very well slow down. At the 1.05 level – we would look for shorts as well.