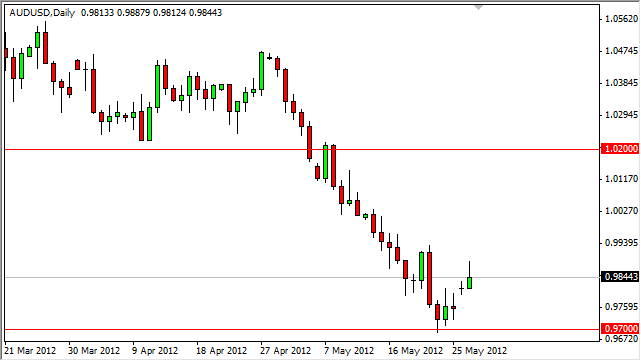 The AUD/USD pair formed a gap at the open this week as rumors of a European bank bailout fund started to make their way around the trading desks globally. However, 24 hours later there have been no announcements, and it looks as if the rumor traders are starting to lose their nerve. Because of this, we have a shooting star for the Monday session, and it looks like we are going to see this pair sell off again.

None the less, there is a large amount of risk out there at the moment, and as the Aussie is considered to be a great barometer for global risk this isn’t a pair that we like buying at the moment. The biggest problem for the Aussie is that there is a bit of a chain reaction out of Europe: The Europeans don’t buy as much from China, which means China doesn’t buy as many raw materials from Australia. While the Americans buy some Aussie raw materials, the Canadians can supply most of what they import in that sense. In a roundabout way, the Aussie is simply a proxy for Chinese economic growth, and with the expected slowdown in China coming, the Aussies will be exporting less raw materials.

Also weighing on the Aussie is the expected rate cut coming. The Aussies have a bit of a double-edged sword in the sense that when the global economy is doing well, people come to them for their materials, but when it isn’t doing so well – demand can fall off of a cliff.

The 0.97 level has been supportive in the recent past, and we think a breakdown of that area is a sign to sell this pair hand over fist. The parity and 1.02 levels above should continue to keep this pair lower, and as a result we think that rallies that fail should continue to offer selling opportunities as well. In fact, it isn’t until we get a daily close above the 1.02 mark, we can’t buy this pair. With all of the possible negative headlines out there, it simply doesn’t make sense to sell the Dollar at the moment.