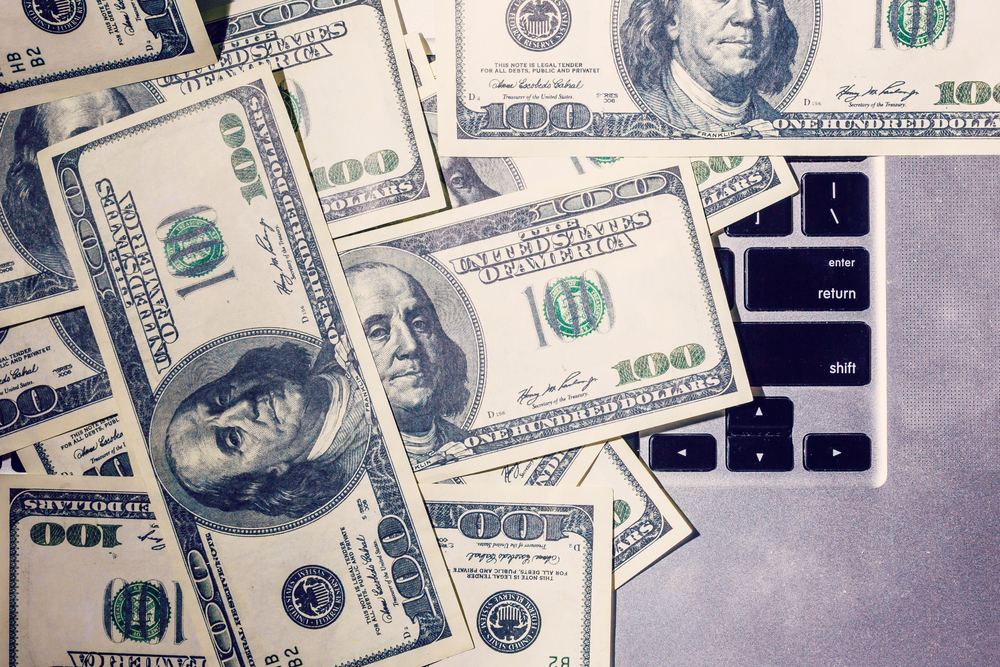 Europe’s Dow Jones Stoxx 600 ended a four-day advance ahead of the weekend but has come back bid today, led by consumer sectors and info technology. Utilities are the only sector lower in the European morning. US futures are slightly higher. The US 10-year benchmark yield is little changed near 1.61%, while European yields are mostly 1-2 bp lower. Australian and New Zealand bond yields rose (nine and 11 basis points, respectively) after the jump in Treasuries before the weekend.

The US dollar is mixed against the majors, with the New Zealand and Canadian dollars, and sterling a bit firm, and the Swedish krona, euro, Australian dollar, and yen trading heavier. Emerging markets currency are mixed, and the JP Morgan Emerging Markets Currency Index is little changed after slipping by around 0.4% at the end of last week. Gold is slightly firmer, near $1730. Last week’s low was near $1677, and the high was almost $1740. Light sweet crude for May delivery is trading around a 45-cent range on either side of $66 a barrel. Last week’s high was around $67.80.

China reported January and February data combined, and an uneven recovery remains evident. On the surface, it looks as if industrial production and retail sales were stronger than expected, rising 35.1% and 33.8% above year-ago periods, respectively. Fixed asset investment was a bit softer than anticipated at 35.0% (instead of nearly 41%), and the surveyed unemployment rate of 5.5% was higher than projected. It appears that retail sales in February were particularly soft (~0.6%), underscoring the weakness of the holiday period. Strong metal output (e.g., aluminum and steel) and coal and gas boosted industrial output.

Japan reported that January core machine orders fell 4.5%, ending a three-month increase. The series is seen as a lead indicator for capital expenditures, and the weakness is consistent with a sluggish start to the new year. Separately, Japan reported its tertiary index fell by 1.7% in January, much weaker than the 0.6% decline anticipated. Tokyo itself remains in a state of emergency until the end of the week, and the criteria for lifting restrictions have been tightened. Tomorrow, Japan reports January industrial output figures and February trade figures on Wednesday. The February CPI and BOJ meetings are the week’s highlights.

While the US was tightening the restrictions on sales to Huawei at the end of last week, a federal judge blocked efforts to prohibit Americans from investing in Xiaomi because of claims it has links to the Chinese military. The prohibition was to come into effect now, but the temporary stay was granted to the company for what it claimed was “arbitrary and capricious” that denied its due process. The threat was real and substantial as Xiaomi could have been de-listed from US exchanges and dropped from global benchmarks.

The presiding judge seemed skeptical that national security was at stake, though traditionally, the executive branch is given a wide berth here. Recall that latitude granted allowed steel and aluminum tariffs to be levied on long-time allies, including Canada, Europe, and Japan. Xiaomi is the world’s third-largest smartphone producer, and its Q3 20 sales surpassed Apple’s iPhone sales (according to International Data Corporation estimates).

The dollar rose about JPY109.35, its best level since last June in late Asian turnover before pulling back. It found fresh bids in early European turnover ahead of JPY109.00. Support is seen around JPY108.80, though last week, the greenback carved out a shelf near JPY108.35. The Australian dollar is consolidating and is little changed, around $0.7755.

A move above $0.7800, where it stalled at the end of last week, would lift the tone and signal a re-test on the $0.8000 area seen at the end of February. The PBOC fixed the dollar at CNY6.5010, slightly firmer than expected. The central bank’s injection of CNY100 bln via the medium-term lending facility matched the amount coming due tomorrow. It did the same with the CNY10 bln injection through the seven-day repo facility. The PBOC continues to with neutral policy.

Between the slow rollout of the vaccine, the extended lockdowns, the scandals, with the latest involving the CDU/CSU over a deal for facemasks, voters German voters are frustrated. Support for the CDU slipped by 2.9 percentage points compared with the last election in 2016 in Baden-Wuerttemberg to 24.1%. It managed to come in second behind the Greens (again). The Green’s support edged higher (+2.3 points to 32.6%), while the SPD, FDP, and AFD fought for third place. Still, the outcome may be good enough to keep the CDU in the state coalition lead by the Greens, but it seems more fluid.

In Rhineland-Palatinate, support for the CDU fell by 4.1 percentage points to 27.7%. The SPD’s slipped by around 0.5 percentage points to 35.7% in its stronghold and will likely continue to lead the governing coalition with the Greens and FDP. On the national-level, Bavarian Premier Soder and CSU leader appear to have a slight lead over the new CDU head, Laschet. The situation is fluid, and a decision on who will be the candidate for Chancellor in the September general election is expected to be made next month.

Sweden’s February CPI was softer than expected, and this kept the pressure on the krona. The 0.3% headline rise was half what economists projected, and the year-over-year rate was unchanged at 1.4% instead of increasing. The underlying rates, which use a fixed interest rate, and one that excludes energy, were softer than expected at 1.5% and 1.2%, respectively.

This contrasts with Norway, where the central bank meets later this week and is expected to reaffirm that it is likely to raise rates next year. Separately, Russia and Turkey’s central banks meet this week, as well. Russia may ratchet up its rhetoric and signal plans to adjust policy after higher than expected inflation readings. Many now look for a hike in Q2. Turkey’s central bank is expected to hike the one-week repo rate 100 bp to 18% when it meets on March 18.

Early last week, the euro bounced off the $1.1835-area but stalled at the end of the week, just shy of the $1.2000-level. It is trading heavily today but inside the pre-weekend range that extended to $1.1910. In early European turnover, the euro met sellers near $1.1940. This area will offer resistance in North American dealings. There is an option for 1.4 bln euros at $1.19 that expires Wednesday and another for 1.2 bln euros at $1.20 that expires the same day.

Sterling is also trading inside the range seen at the end of last week (~$1.3865-$1.4005). Today’s session high (~$1.3950) was seen in Asia and early Europe, and both times sellers lurked. The downside may be explored in early North American turnover. The Bank of England meeting is the UK highlight of the week. It is not expected to do anything, but Governor Bailey is expected to push against an early rate hike.

The busy week begins slowly with the March Empire State manufacturing survey (a slight rise is projected) and the Treasury’s International Capital (TIC) report. The data highlights are expected to include somewhat slower retail sales and industrial production in February from the surge (5.3% and 0.9%, respectively) in January. However, the focus is squarely on the midweek conclusion of the FOMC meeting. It is not so much what the Fed will do as what it will say. Treasury Secretary Yellen reiterated that the US may return to full employment with the new fiscal stimulus measures next year.

In the Fed’s December economic projections, only one official anticipated that a hike would be appropriate in 2022, and only five thought a rate would be appropriate by the end of 2023. Given the fiscal stimulus in the pipeline and the upward revisions to growth, the Fed’s view seems dated. Looking at the implied interest rate of three-month Eurodollar futures, the market appears to be pricing in the first hike in the second half of next year. The March 21 contract that expires this week implies a 19 bp yield, while the June 22 contract implies 25.5 bp, and the December contract is almost at 45 bp.

Canada’s February employment report released before the weekend was better than hoped. The pace of full-time growth accelerated (88.2k vs. 12.6k), and the lion’s share of part-time workers who could not work in January returned in February (171k vs. -225k). The participation rate was steady at 64.7%, while the unemployment rate dropped to 8.2% from 9.4%.

This week’s highlights will include firm February CPI and a soft January retail sales report. January’s underlying inflation rates (trimmed and median core) have already been revised to 2%. It is a helpful reminder that countries can experience price pressures at different stages of recovery. Although we waivered when Governor Macklem suggested that the zero bound was above zero, but below the current target of 25 bp, the Bank of Canada is likely to be among the first major central banks to taper its bond-buying this year.

The Canadian dollar is trading at new three-year highs against the US dollar as it extends last week’s 1.5% gain, the strongest among the majors. The strong employment data reinforced ideas that the Bank of Canada will provide new guidance next month. The US dollar closed below CAD1.25 last week, and there appears to be little chart support ahead of CAD1.2350, though CAD1.2400 may slow the move. The greenback is trading softer against the Mexican peso but above the MXN20.5850-MXN20.5900 lows seen at the end of last week.

Those lows correspond to roughly the (61.8%) retracement objective of the dollar’s rally since mid-February. A break could see MXN20.30 quickly. While many are debating whether Banxico can cut rates at the March 25 meeting, there is more agreement that Brazil’s central bank will hike the Selic Rate by 50 bp to 2.50% in the middle of the week.