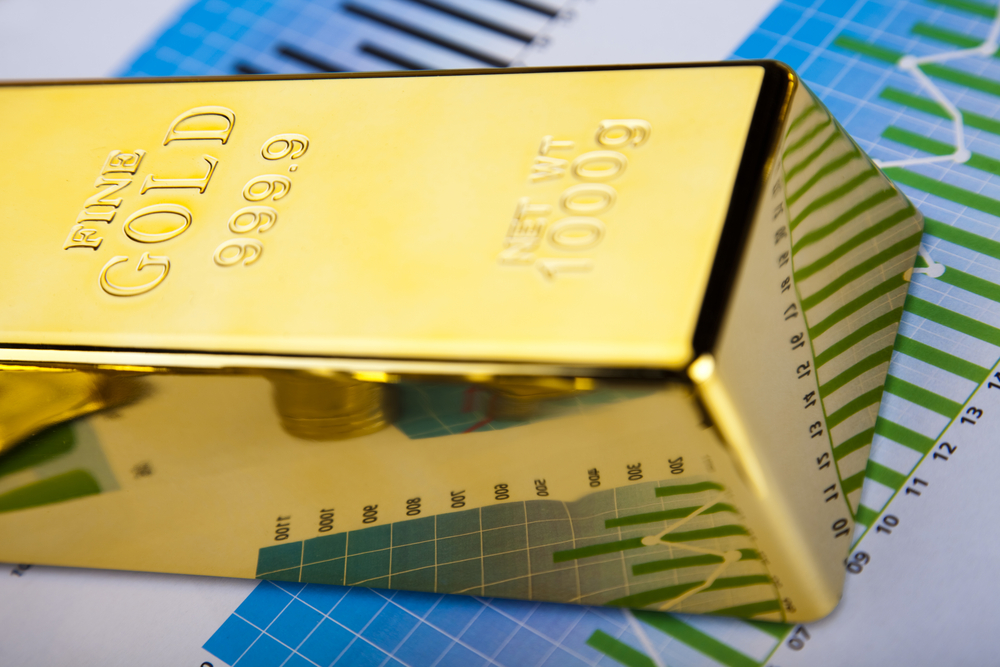 Beware of the candyman!

With Fed Chairman Jerome Powell performing his usual dovish dance on Aug. 27, gold, silver, and mining stocks were like kids in a candy store. However, with the short-term sugar highs often leaving investors with nasty stomach aches, the sweet-and-sour nature of the precious metals’ performances may lead to pre-Halloween hangovers.

To explain, while the HUI Index invalidated the breakdown below its previous lows, the bullish reversal may seem quite sanguine. However, an identical development occurred in 2013 right before the index continued its sharp decline. Moreover, I warned previously that the HUI Index could record a corrective upswing of 4% to 8% (that’s what happened after the breakdown in 2013) and that it would not change the medium-term implications. And after the index rallied by more than 6% last week, the bounce is nothing to write home about.

Furthermore, after recording a similar breakdown below the neckline of its bearish H&S pattern in 2000, a short-term corrective upswing followed before the HUI Index resumed its swift decline. As a result, gold, silver, and mining stocks may not behave like Jolly Ranchers for much longer. 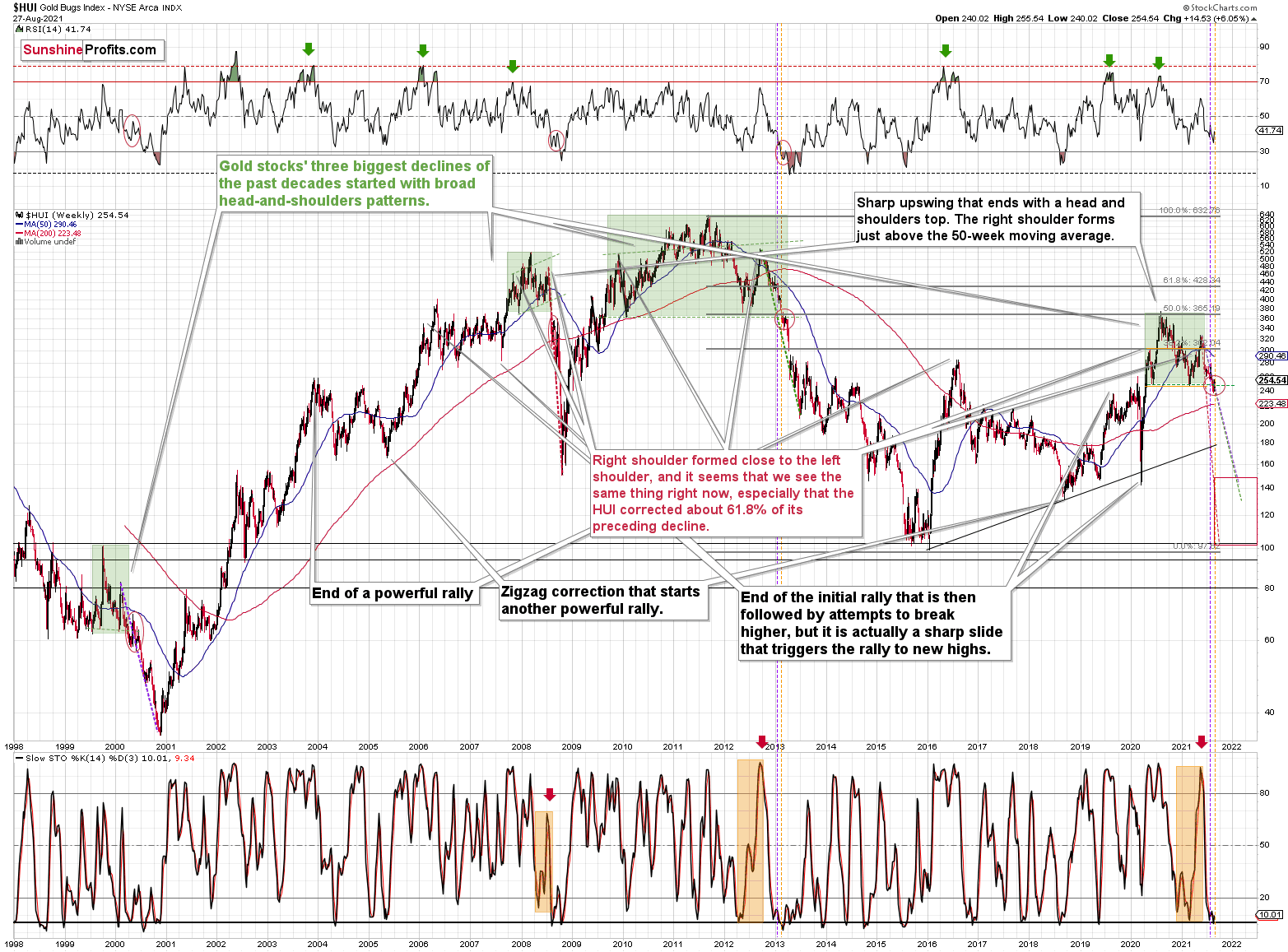 What’s more, the vertical, dashed lines above demonstrate how the HUI Index is mirroring its decline from 2012-2013. After a slight buy signal from the stochastic indicator in 2012, the short-term pause was followed by another sharp drawdown. For context, after the HUI Index recorded a short-term buy signal in late 2012 – when the index’s stochastic indicator was already below the 20 level (around 10) and the index was in the process of forming the right shoulder of a huge, medium-term head-and-shoulders pattern – the index moved slightly higher, consolidated, and then fell off a cliff. Thus, the HUI Index is quite likely to decline to its 200-week moving average (or so) before pausing and recording a corrective upswing. That’s close to the 220 level. Thereafter, the index will likely continue its bearish journey and record a final medium-term low some time in December.

Furthermore, I warned previously that the miners’ drastic underperformance of gold was an extremely bearish sign. There were several weeks when gold rallied visibly and the HUI Index actually declined modestly. Last week, we finally saw gold miners moving back up along with gold. But just like one swallow doesn’t make a summer, this move up doesn’t change the fact, that in general, performance of gold stocks has been truly terrible.

After all, gold stocks are trading close to their previous 2021 lows, while gold is almost right in the middle between its yearly high and its yearly low.

And why is this quote so important? Well, because the bearish implications of gold stocks’ extreme underperformance still remain intact.

Let’s keep in mind that the drastic underperformance of the HUI Index also preceded the bloodbath in 2008 as well as in 2012 and 2013. To explain, right before the huge slide in late September and early October 2008, gold was still moving to new intraday highs; the HUI Index was ignoring that, and then it declined despite gold’s rally. However, it was also the case that the general stock market suffered materially. If stocks didn’t decline so profoundly back then, gold stocks’ underperformance relative to gold would have likely been present but more moderate.

Nonetheless, broad head & shoulders patterns have often been precursors to monumental collapses. For example, when the HUI Index retraced a bit more than 61.8% of its downswing in 2008 and in between 50% and 61.8% of its downswing in 2012 before eventually rolling over, in both (2008 and 2012) cases, the final top – the right shoulder – formed close to the price where the left shoulder topped. And in early 2020, the left shoulder topped at 303.02. Thus, three of the biggest declines in the gold mining stocks (I’m using the HUI Index as a proxy here) all started with broad, multi-month head-and-shoulders patterns. And in all three cases, the size of the declines exceeded the size of the head of the pattern. As a reminder, the HUI Index recently completed the same formation.

Yes, the HUI Index moved back below the previous lows and the neck level of the formation, which – at face value – means that the formation was invalidated, but we saw a similar “invalidation” in 2000 and in 2013. And then, the decline followed anyway. Consequently, I don’t think that taking the recent move higher at its face value is appropriate. It seems to me that the analogies to the very similar situation from the past are more important.

For even more confirmation, let’s compare the behavior of the GDX ETF and the GDXJ ETF. Regarding the former, the senior miners (GDX) also rallied above the neckline of their bearish H&S pattern. And while Friday’s (Aug. 27) euphoria occurred on high volume, prior volume spikes in buying sentiment actually marked four peaks (or close to) within the last 12 months. Thus, while the bullish bids may push the GDX ETF slightly higher in the near term, history implies that investors’ excitement often does more harm than good. 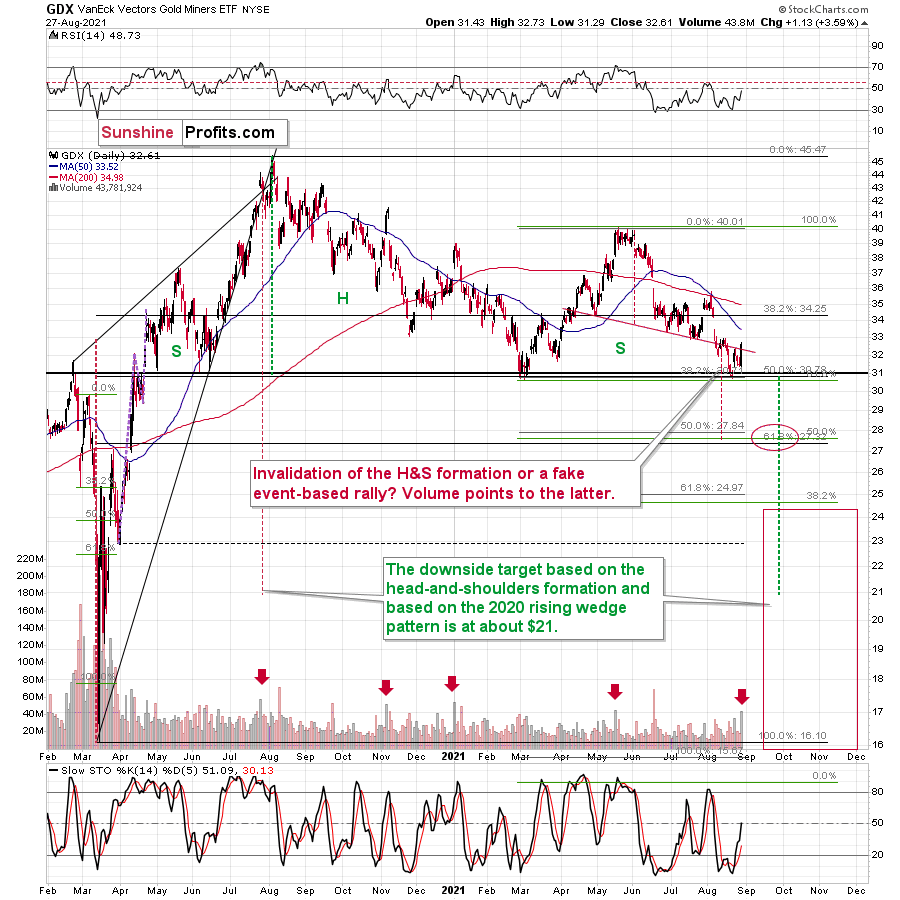 In all 4 out of previous 4 cases, the spike-high volume during GDX’s upswing meant a great shorting opportunity.

Meanwhile, the junior miners (GDXJ) didn’t invalidate the breakdown below the neckline of their bearish H&S pattern; and Friday’s close still left the GDXJ ETF below its previous lows. Moreover, while the juniors’ future direction following volume spikes isn’t quite as clear as it is with the GDX ETF, more often than not, euphoric spikes are followed by medium-term declines. 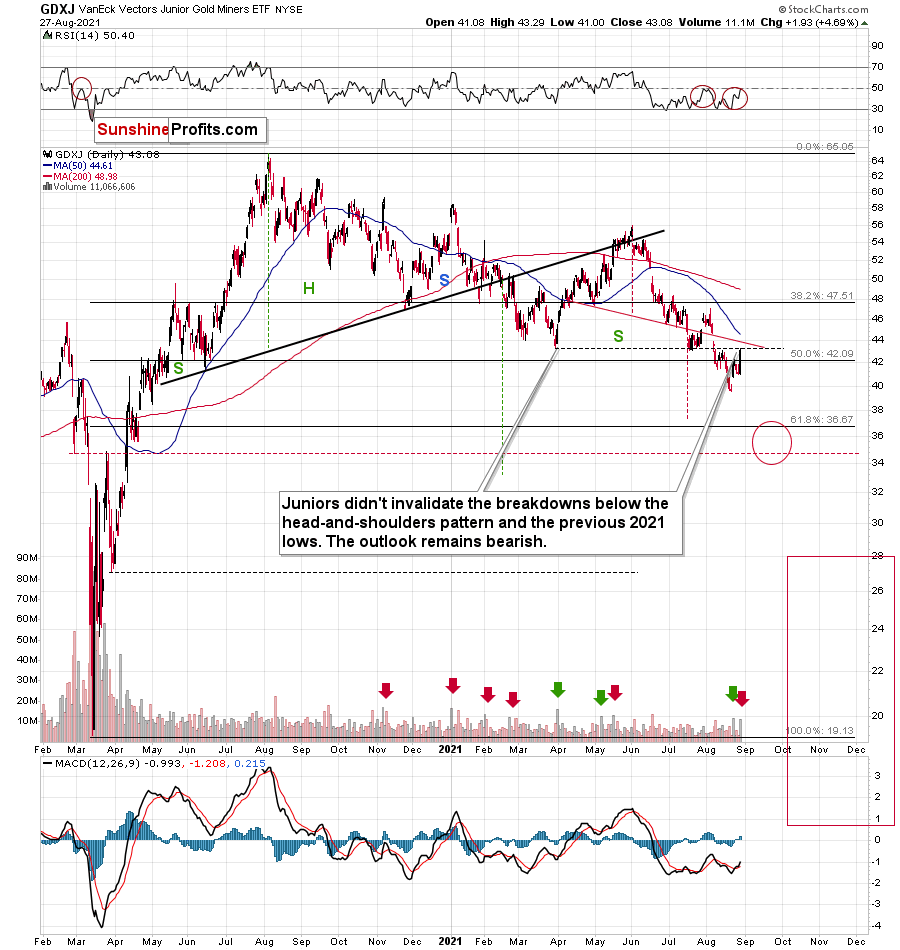 As further evidence, if you analyze the GDXJ ETF’s four-hour chart below, you can see that historical volume spikes (marked by the red vertical dashed lines) nearly always coincide with short-term peaks. As a result, Friday’s rally was more of an event driven surge – courtesy of Powell – and it’s unlikely to disrupt the GDXJ ETF’s medium-term downtrend. 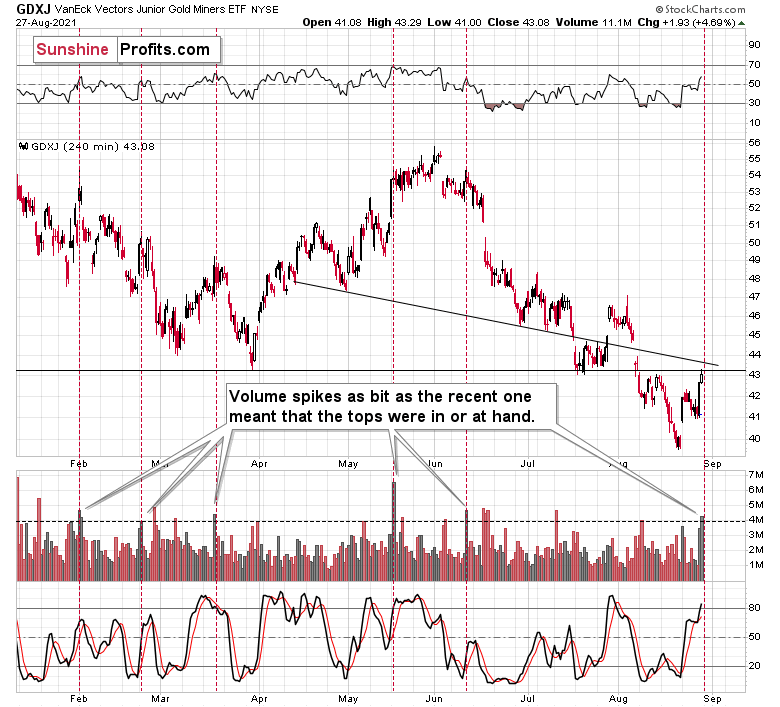 Finally, while the GDXJ/GDX ratio moved slightly higher last week, its downtrend also remains intact. For one, when the ratio’s RSI jumped above 50 three times in 2021, it coincided with short-term peaks in gold. Second, the trend in the ratio this year has been clearly down, and there’s no sign of a reversal, especially when you consider that the ratio broke below its 2019 support (which served as resistance in mid-2020). When the same thing happened in 2020, the ratio then spiked even below 1. 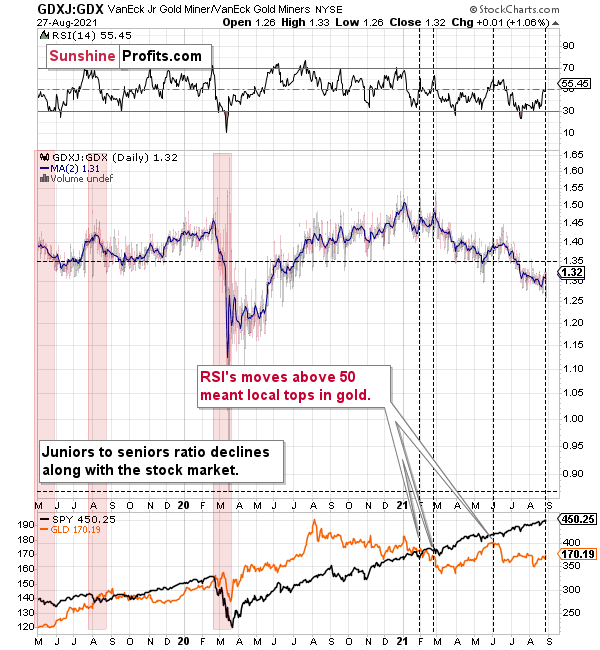 If the ratio is likely to continue its decline, then on a short-term basis we can expect it to decline to 1.27 or so. If the general stock market plunges, the ratio could move even lower, but let’s assume that stocks decline moderately (just as they did in the last couple of days) or that they do nothing or rally slightly. They’ve done all the above recently, so it’s natural to expect that this will be the case. Consequently, the trend in the GDXJ to GDX ratio would also be likely to continue, and thus expecting a move to about 1.26 – 1.27 seems rational.

Consequently, it seems that expecting the GDXJ to decline to about $35 is justified from the technical point of view as well.

In conclusion, investors showcased their sweet tooth for gold, silver, and mining stocks on Aug. 27. However, with the USD Index hovering near two key support levels and the yellow metal confronting its second triangle-vertex-based reversal point, the taste may turn bitter over the medium term. Moreover, with prior upswings underwritten by the Fed resulting in lower lows soon after, the precious metals’ bullish behavior is nothing new. As a result, their prior weakness will likely persist before reliable bottoms emerge later this year.