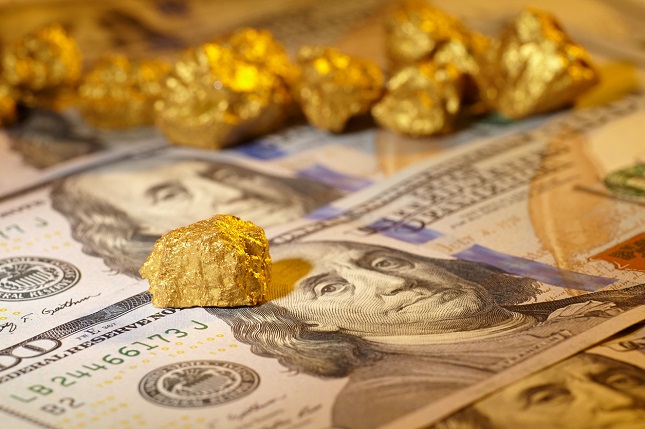 Therefore, balance requires an overview of what’s really going on in case of the medium-term trends. Instead of introducing you to quite a few relevant trees, let’s take a look at the whole forest.

The big picture shows one crucial thing. Gold has most likely formed a key 2019 top in August. The confirmation comes from the shape of the preceding upswing and the volume of the final monthly rally. Record-breaking volume shows that the investors’ emotions got to the red-hot status and yet they were overwhelmed by the sellers.

There were only two cases when the monthly volume that we saw after a sizable upswing was similarly big, and it was at the 2011 and 2018 tops. Both were followed by substantial declines (in case of the former top, the above is an understatement), and since history tends to repeat itself, gold is likely to decline in the following weeks once again.

Please note that it’s not just the similarity to the two above-mentioned cases that makes the medium-term outlook bearish. It’s the way the volume works and it literally speaks volumes. It’s not an out-of-the-blue analogy – investors’ emotions are supposed to get red-hot at the major tops and the volume confirmed that this has indeed happened.

When people wonder how do I buy gold, they often end up buying something else than gold, but with – seemingly – analogous potential. Gold stocks. After all, the latter are less bulky to purchase and the transaction is often just several clicks away. Gold needs to be stored in a safe place, and so on.

Don’t get us wrong – we think that physical gold ownership has many merits, but we want to emphasize that many people choose to ignore them and go with the easier way of being in the precious metals market, as its – well – easier.

Consequently, when discussing gold’s big picture, it’s a great idea to supplement the yellow metal’s analysis with the one of the mining stocks. In case of the long-term point of view, it’s particularly interesting to see how mining stocks perform relative to other stocks. Thanks to this approach, we can isolate the moves in gold stocks that don’t depend on the entire general stocks market.

That’s valuable, because in this way we can avoid falling into the “tide lifts all boats” analytical trap. The factors that cause all stocks (including mining stocks) to move higher or lower will be taken out of the picture once we look at mining stocks through their ratio to other stocks. Consequently, let’s take a look at the HUI to S&P 500 ratio.

As gold topped in August, the ratio topped as well, but while gold’s top formed close to the late-2011 and mid-2012 lows (in terms of the weekly and monthly closing prices), the ratio formed at a level that’s much more important from the long-term point of view. The ratio topped at its 1999 top.

That’s a major top not only because of how clear it is. It’s so important, because it was the final top before the previous multi-year bear market in the precious metals ended. The PMs then declined for about a year and the final bottom that formed, started a multi-year rally.

Just because the ratio is moving lower from the same level doesn’t mean that it absolutely has to move in the same way, but there are multiple indications that point to this outcome anyway, so the above serves as a good confirmation. Besides, that’s not the only bearish thing about the above chart.

The interesting thing about the 1999 top is that it already worked as support two times. It stopped (for a while, but still) the decline in late 2014 and it triggered a rebound in late 2015. The decline in the ratio resumed only after the ratio moved below the 1999 top. This year’s top was actually the first time when this level served as resistance. This suggests that a bigger move lower is indeed likely just around the corner.

Moreover, please note what the ratio did when the new bull market started – after the 2000 bottom it soared and then it continued to show strength for the next few years. In fact, the biggest part of the rally in the ratio took place in the first few years of the 2000 – 2011 upswing. And what did the ratio do recently?

It was barely up even though gold rallied visibly, and it failed to take out the above-mentioned resistance levels. What’s even more striking is that the recent rally in the ratio was much smaller than the ratio that we saw in 2016. The strength that we saw in the gold miners to other stocks ratio at the beginning of the previous bull market was definitely not present this year. Consequently, it’s very unlikely that we saw a start of a new powerful, long-term rally in the ratio and in the rest of the precious metals sector.

We took profits from our previous short position and entered a long position right after the November 12 reversal. In the full version of this analysis, we outline the prices at which we are going to take profits from the long position and likely enter another short position. We’re also discussing when that’s (approximately) likely to take place. We encourage you to join our subscribers and profit right along with us.