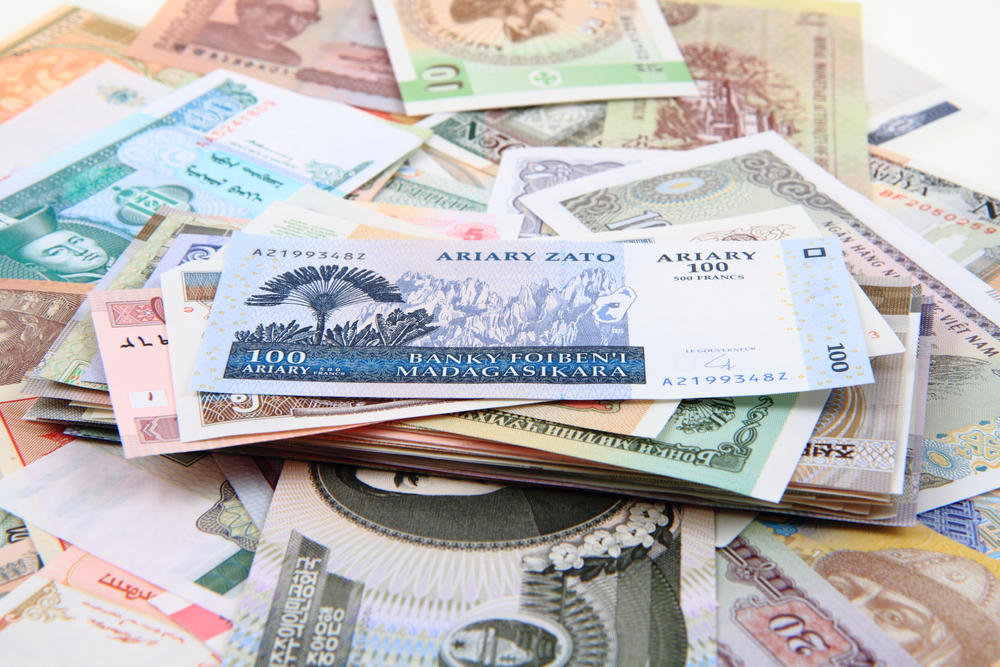 Hong Kong shares are bearing the brunt. The Hang Seng has fallen by 10% in the three sessions, including today. The Shanghai Composite is off nearly 5.5% in the same period. A few of the other larger markets in the region, including Japan, South Korea, and Australia, posted small gains. Moody’s affirmation of a stable credit outlook helped lift Philippines’ stocks by 2.4%, the most in a couple of months and recouped most of Monday’s slide.

Europe’s Dow Jones Stoxx 600 is off around 0.5%, led by financials and energy. US futures are trading with a heavier bias. Benchmark bond yields are lower. The 10-year Treasury yield is hovering near 1.25%, off more than three basis points. European yields are 1-2 bp lower. The dollar is bid. The yen continues to be resilient. Emerging market currencies are retreating as an expression of the risk-off mood. The JP Morgan Emerging Market Currency Index is off 02%.

Industrial metals have been knocked back by reports suggesting China is considering new export tariffs on steel. Oil is sidelined, and the September WTI contract is little changed, around $72 a barrel. Gold is not drawing much of a bid. A stronger dollar may offset the lower yields as a consideration. If the yellow metal does not recover, it may close below $1800 for the first time in three weeks.

Beijing is fighting a two-front battle. Domestically, the new drive that began last year with the Ant IPO and crackdown on Alibaba has broadened. Stronger regulatory efforts, anti-trust, and IPOs in foreign markets, and now private education companies are killing the proverbial goose that lays the golden egg by underscoring international investors’ concerns about investing in China.

The capital inflows were to create conditions under which Beijing could ease capital outflow restrictions. The other front of the battle is in foreign policy. Yesterday’s high-level meetings with the US appeared to have failed to break new ground. While reports suggest that there is still scope for Biden and Xi to meet in October, with the March and July contentious meetings, the chances of an agreement seem remote.

Reports today suggest China is considering a 10-25% tariff on steel exports starting in Q3 to rein in the sector. This is separate from its regulatory initiatives. This seems more in the containing commodity prices and rationalizing the steel sector. It appeared to have an immediate effect of sending iron ore and steel rebar prices lower. However, nickel, which is needed in the new batteries, proved resilient and is at new multi-year highs. Separately, China reported industrial profits moderated to 20% year-over-year from more than 36% in May.

South Korea reported slightly softer than expected growth in Q2. GDP rose by 0.7% on the quarter after a 1.7% pace in Q1. This is broadly consistent with what had been perceived as a maturing of the Asia economic recovery. The government was quick to reaffirm its expectation for 4% growth this year, indicating that today’s report will have no impact on monetary policy. The central bank meets in late August. The market has fully discounted a 25 hike in the next three months. Separately, South Korea and North Korea agreed to re-establish formal relations, including the hotline.

A record number of covid cases in Tokyo has not offset the flow into the yen today. For the first time in four sessions, the dollar slipped below JPY110.00. Initial support is seen in the JPY109.80 area, but recall last week’s low was slightly above JPY109.00. It appears that the same considerations that weigh on US Treasury yields boost the demand for the yen. Covid cases in Sydney are still rising, and the risk-off is pushing the Australian dollar lower.

The greenback spiked to CNY6.5125 earlier, which is the highest level since April. The 200-day moving average is found by CNY6.5170. The greenback has not traded above this moving average since last July. The PBOC set the dollar’s reference rate at CNY6.4734, a bit softer than the median projection in Bloomberg’s survey for CNY6.4741.

Interest in the eurozone’s money supply figures has waned, perhaps as a result of the ECB’s asset purchases and negative interest loans. June M3 rose 8.3% year-over-year, largely in line with estimates. However, it is the underlying lending figures that draw more interest. Loans to households rose 4% after a 3.9% pace in May, while loans to companies rose 1.9%, matching the previous month’s rise. The economic highlights of the week still lie ahead. At the end of the week, the preliminary July CPI and Q2 GDP will be reported.

Hungary hiked its key rate by 30 bp in June to 0.90%. It is expected to follow up with another 20 bp hike today. The overnight deposit rate has stood at minus 5 bp since March 2019, when it was lifted from -15 bp, where it had been since August 2017. Inflation runs above 5%, the highest in nine years, and the core measure is at 16-year highs. As a result, Hungary may lift the deposit rate out of negative territory today to 10 bp.

The US 10-year TIP yield is at a record low today, near minus 1.14%, which seems incredible given that the US is expected to report Q2 GDP around 8.5% at an annualized clip and a deflator of almost 5.5%. The decline in the real yield yesterday was cited as a key force behind the greenback’s heavier today. Meanwhile, states that have had low vaccination rates are seeing strong spikes in the virus. The latest figures show about 60% of the 18+ cohort have been fully vaccinated, and 69% have been given one of two shots.

That means a little more than 49% of the population is fully vaccinated, which has been fairly stable. Ironically, even as the US secures more vaccines, a sizeable minority does not want it. Meanwhile, efforts to reach a bipartisan deal on infrastructure are still being stymied.

The US reports June durable goods orders today. The headline (~2.1%) will be lifted by aircraft, without which a modest gain (~0.8%) is expected. Shipments of non-defense and non-aircraft goods may have slowed to 0.8% from 1.1%. However, more attention may be on house price reports today. The FHFA reports its monthly house price index. It has been rising by more than 1% a month since last June without exception.

In April, it rose the fastest over this period, posted a 1.8% month-over-month increase. S&P CoreLogic Case Shiller index of house prices in the largest 20-cities and nationwide are expected to have accelerated in May. This comes as the FOMC’s two-day meeting begins, and several officials share our concerns about the optics, if not the impact of the central bank continuing to buy mortgage-backed securities. The Conference Board’s July consumer confidence measure is expected to soften from elevated levels. Lastly, note that Alphabet, Apple, Microsoft, among others, report earnings today.

Canada reports June CPI figures tomorrow, and the year-over-year rate may decline (3.2% from 3.6%) for the first time this year. Mexico reports June’s trade balance. A $2 bln surplus is expected, which would be the largest for Q2. Last year, the monthly trade surplus averaged $2.8 bln a month, up from $446 mln in 2019 and a $1.1 bln deficit in 2018. In the first five months of 2021, the average monthly surplus has fallen to $66.5 mln. Separately, we note that the dispute over measuring domestic content for autos and auto parts under the USMCA has not been resolved.