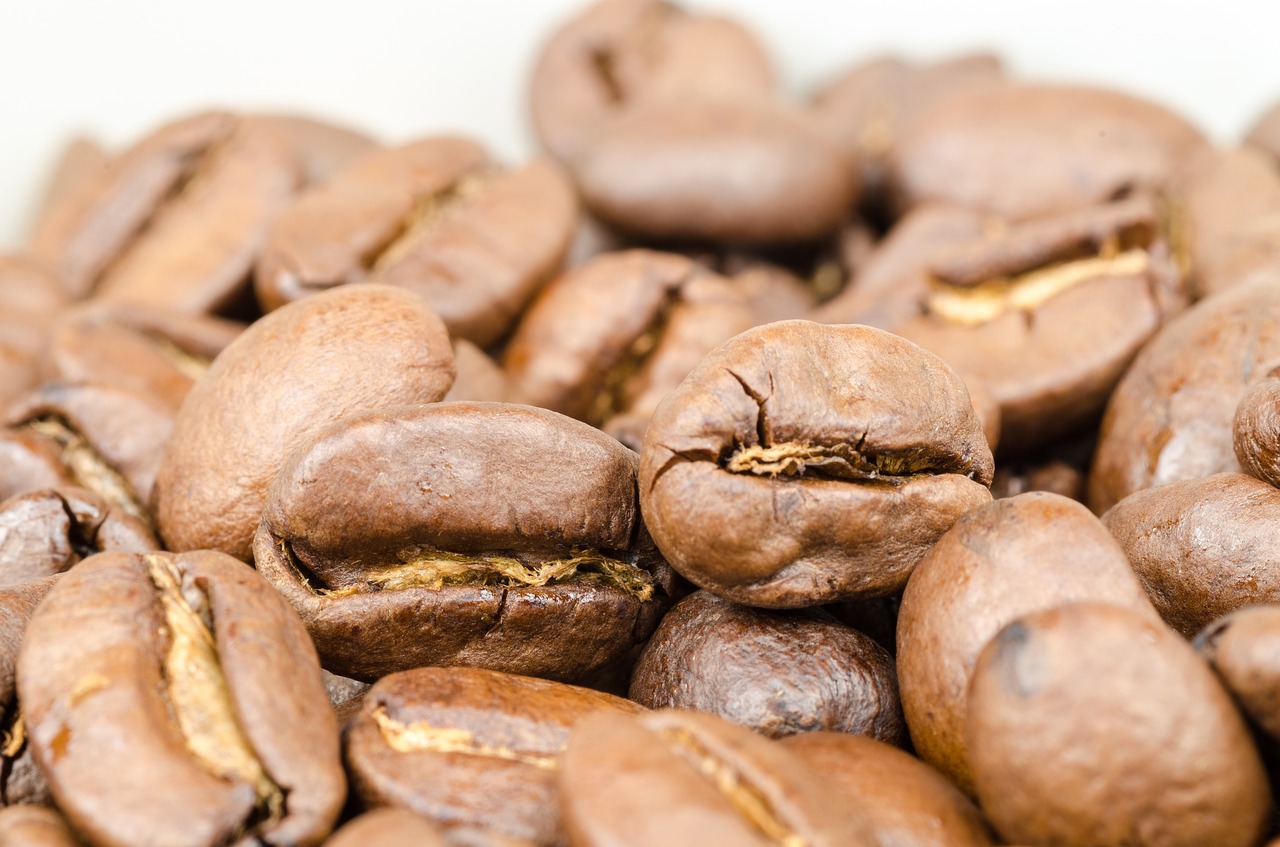 The pandemic’s impact on the availability of soft commodities like coffee and sugar has been real, with both soft commodities trading at multi-year highs. However, growing seasons marred by adverse conditions are worsening global supply, leading to further surges in prices.

On the week of July 19, coffee futures soared by 20% as unseasonally cold weather in Brazil threatened the coffee crops of the world’s largest producer. By market open on Monday, July 26th, they had risen by a further 10%. This has taken coffee prices up to their highest levels since October 2014.

It started with a shortage of shipping containers earlier in the year, which gave commodities across the board a boost due to difficulties in ramping up global transportation following the lockdowns. Then, seriously dry conditions in May followed by frosty conditions in the crop’s flowering period in July, have severely stressed the country’s coffee crop. The extent of the damage has yet to be fully determined. The country’s food supply agency has estimated that around 11% of Brazil’s coffee crops have been affected by frost.

On and Off Years

Coffee plants follow a biennial crop cycle, characterised by “on” and “off” years. 2022 was due to be an “on-year” for coffee producers, an opportunity to build waning stockpiles with a bumper crop. The combination of drought and crop stress makes it highly unlikely that Brazilian producers will now have the opportunity of an on-year to rebuild stocks. This almost guarantees higher coffee prices for consumers and is also likely to affect smaller coffee businesses that don’t have the same purchasing power as the large coffee chains.

Looking at coffee futures plotted on a monthly chart reveals the true extent of the move. Coffee futures have broken through a price level at $1.75 per pound that offered resistance back in both 2008 and 2016. 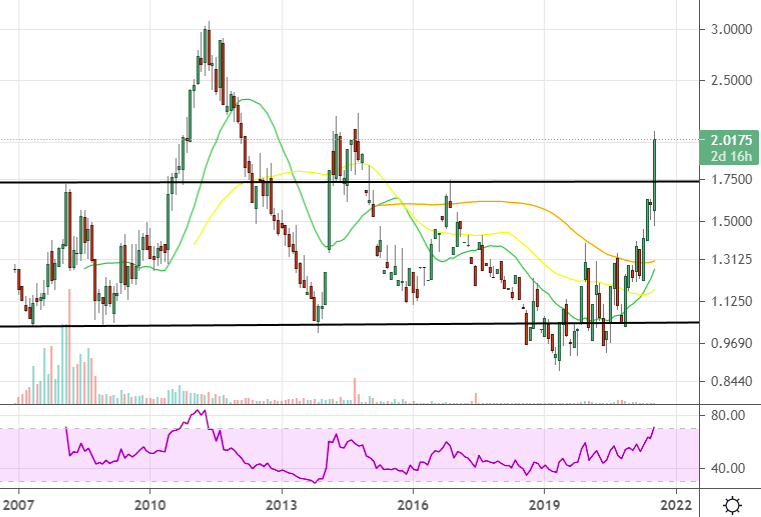 In the past decade, coffee prices have only peaked higher on two occasions. An extremely wet December at the close of 2013 was followed by Brazil’s worst drought in decades, which damaged coffee plants and led to a 5.4% downturn in production. The even more significant peak in 2011 has been attributed to a combination of factors. Poor harvests, investors trying to get ahead of price inflation following central bank responses to the 2008 financial crisis (recall that gold’s former all-time high was also in 2011), and surging global appetites for gourmet coffee have all been used to explain the surge.

At HYCM, we recently focused on coffee and sugar prices as evidence of the inflationary pressures mounting following the global response to COVID-19. Even before this recent move, the charts were suggesting a bull market that had no intentions of ending any time soon. This most recent rally has effectively set the first monthly higher-high we’ve seen in the agricultural commodity in 5 years.

If you look back even further into the historical price action of coffee, you’ll notice that it’s an extremely volatile commodity that’s highly sensitive to growing conditions and consumer demand. The chart below tracks monthly coffee prices going all the way back to the 1970s. As you can see, while coffee has experienced supply/demand shocks in the mid-80s and mid-to-late-90s, the 2011 monthly close is only bested by the all-time high the commodity reached in 1977. 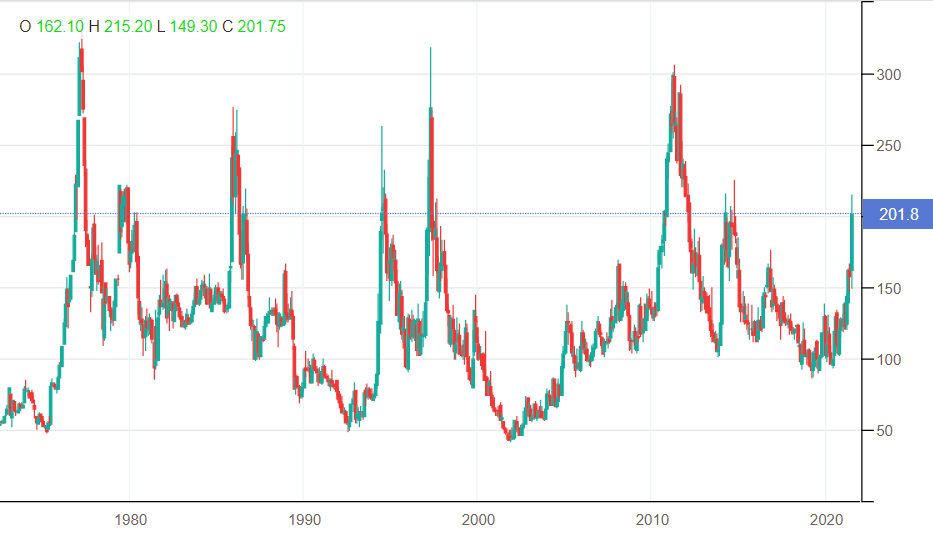 Back then, a severe frost in July 1975 destroyed two-thirds of the Brazilian crop. With replanted crops taking up to three years to return to full yield, you can understand why the global coffee market was so severely affected. A civil war in Angola, the fourth largest coffee producer at the time, also had the effect of removing a significant amount of the commodity from global markets.

However, when you look at the macro conditions back then, low growth and rising inflation (or stagflation as the combination was termed), you can see why a supply shock in a commodity known for being highly sensitive to weather conditions can get so out of hand.

The reason to look as far back as the 1970s is that many analysts and market commentators weighing in on the current inflation vs deflation debate see a return to 1970s style stagflation as a possibility. The expectation is that as growth slows when the effect of stimulus on economic activity wanes, we’ll be left with the result of all the monetary expansion, which is higher prices as more money competes for scarce assets.

Obviously, we could see a rapid mean reversion in coffee prices as we saw earlier this year with lumber. Also, keep in mind that as appetites for the commodity have grown globally, so has the efficiency of production and distribution. But when you compare the current coffee price peak with the ones that came before, it seems as though we’re comparing prior crises that are now in the history books (stagflation and the GFC) with one that has yet to fully play out. As to how far this rally still has to go, it depends on whether current inflationary pressures are enough to make this recent hit to the global supply the perfect storm.