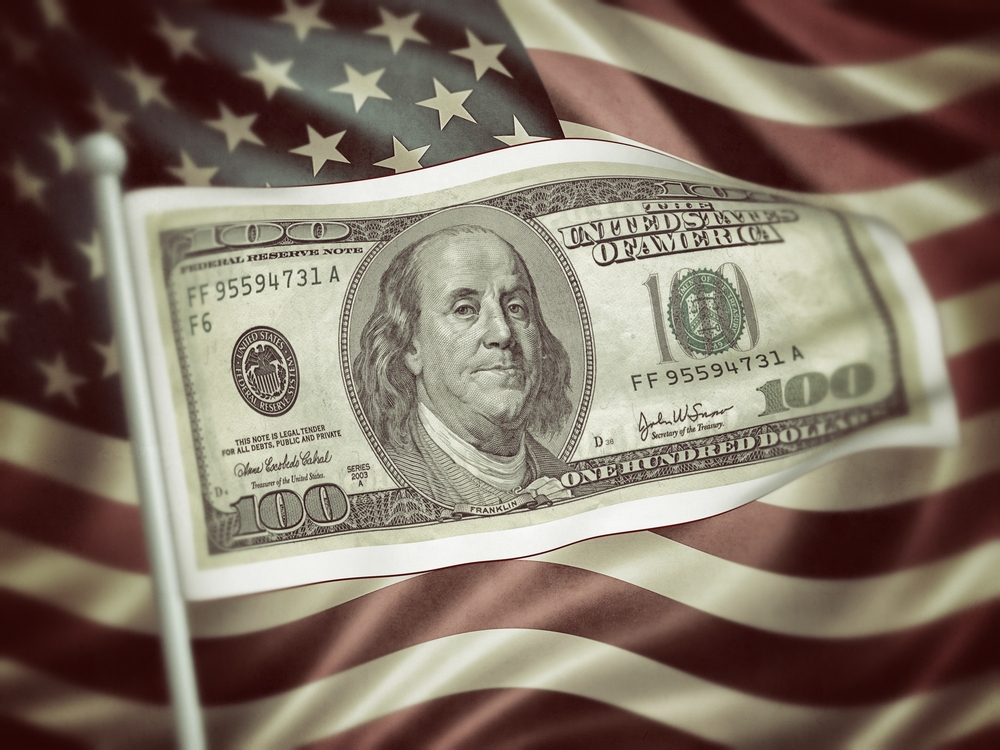 In less than a month, perhaps one of the most hotly contested and acrimonious presidential elections in recent memory is due to be held during a global pandemic and against a backdrop of civil unrest. On November 3, President Donald Trump will seek to maintain his grip on the reins of power for another four years as Democratic nominee Joe Biden hopes to unseat him.

What will this mean for the markets? It’s still anyone’s guess, but looking back to 2016’s election can perhaps provide us with an insight as to what may be in store. Some of you may remember that the recent bout of dollar strength we saw earlier this year at the height of the coronavirus crisis has only been eclipsed once this past decade. In mid-March, the DXY breached the 100 level to top out at around 103 by the end of the month. The last time the dollar rallied as hard was in the wake of the 2016 election following President Trump’s victory, where it topped out just shy of 104. To get anywhere near to those levels prior to that, you have to go all the way back to the end of 2002. 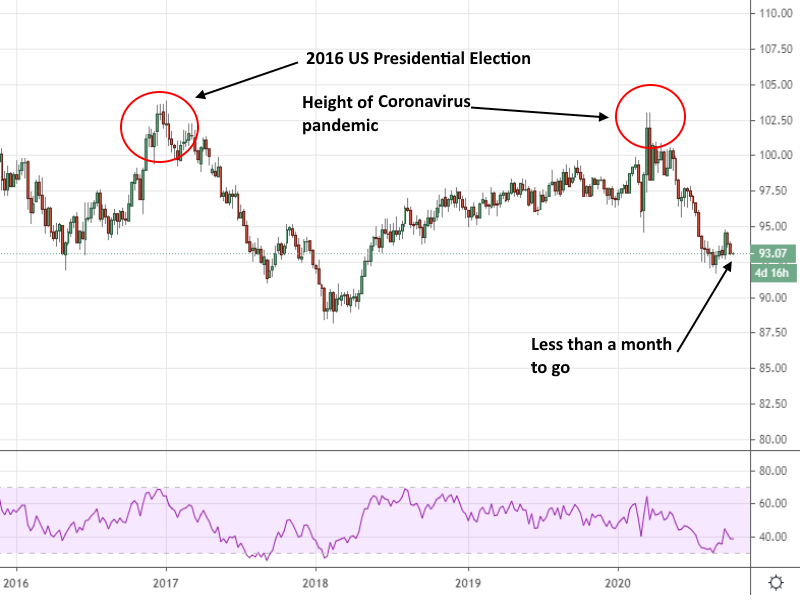 Weekly Chart of DXY going back to 2016. Source: Trading View.

Those of you following US equities back in 2016, will also recall what, at the time, seemed like a worrying sell-off, which hindsight has revealed to be a mere blip as markets shook off the shock of a Trump victory and promptly rallied to new highs. So, we had the risk-off combination of a dollar rally and equity sell-off until markets came to terms with the fact that the sky was not indeed falling, and that the new commander-in-chief may just be good for business. But will this time be as cut and dried?

As you can appreciate, what we have now is a much more volatile situation. What we’ve seen in the US since March is a V-shaped recovery in equities combined with a downturn in dollar strength. The US dollar index hit lows of 91.70 at the beginning of September and has been coiled up in a range between 91 and 94 since July. The S&P 500 is currently trading around 58% higher than it was at the lows in March (also up some 70% since the November 2016 sell-off during the last presidential election).

Meanwhile, the situation on the ground for your average American couldn’t be starker. US unemployment throughout 2016 hovered at around 4.5 million, while it currently finds itself at 7.9 million, having fallen from a staggering 14.7 million back in April. Despite resounding calls for more fiscal stimulus, the package of unemployment benefits known as the Cares Act was brought to a xclose at the end of July and now appears to be off the agenda until after the election.

The United States and its population finds itself in a much more precarious situation in 2020 than it did in 2016. Aside from the economic consequences of COVID-19 and a cyclical downturn that seemed to be on the cards from back in 2018, recent events have revealed it to be more polarized along ideological, racial and generational lines. Even something as seemingly objective as the science behind pandemics and how to stem their spread has become a highly politicised issue.

But it’s the election itself that has market participants most concerned, with some fearing that a contested election result could result in nationwide disruption and market chaos. The distinctly uncollegiate first debate between Biden and Trump, in which neither candidate seemed willing to advise their more militant followers to stand down should a conclusive victor not emerge on the night, seemed to provide a confirmation of these concerns.

There has been a great rise in the casting of postal ballots due to changes in the law since 2016 to allow for, or expand, early voting by mail in certain states. These changes, coupled with the pandemic, mean that a certain contingent of voters (which skew slightly Democrat) have been casting their votes a month before the election. The manner in which postal ballots are processed makes it increasingly likely that a clear victor will not be announced on the night or even the morning after November 3.

This is particularly so if the numbers are close. In the event of anything other than a landslide for either candidate, we could see a situation in which Trump or Biden could refuse to concede defeat. Indeed, it has been reported that former presidential candidate, Hillary Clinton, has advised Biden to do just this and not concede on the night until all of the postal ballots are counted.

With US stock markets at or around their all-time highs and the DXY trading at 2-year lows, it’s becoming clear that markets have yet to fully price in the possibility that this election may not run as smoothly or be resolved as conclusively as the previous one was; and that’s despite the fact that Trump’s 2016 victory was something of a wild card that markets failed to foresee. The moral of the story?

Expect volatility to rise as the election draws near, and be prepared for surprises. Incidentally, this is true even if you don’t trade the dollar or equities. Even assets, like cryptocurrencies, which are usually removed from the above concerns, are likely to be shaken should we experience a messy and chaotic presidential election. Also, be aware that, excluding 2008, the US dollar has risen between 2% and 12% every year following a presidential election since 1980.