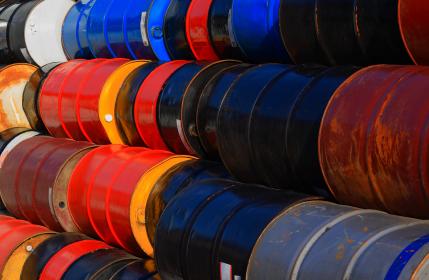 These are the significant reports this week in the US. See daily forecasts for more detail

Crude Oil is considered the king of the commodities markets.

The Strategic Petroleum Reserve is the United States’ emergency oil stockpile, and it is the largest emergency petroleum supply in the world. The reserve stores about 570 million barrels of crude oil in underground salt caverns at four sites along the Gulf of Mexico. Any dipping into this reserve is going to be big news.

Brent Crude is traded in London as something called Futures contracts, which are priced in US Dollars. Now, all you traders brave enough to run your positions over a period of days or weeks, pay attention here:
Oil spread bets are monthly contracts. This means that:
a) You don’t pay any rollover charges; the bet will run until the contract ends;
b) Now, get this, the spread bet runs out (contract expires) in the middle of the month before the month it says on the tin. So, for example, the Brent Crude August contract runs out (expires) on 14th July. How dumb is that?

West Texas Intermediate is the US equivalent to Brent Crude. Commonly known as US Light Sweet Crude (or any derivation of these words), it is called “US Crude” on the some platforms.

An alternative, less precise way of trading oil is through the equity market, but in my view this needs a good understanding of the underlying companies. For example, the rise in the oil price isn’t necessarily reflected in the major companies’ share price. This is partly because the cost and availability of refining impacts on the profit line and partly because, despite all the science, a large part of their business involves the costly process of sticking long poles in the ground and seeing if they come up black.

There are exceptions; smaller companies like Tullow Oil and Dana Petroleum are linked more to exploration than refining. Each new discovery seems to notch up a couple of quid on the share price. And they’ve got the added attraction that one of the majors might decide it’s cheaper to bid for them than to look for new reserves itself.

Effect on the FTSE
The Oil & Gas sector accounts for roughly 20% of the FTSE, so whatever happens to the oil majors will have quite an effect on the underlying market.

What to watch when trading
trading oil involves keeping an eye on a few different factors to the standard investment stuff. In addition to the run of the mill economic data that will gives clues as to whether the world’s factories are burning more or less oil there’re a couple of seasonal factors:

First, courtesy of Top Gear, there’s the US Driving Season

Now switch over to the weather forecast to see how windy it is. The US Hurricane Season officially runs from 1st June to 30th November, but don’t expect the forces of nature to pay too much attention to the dates. Hurricanes tend to hit the Gulf of Mexico, which is filled to the rafters with oilrigs (over 20 rigs went missing due to Hurricane Katrina in 2005).

Notice the seasonal rise in the oil price during the hurricane season.

On a smaller, less destructive scale watch out for particularly cold winters where the heating’s turned on full blast and, paradoxically, particularly hot summers in the US, where they prefer turning on the ‘aircon’ to sitting in the shade.

Next take a look at the world’s big oil producers. You won’t find oil gushing out of stable and predictable countries like Belgium, Sweden or Switzerland. No, putting aside the comparatively stable USA and Saudi Arabia, God blessed the world’s more colorful characters with the power and wealth of massive oil supplies. A short roll call includes Iraq, Iran, Libya, Nigeria, Venezuela and Russia, where a few well-chosen words from a president can send you sprinting to the ‘trade’ button.

And finally the most specific economic data to focus on are the US weekly oil and gas inventory figures, issued by the Energy Information Administration and released every week on Wednesday afternoons. If you trade oil you can’t afford to miss these.

Oil Trading Strategies
the choice here is between trading your views and using technical analysis keep in mind you’ll be up against specialists who might have the inside track on something.

With the easing of tension with Iran over the oil embargo, threats and reduced rhetoric, Oil dropped. This compounded by an improvement in the Nigerian strike, oil tumbled towards the end of the week. Dropping 2$ on Friday.

The HSBC preliminarily report on the China manufacturing survey showed little improvement in January, with weakness in output and new orders suggesting a deepening slowdown ahead. The news sparked worries over weakness in global oil demand.

Thursdays Gasoline Inventory report also showed more than expected in stockpiles, lessening the demand for crude. All factors pushed crude below the 100.00 mark.

Crude will most likely remain depressed for this coming week.