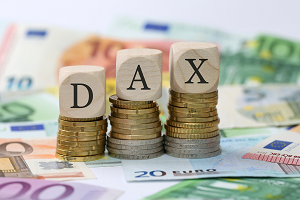 DAX has reached our short term target of 11400 which we had mentioned as our target when the index was below 10800. A couple of weeks back, the index finally broke through the top of the range at 10800 and burst through 11000 and has since been making slow but steady progress towards its target of 11400 which it has managed to reach. Things should get interesting now as we believe that there will be some correction in the index in the following days towards the broken support at 10800 but it remains to be seen how, when and under what circumstances the index will be reaching there, if at all.

Looking ahead to today, we have the German Ifo Business Climate which is likely to bring in some volatility. Germany has probably been the only country in the Eurozone that has been generally generating good economic data and has managed to maintain a strong economy and also a strong political scene with Merkel at the helm. This is amidst all the turmoil happening in the rest of the Eurozone and it is clear that Germany is by far, the best flagbearer for the Eurozone. The investors and the markets would hope that Germany would continue to come up with good data and maintain a strong and stable outlook as the Eurozone currently needs strong economies to keep itself afloat after the Brexit process.

Apart from this data, we do not have any other major economic data from Germany but the markets would continue to watch the US yields and as long as it remains high, the stock markets would also be in general cheer around the world. Any kind of weakness in this could affect the markets and could pave the way for a correction in the DAX which would be looked forward to by the bulls as it would then present them with an opportunity to go long on the index, especially for those who has missed out on the earlier ride.