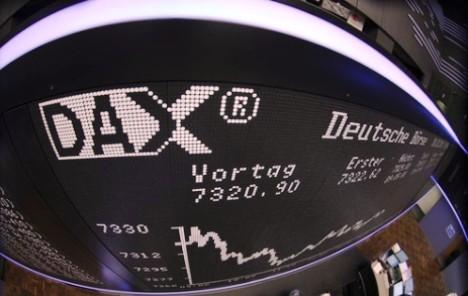 Germany equities were mixed at the close on Tuesday, as gains in the Utilities, Consumer & Cyclical and Chemicals sectors propelled shares higher while losses in the Media, Retail and Basic Resources sectors led shares lower. At the close in Frankfurt, the DAX rose 0.04%, while the MDAX index declined 0.41%, and the TecDAX index lost 0.84%. Advancing stocks outnumbered falling ones by 359 to 343 and 78 ended unchanged on the Frankfurt Stock Exchange. The DAX volatility index, which measures the implied volatility of DAX options, was down 0.64% to 18.07. Overall market sentiment on Tuesday in Frankfurt could be viewed as positive as German markets made the most out of temporary reprieve that European markets saw on Lira stabilizing in early Asian market hours of Tuesday.

German banks remain least exposed to Turkish crisis thereby providing a relatively favorable market for investors among dovish equity markets across Europe. However Turkish crisis is back in focus on Wednesday’s Asian session which is affecting EURO’s momentum in global market and is expected to push European equities on bear’s path in today’s market hours. Asian stocks retreated to a one-year low on Wednesday as bearish Chinese markets worsened investor sentiment already hurt by Turkey’s financial crisis. Investors tend to focus on negative aspects of listed companies’ first-half reports, as there is much pessimism and caution in a falling market. While the lira clung above record lows, tensions between Washington and Ankara remained on the boil, keeping the currency on a shaky footing.

However US equities closed on positive note yesterday and influence from Wall Street should help German market remain relatively neutral in this turmoil stricken European market scenario despite dovish influence from Asian equities. German DAX closed on positive note yesterday and is expected to open with uptrend movement as DAX futures trading in international market is moving on positive note up 0.20% on the day ahead of European market hours. German market could continue to remain positive as long as investors remain in neutral stance over ongoing geo-political & financial issues in Key European markets. When looking from technical perspective, price action in hourly and daily charts indicate continued range bound price movement near higher lows of August price movement.