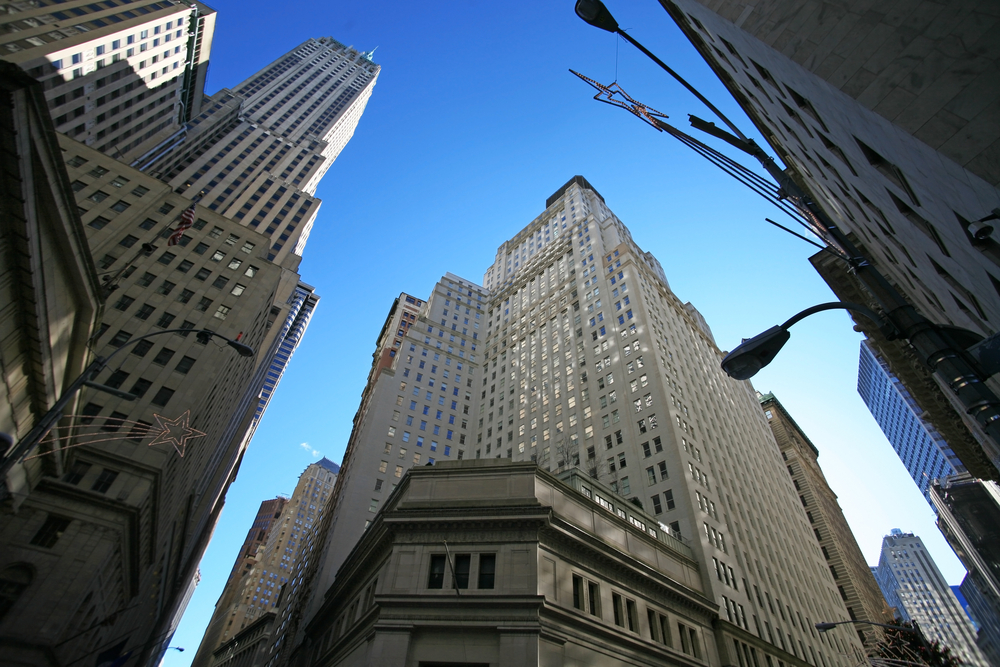 Equities are under pressure. Nearly all the markets in the Asia Pacific region and Europe are lower. The MSCI Asia Pacific is paring last week’s 1.4% advance, while the Dow Jones Stoxx 600 in Europe is off for the fourth consecutive session at six-week lows. Only the consumer staples and health care sectors are posting small gains. The S&P 500 futures are off nearly 0.5%.

The Dow futures are off more, while the NASDAQ futures are down a little less. Bonds are bid, and the US 10-year yield is around three basis points lows near 1.26%. Core European benchmark yields are softer, and most are trading at new three-month lows today. Peripheral bonds have come under pressure as the European morning progressed. The dollar rides high, with the Scandis and dollar-bloc currencies off leading the move with losses of mostly 0.3%-0.7%, with the Canadian dollar being tagged for more than 1%.

The yen is the notable exception, and it is posting modest gains. Emerging market currencies are all lower, led by the Czech koruna and South Korean won. Gold, which had been flirting with $1835 a couple of sessions ago, is testing the $1800 area. The OPEC+ agreement is pushing oil lower. September WTI is trading below $70. The next technical target is seen in the $66.80-$68.60 area. Copper is off for the fifth session in the past six.

OPEC+ struck a deal yesterday that had been rumored last week. The output will increase by 400k barrels a day next month. Gradually, the 5.8 mln barrels a day that have been shuttered will come back to the market. The key to the deal was the baseline of not just the protesting UAE, but others will be adjusted higher. The UAE’s baseline from where cuts will be measured was boosted to 3.5 mln barrels a day from 3.17 mln, and not quite what it had initially sought (3.8 mln).

Saudi Arabia and Russia saw their baselines increase by 500k barrels to11.5 mln. September WTI fell 3% last week, the most in three months. It was the second weekly decline after a nine-of-ten-week advance (~21%). While the political compromise resolves the immediate crisis, there are fissures with the bloc and, for many, the baseline may be than a little embellished.

The surge of the Delta virus and reports of a “Delta plus” mutation gaining ground is emerging as a powerful economic and political factor. The Reserve Bank of Australia meets on August 3, and there are already forecasts that it will take back its recent decision to taper (from A$5 bln a week to A$4 bln). The governing coalition is slipping in the polls, and the opposition Labour is now six percentage points ahead. According to Newspoll, satisfaction with the vaccine rollout has fallen to 40% from 53% in April.

Meanwhile, two polls show support for the Japanese cabinet is continuing to decline, and the pre-Olympic build-up is marred with new covid cases among athletes. The Kyodo poll showed support for the cabinet falling more than eight percentage points to 35.9%. A Mainichi Shimbun poll had the support rating falling four points to 30.

The dollar is trading near session lows against the Japanese yen in the European morning but has not taken out last week’s lows near JPY109.70. Below there is this month’s low, slightly above JPY109.50, which stands in the way of a move toward JPY109. The Australian dollar finished last week at new lows for the year, and follow-through selling has pushed it beyond the (61.8%) retracement target of the rally since the end of last October (~$0.7380).

The next important support area is not until closer to the $0.7230-$0.7250 area. The US dollar firmed for the second consecutive session against the Chinese yuan. It is at a six-day high near CNY6.4850. The greenback has been trading in the CNY6.45-CNY6.50 range for the past several weeks. The PBOC’s dollar reference range was the tightest to expectations (CNY6.4700 vs. CNY6.4705) for several sessions.

A bit of a caricature of”Freedom Day” in the UK has materialized. The health minister Javid, who recently returned to the government, acknowledged he tested positive for covid. Prime Minister Johnson and the Chancellor of the Exchequer have also been ordered into quarantine due to their contact with Javid. “Freedom Day” drops the mandatory mask-wearing and social distancing requirements.

Ironically, Israel, one of the most vaccinated countries, has reimposed some restrictions (e.g., mask-wearing indoors) dubbed “soft suppression” to avoid a fourth national lockdown due to the contagion of the new variant. Separately, there seems to be a dispute in the UK government over a potential GBP10 bln healthcare tax that the Prime Minister and Health Minister Javid are pushing for, but meeting resistance from the Chancellor of the Exchequer Sunak. In Germany, the polls have yet to show the impact of the flooding. The national election is in just over two months. CDU/CSU candidate Laschet’s attempt at jest seemed to go over like a lead balloon. The Green’s maybe in the best position to gain.

The economic highlight of the week is the ECB meeting followed the preliminary PMI. The central bank needs to bring its forward guidance into line with its redefined symmetrical inflation target of 2%. The adjustment is expected to begin preparing the groundwork that lifts the bar to an exit from the extraordinary monetary policy. In fact, it seems likely that what was once regarded as extraordinary–bond purchases, long-term loans at negative rates, and a negative deposit rate–will be part of the standard operating procedure even after the Pandemic Emergency Purchase Program is completed next year.

As we have noted, the ECB has not hiked rates since 2011, and even then, the move was seen as a mistake, and Draghi unwound the two hikes in his first two meetings as ECB President. The Bloomberg survey found a median expectation for the manufacturing PMI to ease a bit, while the service PMI is expected to quicken. The net result is a marginal new high in the composite PMI.

The euro’s 0.6% loss from last week is being extended today, and the single currency looks to be heading toward the low for the year set at the end of March near $1.1700. There may be some chart support around $1.1740. A move above $1.1820 would help stabilize the tone. We note that the latest Commitment of Traders shows that as of July 13, the net long speculative euro position is the smallest since last March at around 59.7k contracts, down from 165k contracts in early January. The fifth loss in six sessions has brought sterling to nearly $1.37, where the 200-day moving average is found. Sterling had not traded below this moving average since last September, when it was closer to $1.27.

The sell-off is pushing sterling through the lower Bollinger Band (~$1.3715). There is some old congestion around $1.3670 that may offer some near-term support. However, the next important chart area is not until closer to $1.3550. The net long speculative sterling position in the futures market fell by nearly 2/3 in the CFTC reporting week through July 13. At below 8k contracts, it is the smallest since early January.

A simmering dispute over the terms of the new North American free-trade agreement broke into the open last week. Ironically for many observers, in some important respects, the Biden administration is taking a tougher line on trade than Trump. This applies not only to China, where sanctions have been extended, and as we learned last week, there are no plans for regular high-level meetings on economic matters, as there were under Bush and Obama.

Mexico and Canada argue that the Biden administration is backtracking from the understanding struck with Trump officials about the technical rules for cars and parts shipped across the regional borders. As a result, they are threatening to launch a formal complaint under the terms of the treaty. If the case goes against them, it will be harder for Mexico and Canada to meet the thresholds. Yet rather than necessarily move production capacity to the US, as the US administration and the United Auto Workers seem to assume, producers in Mexico and Canada could forfeit the advantage and pay the WTO tariff schedule of 2.5% on passenger vehicles (and a much stepper 25% on light trucks).

The US economic calendar is dominated by housing markets reports (starts and sales) and the preliminary PMI at the end of the week. In addition to bills, the government auctions 20-year bonds and 10-year TIPS. Fed officials enter the quiet period ahead of July 27-28 FOMC meeting. The highlight for Canada is the May retail sales report on Friday, which is expected to be soft. Mexico also reports May retail sales at the end of the week, but before that, it will report the biweekly CPI measure.

Banxico meets on August 12, and the market appears to have about a 50% chance of a 25 bp hike discounted. Brazil reports July inflation figures, and another rise is expected (8.50% vs. 8.13%), which underscores expectations for another 75 bp when the central bank meets on August 4.

The US dollar has soared against the Canadian dollar, jumping through the 200-day moving average (!CAD1.2625) to reach CAD1.2780, its highest level since early February. The weakness in equities and oil are sources of pressure. The next important chart point is not until closer to CAD1.2850, the (61.8%) retracement objective of the US dollar slump since the end of last October. The greenback is now well beyond the upper Bollinger Band (~CAD1.2680).

The CAD1.28-area corresponds to three standard deviations from the 20-day moving average. The net long speculative position in the futures market was chopped by nearly 15k contracts in the week through last Tuesday, the most since last March. It stands near 26.4k, the smallest since early May. The US dollar is firm against the Mexican peso, but it remains below last week’s high (~MXN20.0820). The greenback continues to trade within last Tuesday’s range (~MXN19.8150-MXN20.8020). Speculators in the futures market have been net short the peso since the end of April.