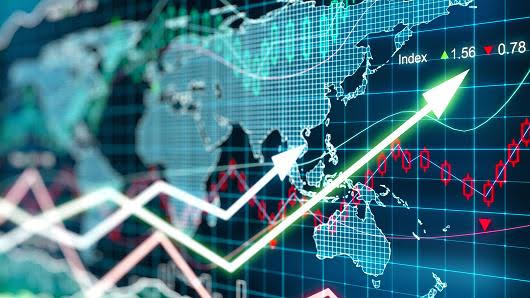 June E-mini Dow Jones Industrial Average futures are expected to open the cash market lower based on the early trade. The catalysts behind the selling pressure are concerns over the economy, worries over an expected weak quarterly earnings season, and position-squaring ahead of the release of the Fed minutes on Wednesday.

The main trend is up according to the daily swing chart. A trade through 26509 will signal a resumption of the uptrend. The market is in no position to change the main trend to down, but there is room for a short-term correction.

Based on the early price action and the current price at 26265, the direction of the June E-mini Dow Jones Industrial Average on Tuesday is likely to be determined by trade reaction to the downtrending Gann angle at 26381.

Overtaking and sustaining a rally over 26381 will indicate the presence of buyers. This could trigger the start of a labored rally with potential target angles coming in at 26445 and 26477. The latter is the last potential resistance angle before the 26509 main top.

Taking out 26509 will signal a resumption of the uptrend. This could trigger a rally into an uptrending Gann angle at 26654. Crossing to the strong side of this angle will put the Dow in a bullish position.

A sustained move under 26381 will signal the presence of sellers. If this creates enough downside momentum then look for the selling to extend into the next uptrending Gann angle at 26081.