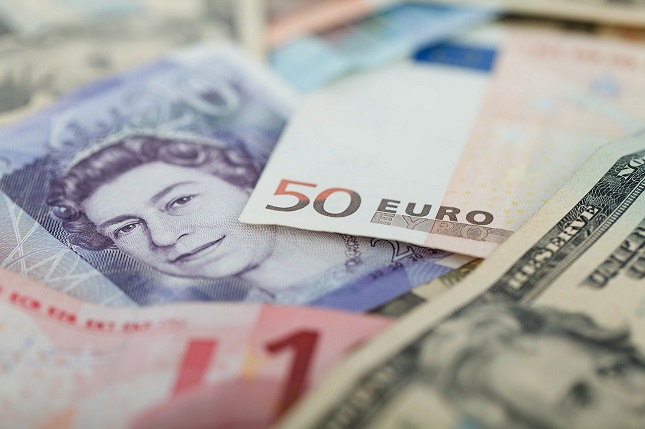 The EUR/USD moved higher on Tuesday for the 3rd consecutive trading session, following an as expected inflation figure reported in the U.S. Both the headline and core readings were in line with expectations putting a cap on U.S. yields. U.S. chain store sales rebounded in the latest week, and small business optimism rose to the second highest level on record.

The EUR/USD moved higher rebounding from support near the 10-day moving average at 1.2329.  A close below that level would lead back to a test of the February lows. Resistance is seen near a short-term downward sloping trend line that comes in near 1.2420.  A close above that level could lead to a test of the February highs at 1.2555.  Positive momentum is accelerating as the fast-stochastic surges above the 84 level following Friday’s crossover buy signal. The current reading is above the 80-overbought trigger level which could foreshadow a correction. Momentum as reflected by the MACD (moving average convergence divergence) histogram is printing near the zero index level with a flat trajectory which reflects consolidation.

U.S. CPI Came out in Line with Expectations

U.S. CPI rose 0.2% in February for both the headline and core rates There were no revisions to January gains of 0.5% and 0.3%, respectively. Both came out in line with expectations. The 12-month pace accelerated to 2.2% year over year, which is the fastest since last March, from 2.1% year over year previously for the headline, but was flat at 1.8% year over year for the ex-food and energy component. Energy costs were up 0.1% last month versus 3.0% in January, with transportation unchanged after the 1.8% gain previously. Apparel prices remained firm, up another 1.5% after surging 1.7%. Housing costs increased 0.3% versus 0.2%, with owners’ equivalent rent up 0.2% versus the prior 0.3%. Food/beverage prices were unchanged. Medical care costs dipped 0.1%. Personal computer prices dropped 1.2%. The data aren’t surprising and shouldn’t be problematic for the FOMC, leaving the gradual tightening approach in place.

U.S. chain store sales rebounded 0.6% in the week ended March 10 to 115.5 after falling 0.8% to 114.8 in the March 3 week. This breaks a string of three consecutive weekly declines, even as the Nor’easter that hit the east coast damped sales. The annual pace accelerated to a 2.8% year over year sales clip from 1.9% and is the fastest since late January. And according to the report, retailers reporting Q4 comparable sales and earnings show one of the strongest sales period in years.

The ECB’s Lane worried about potential EUR volatility. Mirroring other ECB officials, the Irish central bank head said while there is “no concerns about the current level” of the single currency, “if it moves a lot within a short time interval then you have to think about the implications”. Nothing really new there, but potential currency implications are likely a reason the ECB is only very cautiously inching towards the exit from net asset purchases.

Spanish Feb HICP inflation confirmed at 1.2% year over year as expected. The pick up from 0.7 %year over year in the previous month reversed the dip in the headline rate at the start of the year that was mainly due to base effects from housing. The HICP rate remains far below the ECB’s 2% limit for price stability, but central bankers are starting to see encouraging signs in underlying inflation and seem more optimistic that inflation will gradually trend towards target.