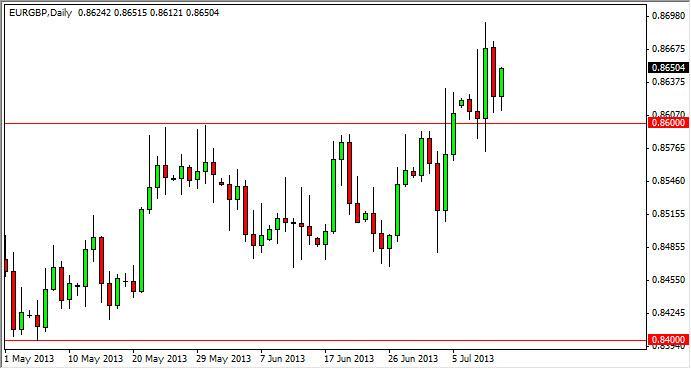 The EUR/GBP pair fell hard on Monday as traders abandoned the Euro in droves. Although there was good news coming out of the meeting between Sarkozy and Merkel in the form of a framework for fiscal union, the afternoon saw a sell off as the S&P ratings agency said at they are putting 15 Euro countries on “Credit Watch Negative”. As this was announced, the Euro got hit across the board.

This pair is essentially an argument of two unloved currencies. The Pound isn’t exactly one that the trading community has been excited about either. The result has been an extremely range bound market that has been stuck between 0.8650 and 0.8500. The range should continue to be the outer limits of this market, and it will take some kind of special move in order to make this pair escape that area. However, once it does – this pair could go onto a larger move overall. The most recent trend has been somewhat negative, but not impressively so. Because of this, we feel that the rallies are to be sold as it seems to take less to push this pair down than it does to lift it up.

The UK economy is heavily exposed to the EU as well, as 30% of the UK’s exports end up in the EU. Because of this, as the Europeans enter recession; this will significantly impact the economy of the UK in the longer-term. With this in mind, this pair will continue to be choppy and range bound, and this pair might have a downward bias – but the truth is that Europe’s pain is also the United Kingdom’s pain. The pair should continue ot be range bound for the foreseeable future, barring any real meltdown in Europe.