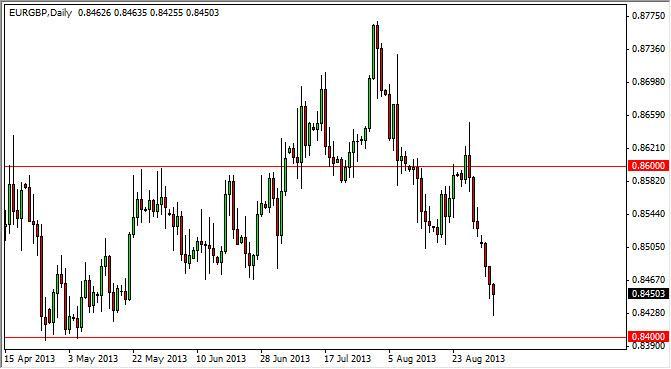 EUR/GBP saw a nice rally during the Friday session as the markets traded in light volume. The pair is more than likely being influenced by the withdraw of British banks from the European Union. The pair has recently broken down through the 0.85 level showing a massive breach of support as well, and this sets up a bearish case for this pair going forward.

However, the bounce on Friday should be respected, and the candle was impressive. The 0.84 level has a cluster that could offer resistance at this point, and we would be willing to sell on signs of weakness there. Noting this, we also have to look at the 0.85 level as a potential selling area as well since it was so supportive previously. Classic technical analysis suggests that we should see some kind of “retest” of the area, and we are more than willing to sell a bearish candle at that point as well.

The British economy will be hurt by the recession that is almost undoubtedly coming to Europe as the UK exports 30% of its goods to that region. Because of that, we think this pair will continue to fall, but it might not be overly steep in its trajectory. The move down could be a slow and steady grind, which describes the moves in this pair 90% of the time anyway.

The breaking back above the 0.85 level would have us rethinking this market, but until that happens we cannot suggest buying this pair at all – even if we see the bounce coming. A breaking of the lows on Wednesday could have us selling as well, but the area is the start of a decent cluster of orders from months back. This keeps us hoping for a slight bounce from which to sell, which of course is not only following the overall recent trend, but it also has the ability to give us more momentum to fall from higher levels. The pair will continue to be one to watch going forward as we fully expect the downward momentum to continue, but perhaps after a small but welcome bounce.