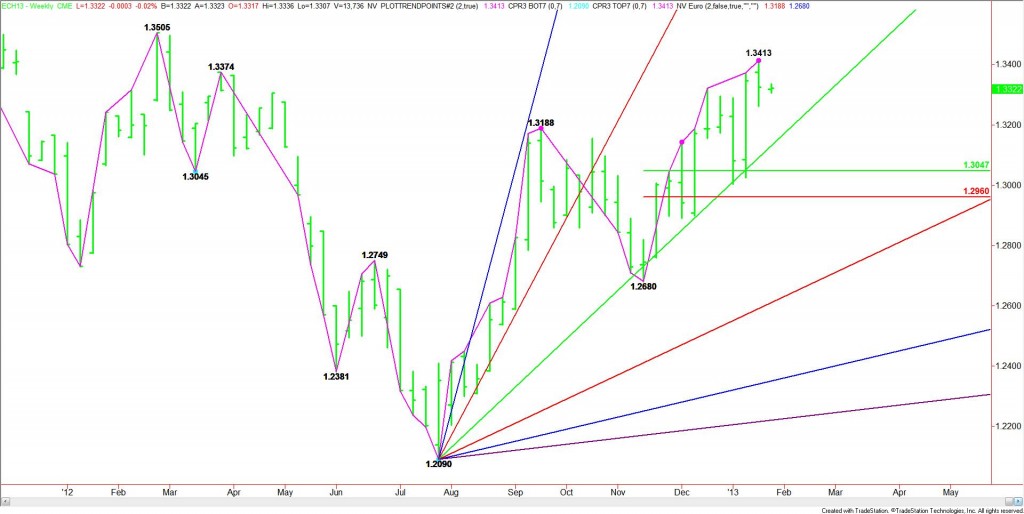 After a 9 week rally, the March Euro posted a closing price reversal top last week. This chart pattern often signals the start of a 2 to 3 week break, but not necessarily a change in trend. The key is the confirmation. While come consider the formation an outright sell signal or reason to take profits, without the follow-through to the downside, it is just a sign that the selling may be greater than the buying at current price levels.

Last week’s low is 1.3262. A trade through this price with conviction will confirm the closing price reversal top at 1.3413. Based on the short-term range of 1.2680 to 1.3413, the main downside target is the retracement zone at 1.3047 to 1.2960. If everything goes as planned, the Forex pair should trade inside of this retracement area by the week-ending February 1.

Standing in the way of a straight drop into this price zone is an uptrending Gann angle at 1.3130 this week. Since this angle has held for 26 weeks, buyers are likely to step in on the first test. This could trigger a technical bounce to the upside.

A failure to confirm the closing price reversal top or a trade through 1.3413 will trigger a resumption of the uptrend.

Fundamentally, after posting a strong gain earlier in the week on a friendly Spanish debt auction, the March Euro reversed course. One reason for the start of the decline was a poor reaction to data from China which showed the world’s second-largest economy grew faster-than-forecast in the second quarter. This surprise reaction curtailed demand for higher risk assets, triggering a round of aggressive profit-taking in the single currency.

Later in the week, traders blamed comments from European Central Bank board member Benoit Coeure for extending the decline. It was reported that Coeure said he does not expect banks’ repayments of long-term loans to affect the euro overnight interbank rates. Talk had been circulating that early repayments of the loans would likely put upward pressure on interbank rates, because banks would have to turn elsewhere for short-term funding. Traditionally, higher short-term rates would attract buyers, driving up the currency.