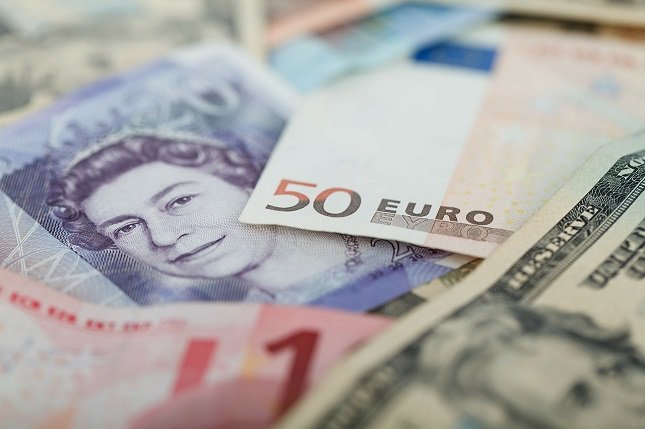 The EUR/USD moved higher as U.S. yields moved lower faster than their European counterparts. European yields headed south, but rebounded from their lows following stronger than expected PMI readings revived tapering speculations. All eyes are now focused on Draghi and Janet Yellen say when they speak at the Jackson Hole conference on Friday.

The EUR/USD recaptured the 1.18 handle and is poised to test target resistance near the August highs at 1.1910. Support on the currency pair is seen near the 10-day moving average at 1.1774.  The next level of target support on the currency pair is seen near the August lows at 1.1661. The exchange rate is forming a bull flag pattern which is a pause that refreshes higher.  Negative momentum is decelerating. The MACD (moving average convergence divergence) index is printing in the red, while the MACD histogram is moving higher which reflects consolidation. The relative strength index (RSI) which is a momentum oscillator that measures accelerating and decelerating momentum, is printing a reading of 59, which is in the middle of the neutral range and reflects consolidation.

German PMIs Were Stronger than Expected

German PMIs surprise on the upside, with the manufacturing reading jumping to 59.4 from 58.1 and the services reading rising to 53.4 from 53.1, bringing the composite to 55.7 from 54.7 in July. This followed mixed French numbers, which saw a dip in the services reading, but a rebound in the manufacturing PMI that left the composite unchanged at 55.6.

Eurozone preliminary August PMI unexpectedly improved in the composite number. Individual readings were mixed, but the unexpected rise in the manufacturing reading to 57.4 from 56.6, still helped to compensate for the dip in the services reading to 54.9 from 55.4 and left the composite at 55.8, up from 55.7 in the previous month. Expectations had been for a steady to lower number. The ECB has already acknowledged that the recovery is strengthening, but remains firmly focused on still weak inflation and wage growth, arguing that the recovery still needs substantial monetary support.

Eurozone PMIs suggest inflation is on the mend, with Markit reporting that the “recent trend of easing inflationary pressures came to an end in August, with cost inflation picking up for the first time since February”. At the same time, the manufacturing PMI showed that manufacturing orders were boosted by “the fastest rise in exports for six-and-a-half years”. So quite a bit there to boost the arguments of the hawks at the ECB and dampen concerns about the strong EUR. No wonder then that tapering concerns are picking up again, although so far officials haven’t agreed on the future for QE yet and Draghi and the other top dogs at the ECB are hardly in the hawkish camp, so it still seems unlikely for Draghi to force the committees hand by committing to tapering already at this week’s Jackson Hole speech.

Draghi States the QE and Forward Guidance are a Success

Draghi hails QE and forward guidance as success, saying that research showed that while forward guidance is “a useful instrument” “its effectiveness can be improved with other non-standard monetary policies”. Speaking at a conference on economic science Draghi said “research has confirmed that central banks are not powerless at the effective lower bound”, but stressed that policy makers must continue “preparing for new challenges”, and that “when the world chances”, policies and “especially monetary policies need to be adjusted”. Nothing there that directly refers to the future of QE.

U.S. MBA mortgage market index sank 0.5%, while the purchase index fell 1.5% and the refinancing index rose 0.3% for the week ended August 18. The average 30-year fixed mortgage rate was flat at 4.12% for the week as yields rose into the relatively dovish FOMC minutes, only to fall back later in the week with stocks amid the controversy over Trump’s handling of Charlottesville before stabilizing again. Lingering concerns about N. Korea and terror attacks in Barcelona fanned safety premiums as well. The housing sector continues to perform admirably while rates remain low, propelled by solid demand, employment growth and low rates, though constrained somewhat by low inventories and high prices.