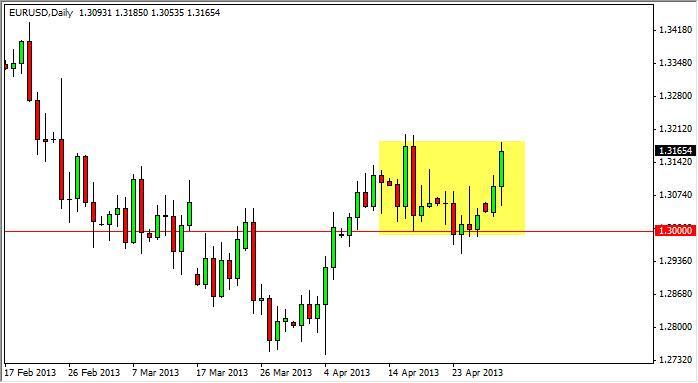 EUR/USD rose again during the session on Thursday as the “risk on” move came back into the markets in general. The stock markets gained, and the optimism increased during the session judging by the rise in such places as Paris, Frankfort, New York, and London. However, the gains were given back later in the session and the daily candle formed was a shooting star, the second one in a row.

The pair currently sits on a massive support zone at 1.30 that is suspected to be at least 100 pips thick. The 1.29 level looks like the mark that the pair will have to break below in order for massive selling to ensue, something that many people have been expecting for a very long time in this pair, but have yet to see. The situation in Europe is dire, and the currency simply refuses to die at this point. There are many traders out there calling for the currency to fall precipitously from here, but it has yet to happen.

There are many different theories as to why, but the truth is that the only thing that matters at the end of the day is that it hasn’t fallen. The level is far too strong at this point to be ignored, and the lack of volume at this time of year puts a lot of doubt on the idea of the market collapsing from this point. However, the bias must certainly be to the downside at this point.

We have been selling rallies in this pair and doing quite well by it. The same strategy will be used by us going forward, and we will not hesitate to sell every time this pair rises in the near future. The situation in Europe simply is far too complex for a quick fix, and the market will more than likely continue to punish the Euro over time. Because of this, we are willing to sell rallies going forward, and would get extremely aggressive to the short side if the daily charts can show a close below the 1.29 level.