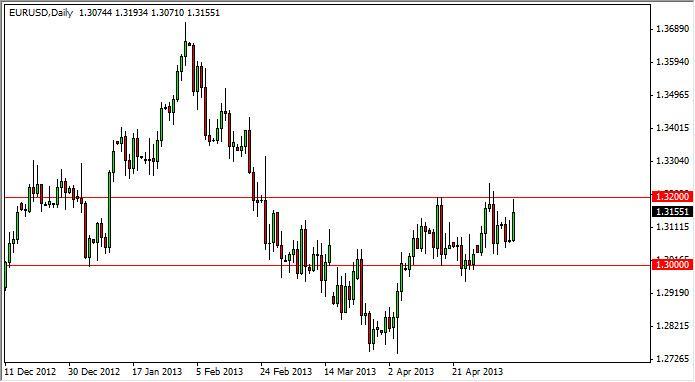 The EUR/USD pair fell again on Tuesday as the markets continue to sell risk related assets. The announcement of the cancelled EU Finance Ministers meeting on Wednesday also sent a shudder through the markets as well. The fact that the Financial Ministers weren’t meeting suggested that a Greek bailout wasn’t coming, and as a result the markets sold off the Euro and other “risky” currencies.

The later hours saw an announcement that the presumed incoming Greek PM was willing to sign a pledge to continue with the austerity measures after his possible election, and this was considered to be a major hurdle cleared for the moment. The market simply doesn’t want to get too excited by this, but there was a positive reaction none the less.

The result was a bounce of about 50 pips at the end of the day, and a candle that looks more like a doji than the rout that it really was most of the day for the Euro. The sellers retreated, but is should also be noted that there are many other obstacles for the Euro going forward, and as a result there are massive headline risks out there. The pair will continue to act erratically as the headlines shove it back and forth, but the recent action has made it clear we are in the middle of a larger consolidation area.

The 1.3250 level above is where we start to see resistance in a major way, and the 1.30 level below is the start of a support level that looks tough. Because of this, expect a lot of fighting to continue in this pair, but the bulls will certainly have their work cut out for them in the end. The truth is that the EU cannot afford this expensive Euro much longer, and there will be a fight to devalue it in the end.

We are selling sub-1.29 and buying once we clear the most recent area and the shooting star. We think that the 1.35 level will be even more resistive than the 1.3250 – so any rallies will have a limited shelf life.