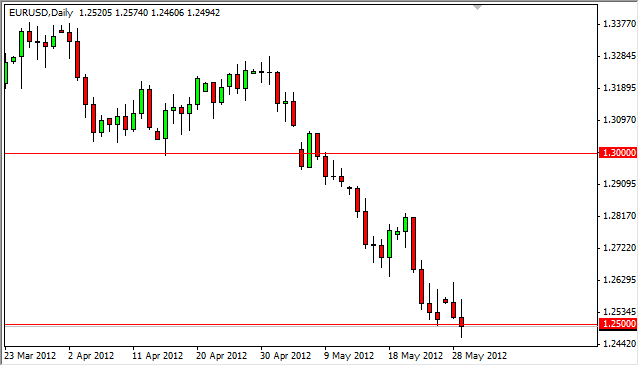 The EUR/USD pair managed to break down below the 1.25 level on Tuesday, but bounced back in US trading as the Americans have yet again come to the rescue of the Euro. This has previously been a bit of a pattern as the Europeans and Asians seem to want nothing to do with the Euro, while the Americans are more than willing to buy it.

The bounce in the late hours made the daily candle a doji that is sitting right at the 1.25 support level. While this pair certainly looks due for a bounce, we aren’t quite ready to buy it as there are simply far too many headline risks at the moment in order to think that the future of the Euro is bright. The situation in the European Union is far more complex than most originally thought, and because of this there seems to be many other potential landmines out there from which to shock the markets. With this in mind, it just makes no sense to risk “catching a falling knife” at this point.

The doji suggests that there is going to be a bit of a struggle at this level, and being a large “round number”, it isn’t exactly a surprise. After all, there are a lot of funds that will step in at these large areas, and as a result they almost always cause some kind of reaction in the markets. The fact is though, the Euro is living on borrowed time at this point, and the pressure is still to the downside.

The action for the session suggested that it will take something kind of special in order to keep falling, but this jives well with the candle formation. Because of this, we feel that a break of the bottom of the doji for the Tuesday session is a great sell signal as it shows another “attack” at the support area, and another gain by the sellers. Of course, we could rally as well, but in the end the rallies will only be chances to sell the Euro at a higher price.