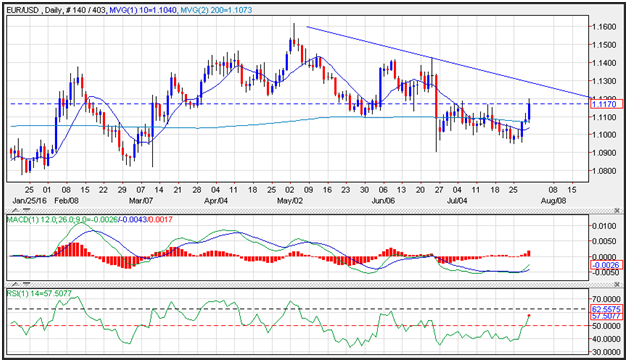 The EUR/USD surged following the U.S. Q2 GDP miss which came in nearly half of expectations. The currency pair ripped higher and is poised to test resistance near a downward sloping trend line that connects the highs in May to the highs in June and comes in near 1.1266. Support is seen near the 200-day moving average at 1.1073. Momentum has turned positive as the MACD (moving average convergence divergence) index recently generated a buy signal. This occurs as the spread (the 12-day moving average minus the 12-day moving average) crosses above the 9-day moving average of the spread.
[wibbitz]bbafd6eea97ce40f0a30f597800d7ca9a[/wibbitz]
U.S. Q2 GDP growth rose only 1.2%, less than half of what was forecast, following a downwardly revised 0.8% Q1 pace, and only 0.9% in Q4. Business fixed investment was a big drag, falling 3.2% after Q1’s 0.9% drop, with a 6.1% decline in residential spending, and a 2.2% slide in the non-residential sector.