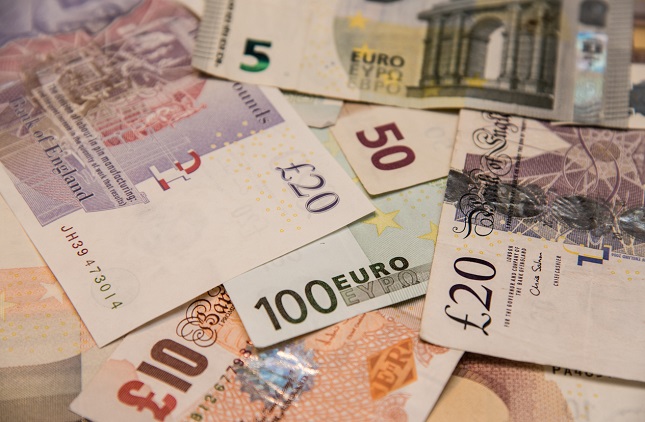 February, as you can see, remains considerably off worst levels and recently entered positive territory, trading 0.2 percent higher. Closing the month out at current prices, in the form of a hammer candle (bullish signal at troughs), is likely to excite candlestick enthusiasts.

Up by 0.3 percent, the concern for buyers remains around 1.2190 tops, with subsequent upside interest to likely take aim at Quasimodo resistance from 1.2278.

RSI action is now firmly north of the 50.00 centreline and within striking distance of resistance at 60.30.

Downstream, technical focus is likely to be drawn towards Monday’s session low at 1.2091.

With reference to the RSI indicator, we are currently seeing the value depreciate beneath overbought terrain and form early bearish divergence. This suggests the line may swing beneath the 50.00 centreline today.

Monthly price trading off session lows, currently shaped by way of a hammer candle—commonly interpreted as a bullish signal (particularly at troughs)—suggests daily price could perhaps take on 1.2190 tops and potentially invade Quasimodo resistance at 1.2278.

H4 Quasimodo resistance-turned support at 1.2149, coupled with 1.2150 support on the H1, could be a location buyers attempt to step forward from today, targeting 1.2179 and 1.2200 resistance on the H4 as primary hurdles.

Up by 3.6 percent, February is on track to conclude in the shape of a clear-cut bullish engulfing candle. Also technically appealing is the pair closing in on 0.8303/0.8082—a supply zone aligning closely with trendline resistance (prior support – 0.4776).

Reinforced on the back of commodity prices and a sliding greenback, AUD/USD extended Friday’s impressive 1.3 percent advance on Monday and crossed swords with supply at 0.7937/0.7890. So far unable to attract much bearish flow, traders are urged to pencil in supply coming in from 0.8045/0.7985 (located south of monthly supply at 0.8303/0.8082).

Despite Monday’s session clocking fresh 2021 peaks, short-term action shows price marginally paring gains and on the verge of reconnecting with 0.79 support. Though continued downside shines light on demand at 0.7857/0.7877, while a 0.79 rejection may stir buyers and subsequently target 0.7950 resistance.

Out of the RSI indicator, resistance is in focus from 80.85, with the value also threatening to exit overbought territory.

Short term is also relatively positive for buyers, with a 0.79 retest (H1) potentially on the cards, bolstered by H4 support priced in at 0.7897.

Following January’s bullish engulfing candle, buyers have attempted to find some grip in February. Although up by 0.4 percent, price is currently fading session tops.

Descending resistance (not considered traditional trendline resistance) takes the spotlight to the upside, etched from the high 118.66, whereas support inhabits 101.70.

The US dollar remained on the ropes against the Japanese yen Monday, weighed by broad USD selling (DXY < 90.00), despite the benchmark 10-year US Treasury yields refreshing multi-month highs at 1.394%.

February 10th trough at 104.40 calls for attention to the downside, arranged just ahead of demand at 103.56/103.93. This is an interesting zone, given it was within this area a decision was made to generate seven back-to-back bullish days and penetrate a number of local peaks.

With respect to the RSI indicator, following earlier bearish divergence out of overbought territory, the value is now beneath support at 57.00.

For those who read Monday’s technical briefing you may recall the following:

As you can see, bearish bets lured the currency pair to demand at 105.26/105.14 (prior supply). Friday’s price action derived from the demand area so far has been uninspiring, forming two back-to-back candles that wrapped up significantly off session highs. Beyond the aforesaid demand, trendline support, etched from the low 102.59, is lying in wait.

As evident from the H4 chart, we navigated through remaining bids within demand on Monday and are now within close range of the aforementioned trendline support, which happens to coincide with a Fib support zone made up between 104.64 and 104.83 (green).

Heading into London’s morning session, we can clearly see sellers took the wheel, aided by trendline support-turned resistance, taken from the low 104.41, and the 100-period simple moving average at 105.71.

Quasimodo support at 105.27, as expected, provided little in the way of a floor on Monday, with the majority of buying from here likely consumed during Friday’s pullback. This led the unit to 105 support (fastened just ahead of Quasimodo support at 104.91), holding in line with the RSI indicator bottoming around oversold space.

Therefore, we might see buyers show some life from 104.64/104.83, though given higher timeframes potentially eyeing 104.40, upside may be short-lived.

In terms of trend structure, however, the primary trend has faced lower since early 2008, unbroken (as of current price) until 1.4376 gives way—April high, 2018.

In effect, 1.4376 represents the next upside objective on the monthly chart.

The British pound rose against the US dollar on Monday amid optimism surrounding the UK’s vaccination rollout program.

1.4250 Quasimodo resistance is now in sight, thanks to GBP/USD recording a third successive daily gain and taking on resistance at 1.4011 (now serving as a potential support).

The RSI continues to trek overbought terrain, reaching highs of 74.40 on Monday. Bear in mind, the indicator can remain overbought for prolonged periods in trending environments.

In light of yesterday’s movement retesting the big figure 1.40 as support, 1.41 may call for attention today. Though before we touch gloves with the latter, a retest at demand from 1.3995/1.4035 could play out.