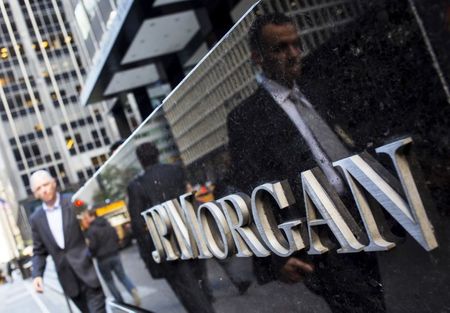 The financials and banking stocks have been some of the best performing of the reflation trade since the second half of 2020. Banks in particular have benefitted handsomely from the rise in yields and steepening of the yield curve. Since last October, the KBE banks ETF is up roughly 100%, rewarding investors who saw fit to take advantage of the immense value on offer at the time. However, there are a number of signs suggesting now may be a prudent opportunity for investors to begin to take profits and redeploy capital elsewhere.

Firstly, from a valuation perspective, the group can no longer be considered cheap on a relative or absolute basis. Of the “big four” banks, JP Morgan Chase and Bank of America are trading at their highest valuations in a decade, as measured by price to book value. 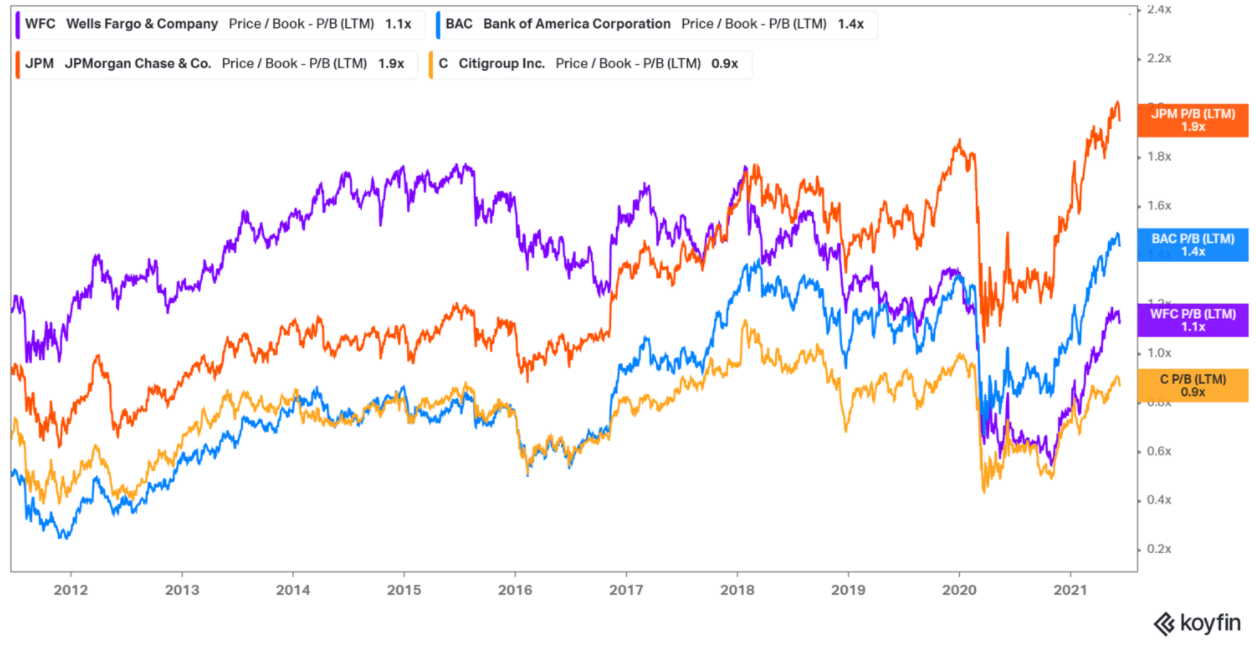 On the whole, we know banks like to make their profits by lending long-term and borrowing short-term. With long-term yields looking to have stalled for the time being, or perhaps even rolling over, the yield curve did not confirm the recent highs in the sector. It looks as though banks may have some catching up to do on the downside. 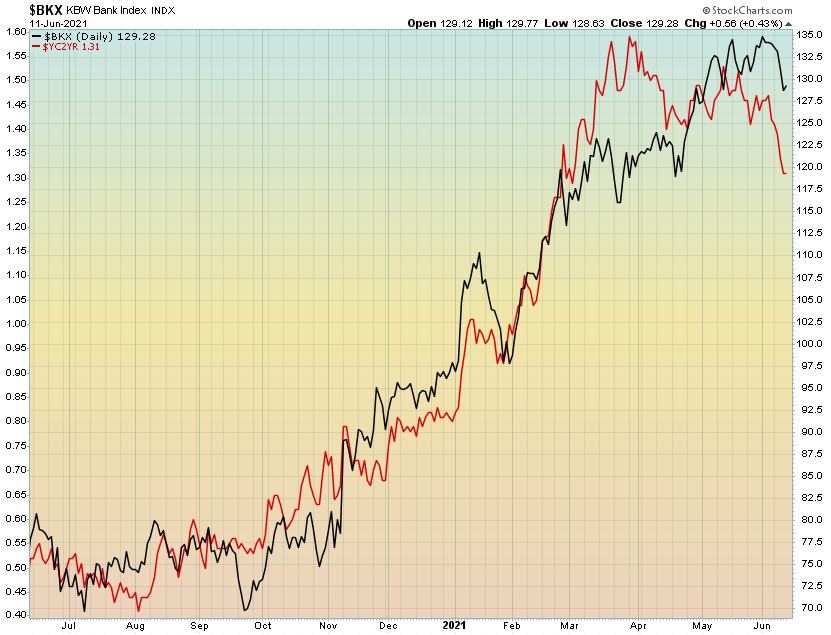 As banks and financials have largely proven to be a de-facto short-bonds trade of late, the bond market is sending a similar message as the yield-curve. 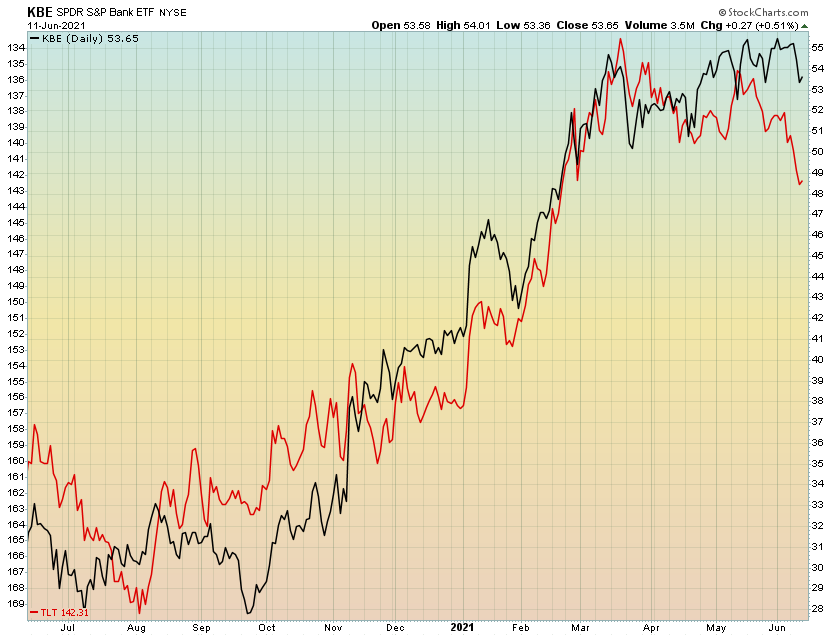 For the banking sector to continue its outperformance, it needs the tailwind that rising yields provide. With the US 30-year yield recently breaking its uptrend to the downside, it is looking as though this tailwind may be turning into a headwind for the time being. A move down to the 200-day moving average would put the 30-year yield at around 1.9%. 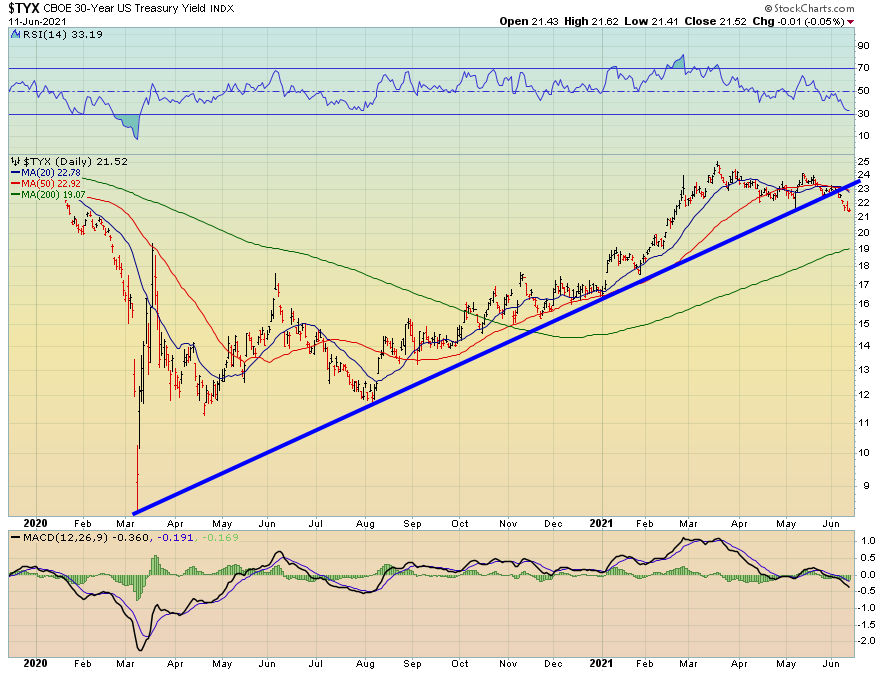 Additionally, there is strong overhead resistance for yields around their current levels. This breakdown coincides with the 30-years recent rejection of said resistance.

Couple this with the fact that small speculators (i.e. the “dumb money”) in the 30-year treasury futures market remain nearly as short as they have ever been, all the while commercial hedgers (i.e. the “smart money”) remain heavily net-long. Such positioning in the past has usually preceded favourable performance for bonds, and thus seen yields fall. 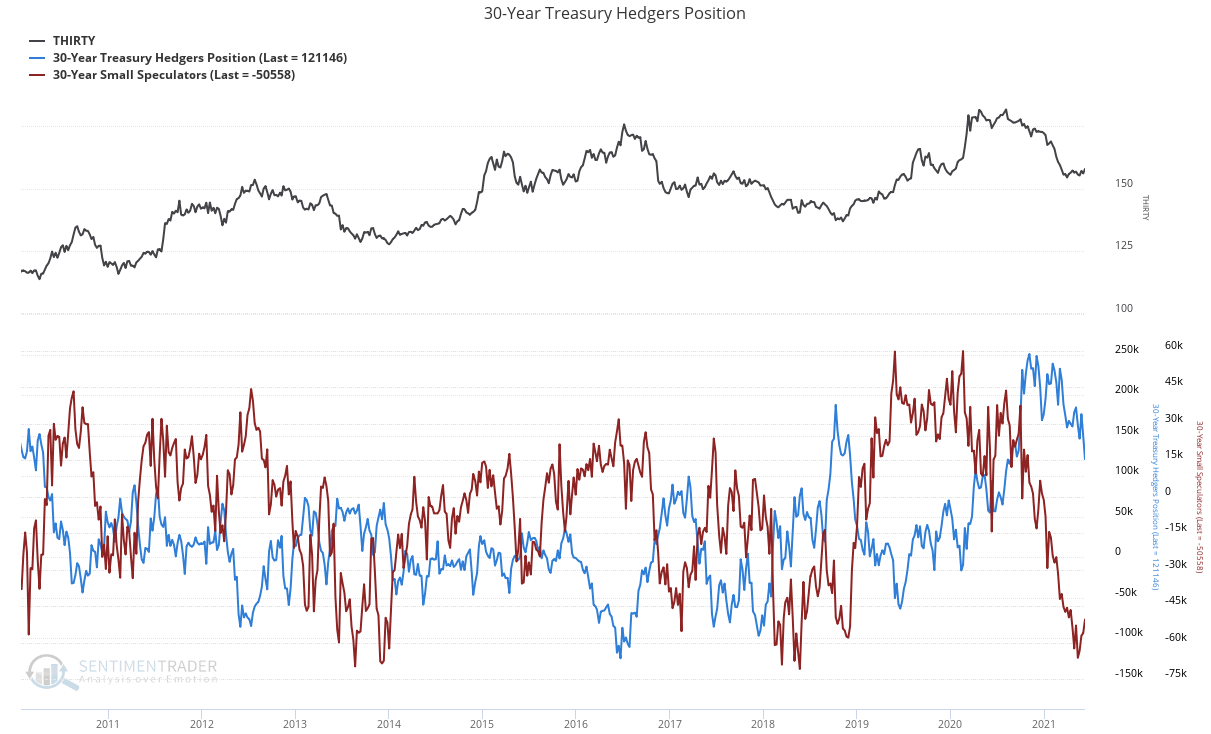 What’s more, we are now entering a seasonally favourable period for bonds and conversely an unfavorable period for yields. This adds to the bearish headwinds for financials. 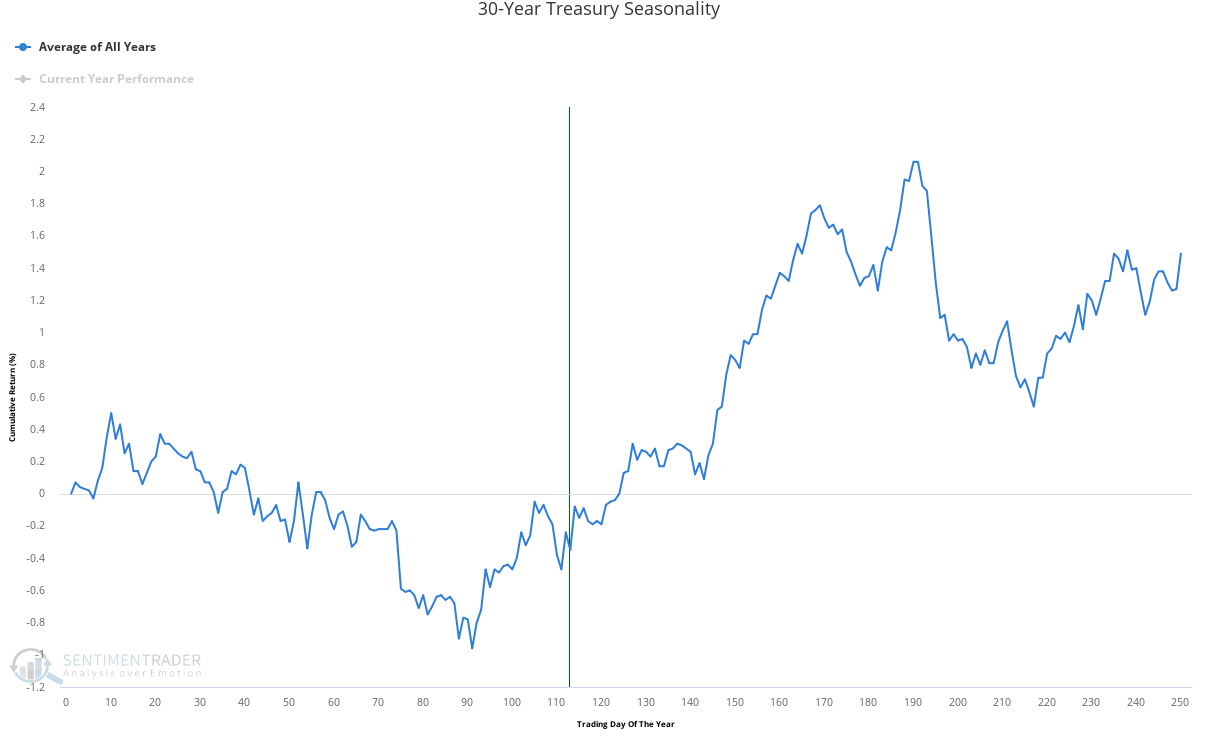 Turning to the technicals of the financials sector itself, a number of indicators are signaling exhaustion. We are seeing DeMark setup and countdown 9 and 13’s trigger on the daily, weekly and monthly charts. When such exhaustion signals begin to appear on multiple timeframes simultaneously, it is generally a fairly reliable indication a pullback, or at the very least a period of consolidation, is imminent. The 9-13-9 is considered one of the most reliable of the DeMark sequential indicators.

Focusing on the daily chart of the financials sector ETF, we have just seen a breakdown of its ascending wedge pattern. This coincides with bearish divergences in momentum (RSI) and money flow, in conjunction with the aforementioned daily DeMark 9-13-19 sequential sell signals. 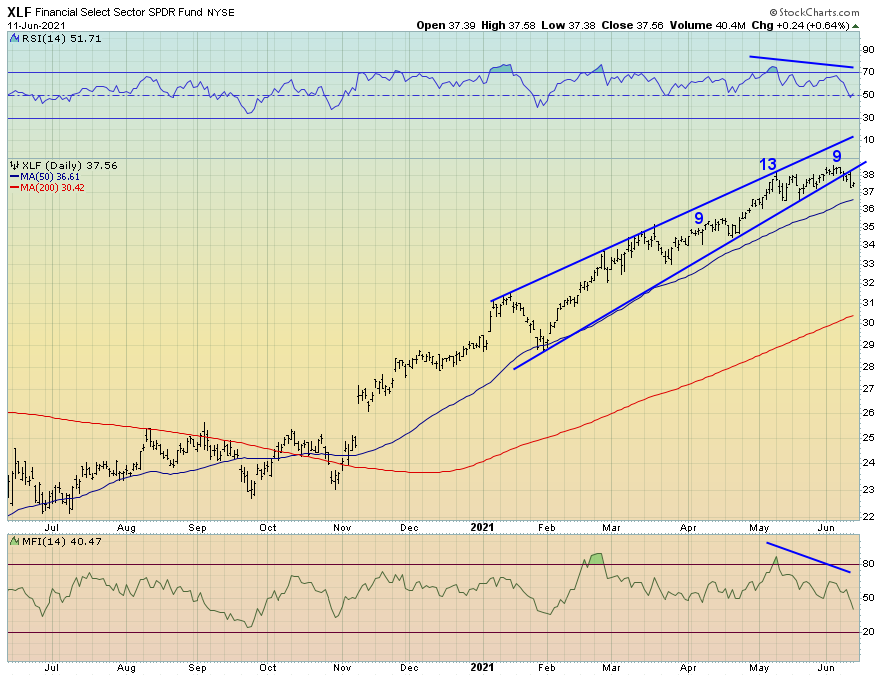 A rally to test the underside of the broken trendline could be an attractive point for those looking to take profits, or for those who are so inclined to trade from the short-side. Additionally, seasonality of the financials sector is also signaling that it may be time to take a bearish, or less bullish, stance towards financial stocks. 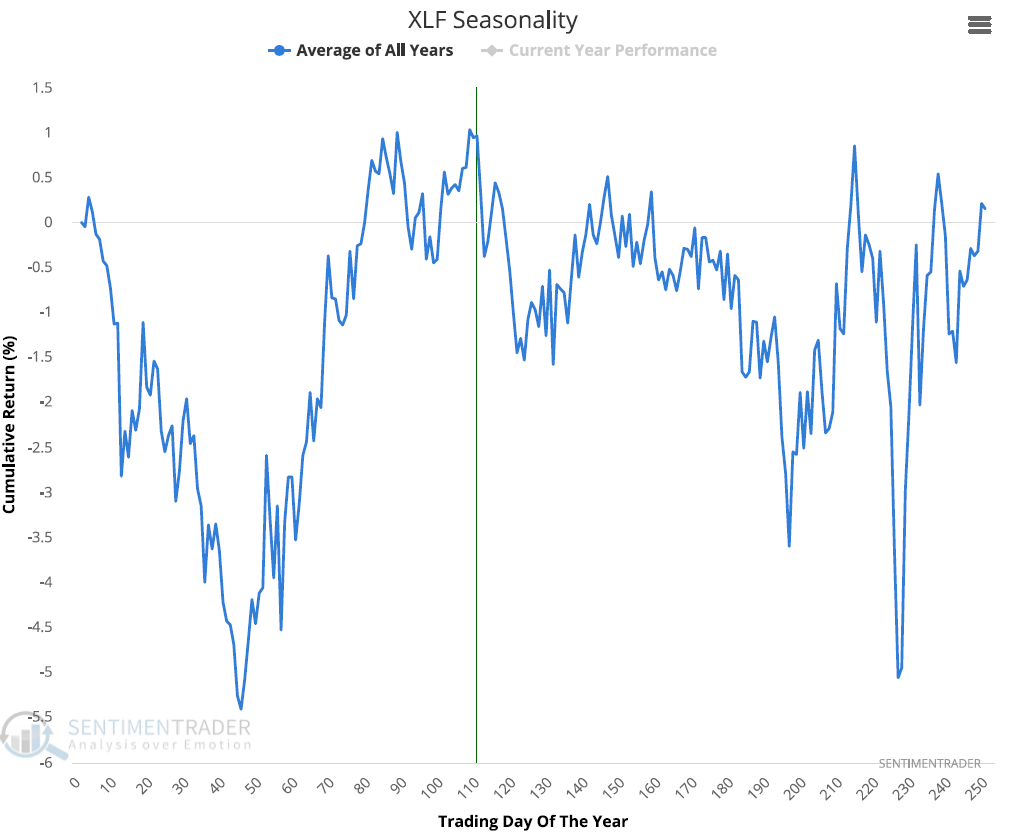 In summary, the risk-reward setup for banks and financials in the short-term does not appear to be overly favourable, nor do these companies offer the kind value they provided last year. Depending on your intermediate to long-term outlook for the direction of interest rates and whether your are in the inflationary or deflationary camps, a potential pullback may provide an attractive buying opportunity for the inflationist. For the deflationists or for those who believe rates may be peaking, this may be a good time to take profits and redeploy capital in alternative opportunities set to benefit from falling rates.