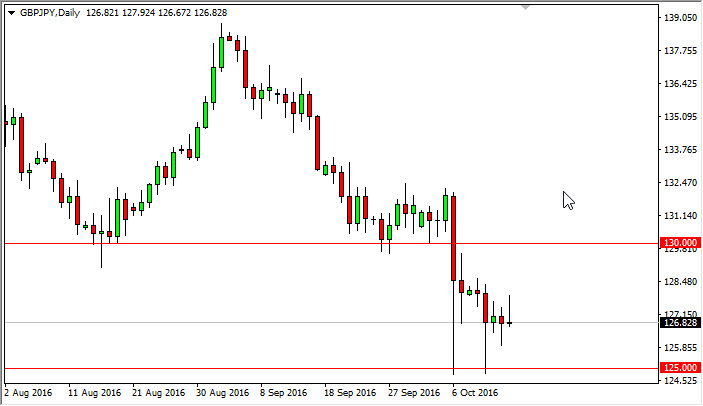 The GBP/JPY pair initially tried to rally during the day on Friday, but turn right back around to form a shooting star. The shooting star of course is a very negative sign, and as a result it looks as if we are going to continue to trade to grind lower. However, the 125 level below is massively supportive. It’s not until we break down there that we can make a longer-term sell position, but rallies at this point in time continue to offer short-term selling opportunities that I plan on taking advantage of. I have no interest whatsoever in buying this market at this point in time, because quite frankly the British pound continues to be punished for the exit vote that we got a while back. I think that the 130 level above is massively resistive, and as a result I think that any time we rally we have to start thinking about exhaustion. That exhaustion will offer nice selling opportunities so therefore we continue to sell every time the markets show signs of exhaustion in the form of shooting stars, bearish engulfing candles, and the like.

Once we get below the 125 level, the market should continue to drop down towards the 120 handle over the longer term. At this point in time, I believe that the Japanese yen could be slightly supported by the Bank of Japan, although its value against the British pound is probably the least of concerns by the central bankers in Tokyo. With this being the case, I think that this pair could be one of the softest yen related pairs, because of the exit vote.

If we did somehow get above the 130 handle, there is a lot of noise all the way to roughly 132.50 above. Any exhaustive candle in that area will more than likely attract sellers but if we do break above the aforementioned 132.50 level, the trend will probably change at that point in time. If that happens, the market could go much higher, perhaps reaching towards 139, and then perhaps even higher than that.