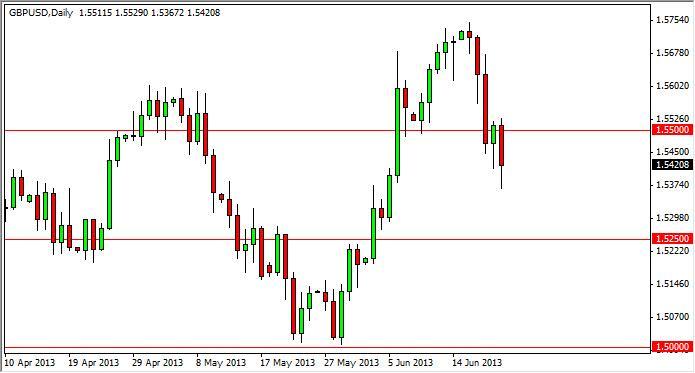 GBP/USD fell during the session on Tuesday as traders continue to sell risk in this treacherous environment. The British Pound is currently tied very closely to the Euro’s fate, as the UK exports over 30% of its goods to that region. The fall of the cable pair has been in line with the issues in Europe, and will continue to be so. The fall on Tuesday actually started on Monday as the S&P ratings agencies put incredible pressure on the policy makers in Europe to get a deal done on Friday in the form of some kind of step towards fiscal union.

The UK itself is struggling with some forms of austerity as well. This economy is moving along slowly, and the interest rate outlook for the UK is depressed going forward. The relative safety of the US dollar seems to be the driver of this pair over time.

Looking at the charts, we can see that the Monday session produced a shooting star towards the end of a down move that signaled the 1.57 as being resistive. The breaking below the lows from that session on Tuesday signals that more traders are willing to get short of this pair again, and the 1.55 level underneath looks to support the pair.

The 1.55 level is the beginning of the massive 200 pip thick zone that extends downs to 1.53. This zone is massively supportive, and will give the sellers a real fight. A breaking below the 1.53 level signals a massive break down in the support for this pair. With the trend being decidedly down, we are sellers of rallies in this pair, and would continue to do so until proven wrong by a new high above the 1.57 level. The selling of rallies has been effective since the start of November, and unless the global macroeconomic headwinds sudden disappear, could continue to be so. A break below the 1.53 level would have us massively short of this pair for a longer-term trade as it would then target 1.50 and below as the snowball effect would start.