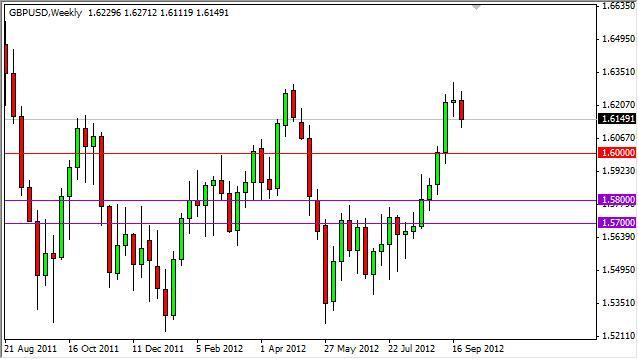 GBP/USD had a bearish week during the previous 5 sessions as the markets continue to punish the UK for its exposure to the European Union. The pair is a risk sensitive pair, and anytime there is massive concern in the markets this pair will often fall. The idea is that a lot of larger funds will buy US Treasuries as the asset is the closest thing to “safe” as people can get involved with.

The UK economy is going through massive austerity, and this will continue to create a drag on growth and the Pound as a result. The 1.55 level has held again, and the support zone down to the 1.53 level looks very much intact as well. The area simply will have to be broken through in order to see continued bearish momentum. The breaking of that level would be massive in its implications. The breaking of that area would also constitute a massive head and shoulders being broken down from, and this lead to a potential bottom at 1.41 or so.

On the upside, there is room to bounce up to the 1.57 without much in the way of massive resistance. However, the 1.57 level does look tough indeed, and we would expect sellers to step back into the market at that level and look to push the pair back down. The area has been massively resistive lately, and without some kind of major change in the European Union or the United Kingdom, it is hard to believe that the area will give way.

With all of this being said the cable pair might be a little hard to trade for the long term for a while, as there simply isn’t much room to move at the moment. However, keeping an eye out for the break below 1.53 or above 1.57 could lead to nice longer-term trades that could continue well into the new year. The pair looks like it is ready to sit fairly still until January when the volume will pick back up in the markets.