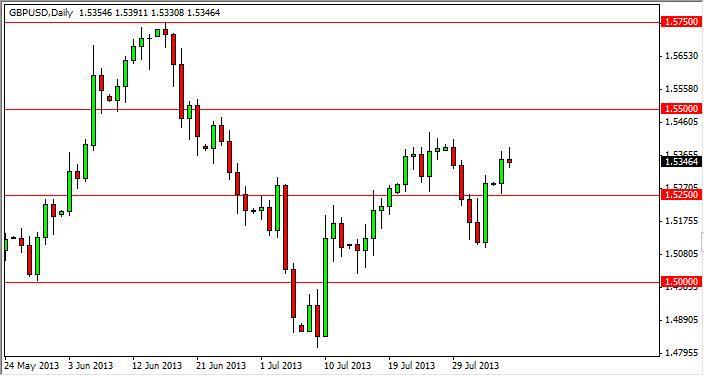 GBP/USD rose during the Tuesday session as traders sold off the US dollar in general. The pair is highly risk sensitive, and as the markets was in a good mood overall for the day – this pair got a bit of a boost.

The situation in Europe will continue to worry the markets, and that can be seen in the movements of this pair. The United Kingdom is highly exposed to the EU as it sends over 40% of its exports to Europe, and the fact that the EU is going into recession will not help the British sell their goods in that area at all. As the area struggles with its sovereign debt issues, there are very large British banks that are overly exposed to Europe. The crashing of these markets could damage the British banking system on a massive scale.

The pair has been forming a massive head and shoulders over the last several months, and the 1.53 level that we have been banging around lately is the neckline for the pattern. If we can break below it, the pattern would suggest that we are looking at a target of 1.40 before the move is over. Of course, we need to see the market close well below it on the daily chart in order to sell, but with the recent actions in this pair – we certainly cannot advocate buying it as the Dollar is most certainly king at the moment.

The buy side is almost non-existent in this pair. The 1.55 level above continues to play a part in the direction of this pair, and the action on Tuesday saw it fight off the bulls again. The area was once support, but now that it has given way, there are plenty of people willing to sell at that area. This leaves very little room for the market to move to the upside, and the methodical grinding lower in this market suggests that there is real strength building to the downside.

If we get the daily close below 1.53, we are willing to sell and hold on until we get roughly 12 or 13 handles in this pair. The candle shape for Tuesday is a shooting star at the bottom of a downtrend, and that will quite often signal an imminent breakdown.