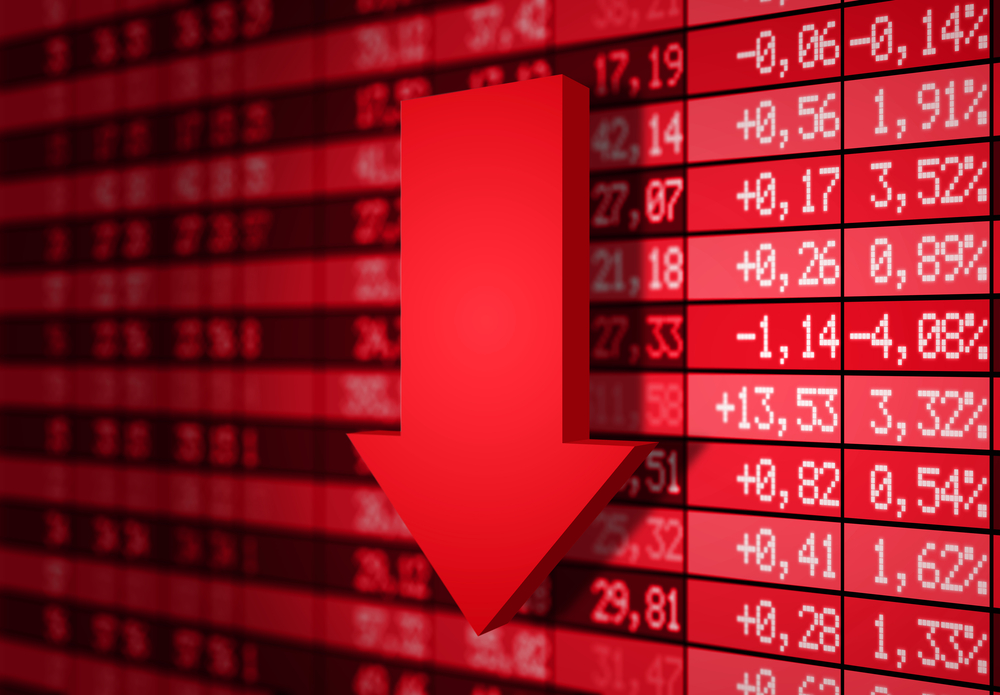 Global markets tanked as with the COVID 19 arriving on Europe’s doorstep; it has magnified investors’ attention to the single most significant global risk of the virus crisis, the fear of clustering cases outside of China.

Risk-off sentiment intensified Monday as the S&P500 is down around 2½% heading into the close with European equities falling almost 4% and smaller losses through Asia as Covid 19 mushrooms from an Asia centric concern to a global nightmare.

Oil is down more than 4%, and copper fell 1.5%. Even as the number of new cases in China is declining and the WHO indicates that the virus there has peaked, the market has reacted to growing evidence of spreading infections outside China: notably Italy, Iran, and Korea.

The risk-off tone overnight has seen the US2s10s curve at its flattest since October, and as the interest rate and growth, differentials continue to support capital flows into the US.

And absent a more dovish Fed, these tenacious structural trends are showing little signs of abating as global investors seek safe harbor under the umbrella of US bond yields, creating a supercharged USD dollar. However, its the dollar strength that the Fed might not be able -even if willing – to tolerate as the strong USD both tightens financial conditions and depress oil and commodity prices sufficiently enough for the Fed to miss their inflation targets. The irony here for gold investors is that a weaker dollar could lessen the chances of a Fed rate cut.

There has been very little data flow do divert attention away from the coronavirus. Still, Fed speak, both hawk and dove didn’t sound off any rate cut alarm bells as Cleveland Fed’s Loretta Mester (voter /hawk) and Minneapolis Fed’s Neel Kashkari (voter/dove) both advocated policy prudence.

The WHO director-general called the outbreaks “deeply concerning,” though he also noted that the WHO was “encouraged by the continued decline in cases in China.

Even as the market focusses on recent outbreaks outside China, Chinese activities are starting to recover.; if the Chinese labor force activities recover quickly, then PBoC stimulus effort will start paying dividends via ramped up domestic production.

Admittedly with many unknows surrounding the impact. But there are a few knows. China is coming back on the grid while governments and global central banks aren’t about to let this insidious virus snatch defeat from the jaws of victory.

With the virus arriving in Europe, it has magnified the oil market’s attention to the single most colossal risk of the virus crisis, the fear of a “super spreader” outside of China.

This appears to have materialized over the weekend, with a considerable number of cases reported in South Korea and Italy.

And using China as a template, the most immediate economic impact is likely to be aggressive containment measures and travel bans. So similarly, to the primary containment measures in China, traders went into sell first ask questions later mode for fear of more evidence that the outbreak is spreading in Europe or even to the United States.

From a technical perspective, the so-called OPEC+ straddle implied price bottom between $50-50.25 is holding as the thought of a move below $50 makes a more massive OPEC + production cut response more likely.

WTI continues to respect his level, but with thoughts of “disease X “keeping investors awake at night, China teapot refinery activities need to come roaring back with a vengeance.

And with China workers appearing abler and willing to come back online, it could go a long way to stabilizing regional risk sentiment.

On the back of a colossal position build over the past week, gold investors found themselves a bit too far over their skies and absent a decisive shift in Fed speak, the markets insatiable demand for gold has temporarily abated as profit-taking has set in.

From a technical perspective after yesterday’s launchpad on the back of a massive parabolic rally, the failure to break $ 1700 was a touch disappointing and likely caused some technical unwinds.

However, the afternoon gold liquidation could be related to equity margin calls rather than any underlying market weakness, given the overtly risk-off tone dominating the markets The steep declines in stocks may have triggered the need to meet margin requirements by some investors and necessitate the sale of liquid assets such as gold. So, if this is indeed the case once these margin obligations are covered, gold could rebound a touch.

But with a possible recentring of risk on a more favorable Asia centric theme, the slower rate of infection in China has eased demand for hedges, so gold price action may not be as robust today.

The turning point for the Asia FX remains less clear as global risk aversion comes to the fore as Covid19 cases are getting reported abroad, redoubling the global fear factor.

In this environment, foreign investors have gone cold on riskier assets in favor of the umbrella of US treasuries, which is creating USD demand as investors favor the USD over more China sensitivity Asia currency growth proxies.

Until we see a significant increase in people going back to work in China and the PBoC stimulus paying dividends via ramped up domestic production, Asia FX could languish.

Political uncertainty on the back of PM Mahathir resignation and as the power struggle intensifies leaves the government in a state of gridlock at a time when policy inputs are most needed to ward off the economic tumult from a protracted USD-China trade war and the double whammy effect from the coronavirus.

FX markets look to be moving from “Asia is the epicenter of COVID” and with the lights starting to flicker across China’s industrial heartland decent support is beginning to build around AUDUS .6600 as Asia key currency barometer the Yuan remains on an even keel on anticipation of the ramp-up in production

Better PMIs out of Europe at the end of last week helped to put a stop to the EUR’s slide, though in an environment where the USD still looks to be the safe haven of choice, it may be hard for the EUR to recoup too much ground. Germany’s IFO index saw both current conditions and business expectations improve slightly in February, despite market expectations of a modest decline.

With the coronavirus spreading in Europe, immediate EURUSD weakness may not be a foregone conclusion on the back of the virus crisis. The primary driver of recent euro weakness has been carry trade-related funding. If the virus were to spread across Europe, the negative growth impact could be offset by an unwind of carry trades amidst risk-aversion. What’s more, a severe economic impact is likely to see a more significant monetary policy response from the Fed rather than the ECB given available monetary policy space.

The European outbreak of the virus should make the Swiss franc an even more popular safe haven. It is the only European currency with a negative beta to growth. As the SNB appears resigned to staying on the sidelines, funding carry trades in francs has been far less prevalent than in euros or yen.

An epic debate is raging behind the scenes over whether or not we are witnessing a regime shift USDJPY. Is it or isn’t it losing its safe-haven status? But overnight, the JPY was clearly a safe-haven bet as the focus has shifted from China to Europe. JPY loses its haven appeal when the exogenic shock comes from China but not from global risk aversion.

With virus fear spreading in Europe, the JPY should, in theory, also benefit from the squeeze on its funding shorts.