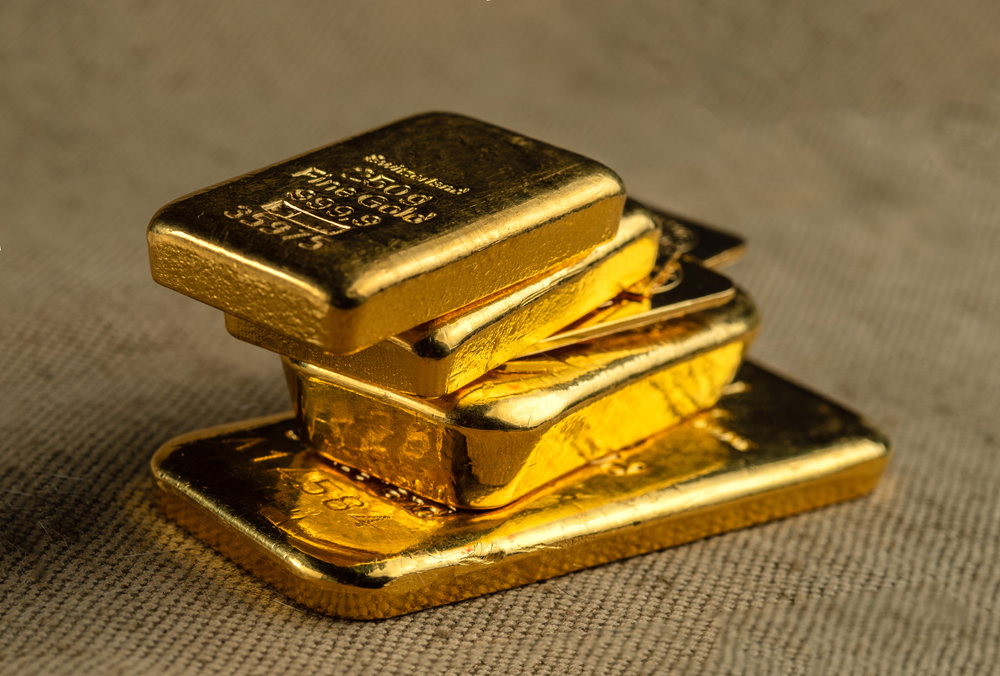 Welcome to next year: ’tis here.

“I gave you every break possible. You had a chance. You weren’t even close.”

Accordingly, per this missive’s title and its opening Gold Scoreboard, we’re going with 2254 as Gold’s high for 2022. How did we arrive at that price? You website followers out there may be familiar with our Market Ranges page, which each day updates our EDTR (“expected daily trading range”) for the following trading day. At times, too, we’ve assessed same for weekly and month measures.

2254 is borne of the yearly measure on a percentage basis: Gold’s EYTR for 2022 is 30.4%, (which for you WestPalmBeachers down there means the expected distance from Gold’s 2022 low to its high). A derivative of the EYTR is the realistic assumption that Gold shan’t simply go straight up (which if it did would bring us 2387 this year). Rather, should Gold put in an up year for 2022, 23.2% (the expected maximum percentage up move from 1831 with the overall 30.4% trading range) puts the projected high at 2254.

Thus in the following graphic, here is where 2254 appears above (still way above) Gold’s weekly bars and parabolic trends from a year ago-to-date. 2021 was a year wherein Gold couldn’t find its way out of a paper bag despite Debased currency wreckage, Treasury insolvency to meet Debt service, and non-covered Derivatives run amok. The 3Ds in a rotted nutshell, right there … Yuck! 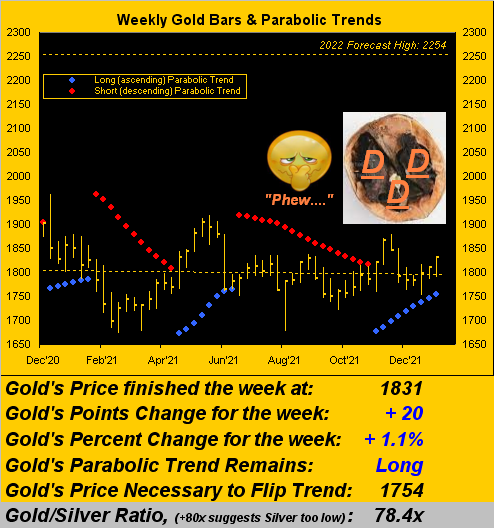 But what shall it take to wrest Gold out of its high-1700s to low-1800s malaise? Yes, obviously Gold’s foundational fundamentals support price above 4000 right now, a valuation even deemed modest by some hardcore analysts; (we just do the honest Debasement math). Not helping is the metastasizing notion of “Manipulation” put upon price by entities with sufficiently margined futures accounts to measuredly repel upside movement time and again.

‘Course a sovereign bank can give “them of the M” a run for their money; add to that the buying participation of large institutional funds and Gold can be off to races really fast. Rather than Gold getting a lurch by some geopolitical event (following which price always sags back from whence it came), large scale buyers shall ultimately put price right — and right quick at that — upon real erosion of currency-based wealth. And were that to occur this year, our 2254 can well appear as a modest speck in the rear-view mirror. Stay tuned…

Meanwhile comes our high-level mix of precious metals-based equities. By their percentage tracks starting from this time a year ago, the mild-standout is Franco-Nevada (FNV) +10% along with also-positive Newmont (NEM) +4%. But then ’tis nothing but red with Gold itself -4%, the VanEck Vectors Gold Miners exchange-traded fund (GDX) -11%, the Global X Silver Miners exchange-traded fund (SIL) -20%, Agnico Eagle Mines (AEM) -25%, and from worst-to-first-and-back-to-worst Pan American Silver (PAAS) -28%. ‘Course from the “Eternal Hope Dept.”

We reprise a savvy trader’s quip from decades ago: “Ya can’t sell ’em on the way up if ya didn’t buy ’em on the way down!” And featuring Stoopid and Smart, this display definitely depicts “down”: 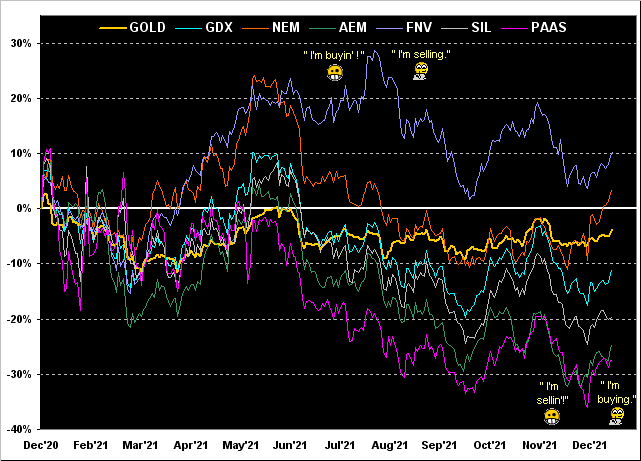 For the BEGOS Markets as a whole in 2021, the economically-driven components skīed whilst the safe-havens died. Per our final percentage standings for 2021, Oil led from the get-go and never looked back, the +55.8% gain its largest since 2007. The ever-earnings-ignorant S&P 500 scored a podium finish, as did Copper. Then at the dividing line appropriately is the Dollar with the +6.4% gain seemingly impossible given its massive Debasement: that’s called “market dislocation on steroids”. Finally in the red are the safe havens after two fairly solid prior years:

Now for the past year’s full look at the Economic Barometer: when you go from “no economy” (2020) to “full economy” (2021), you look really good. However, recall our emphasizing through 2020 that the private sector naturally negotiated Covid’s swerving curves: folks found their way through the friction-filled fray. But at the end of the day, 2021 finished with the Baro at a better than three-year oscillative high, the S&P itself making an all-time high at 4809 on 30 December. Lookin’ great there, Joey Baby!

Still, from the “Cooler Heads Prevail Dept.” Bill Stromberg (T. Rowe Price Prez/CEO) pointed to investors being in “free-form risk-taking”, the FinTimes going on to further note that “investors can be right for the wrong reasons.” That’s responsible reporting, the antithesis of which came from Dow Jones Newswires referring to corporate profits for the past two years as “Rip-roaring”. Really? Query: If “Rip-roaring”, how then can one account for our “live” reading of the S&P 500’s price/earnings ratio having climbed from 39.0x at the end of 2019 two years hence to now 49.5x?

“Because of the commensurate rise in stock prices, mmb. Happy New Year, by the way.”

To you as well, faithful Squire. And your having demonstrated four-syllable wording in commencing the new year is impressive. ‘Course, ’tis way beyond “commensurate”; we see it as “catastrophic” … rip-roaringly so when it doth go.

As to the now, what is on the upside “Go!” is the linear regression trend of every BEGOS Market save for the Bond. Here are the last 21-days (one month) for each of them as we go ’round the horn, money pouring into “everything” except debt, (poor TreaSec Yellen). The baby blue dots depict the day-to-day consistency of the grey trendlines: 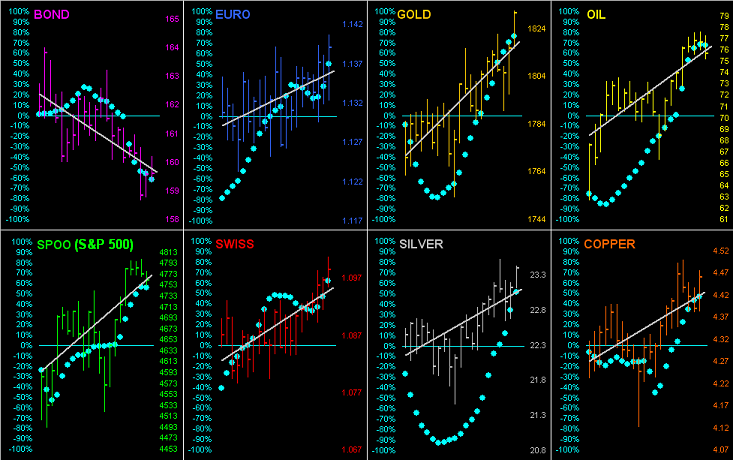 Next we’ve the 10-day Market Profiles for Gold on the left and Silver on the right. Simply stated, life again at the top looks good, and more so given price being so materially undervalued. Today at 1831, Gold is priced at just 45% of its Debasement valuation of 4070. The Gold/Silver ratio is today 78.4x, but the average from 2001-to-date is 66.5x. Thus doing the simple arithmetic: were Gold today actually at its proper valuation of 4070 and the G/S ratio at its average of 66.5x, the price of Silver (today 23.36) would be 162% higher at 61.20! 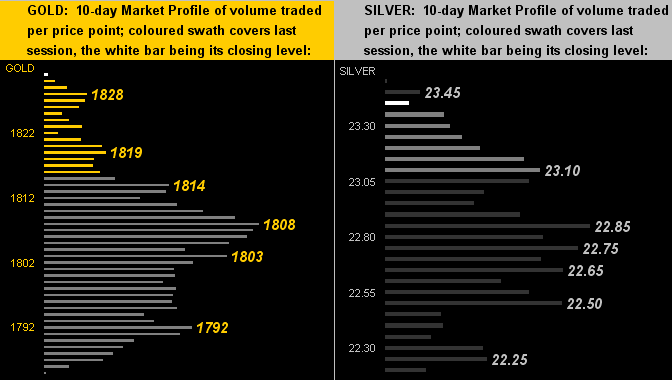 And it being month-end, moreover year-end, here is the Gold Structure monthly bars graphic across the past 11 years, our 2022 forecast high of 2254 ratcheted down from last year’s 2401 target as the battle across The Northern Front for the Final Frontier furiously continues, purportedly against the forces of “The M Word” crowd: 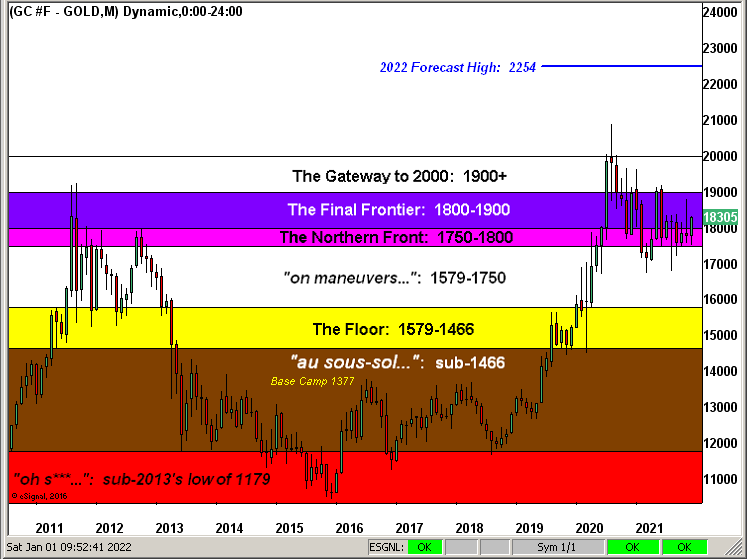 Now as a closing bonus, here we’ve the annual closing price of Gold across the past 51 years, from 35 then to 1831 today, (thank you, Dick): 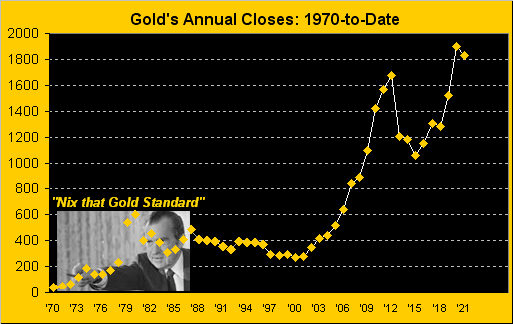 2021 is done with 2022 right on cue. We expect volatility to remain rather rampant throughout the year across the BEGOS Markets. Therein, clearly the S&P 500 is beyond due for another major wallop similar to those during 2001-2002 and 2008-2009 for the most basic of reasons: the money isn’t there. Indeed to update a favoured stat from 2021: at yesterday’s close, the market capitalization of the S&P 500 alone is $42.0 trillion; the StateSide liquid money supply (M2) is “only” $21.8 trillion; (globally ’tis rounded at $40 trillion).