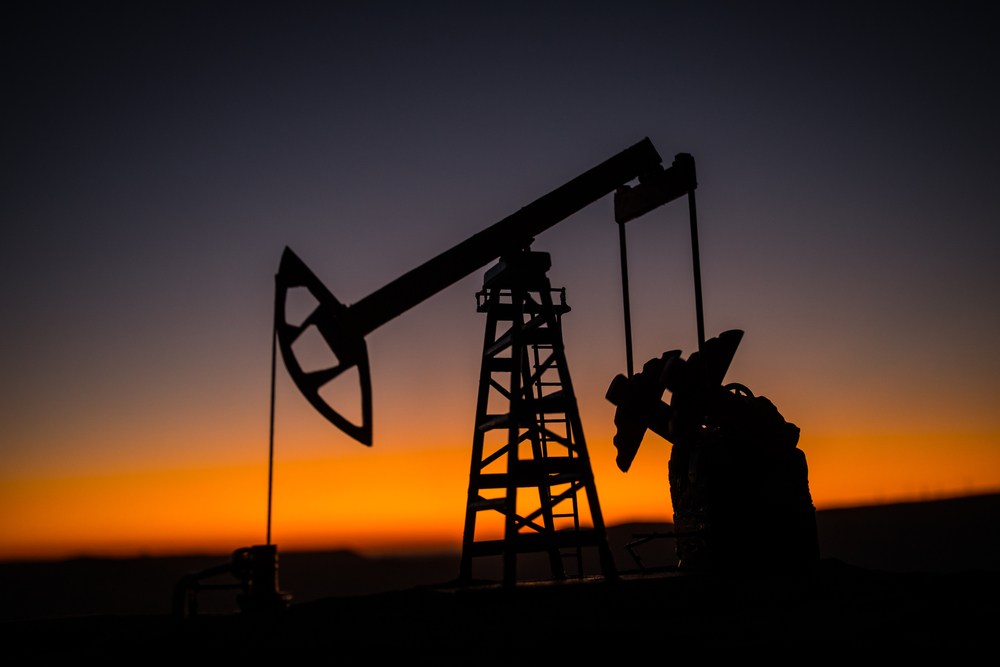 As a result the dollar strengthened, yields dropped while commodities traded lower, led by losses in energy and industrial metals while gold and most agriculture commodities saw net buying.

The summary below highlights futures positions and changes made by hedge funds across commodities, forex and financials up until last Tuesday, August 17. A week where continued focus on the risk of an earlier than expected unwinding of the Fed’s massive stimulus program, helped support a renewed growth to value rotations in stocks, a stronger dollar and somewhat surprising, lower bond yields.

The latter potentially driven by emerging risk adversity caused by the continued spreading of the delta coronavirus variant as well as weaker input cost through lower commodity prices.

A relative small decline in the Bloomberg Commodity index driven by another decline in both energy and industrial was partly offset by continued buying of grains and softs, as well as renewed demand for gold.

The Bloomberg Spot index traded lower in the week to August 17, albeit only by 0.4% with losses in energy and industrial metals being partly off-set by strength across the agriculture sector and renewed buying of gold. The rotation resulted in the combined long across 24 major commodity futures holding unchanged at 2.2 million lots with the biggest reductions hitting Brent crude oil, natural gas and copper while strong demand was seen in gold, corn and cocoa.

In response to continued Covid-19 demand worries, speculators cut their combined crude oil long in WTI and Brent by a total of 31.2k to 534k, a nine-month low. All energy contracts including natural gas saw net-selling.

Crude oil (OILUSOCT21 & OILUKOCT21)as well as most other commodities has started the week with gains in response to improved risk appetite, not least supported by a softer dollar. Last week’s slump, the worst in three years for oil, was driven by the delta variant, Chinese growth worries, and the prospect of reduced Federal Reserve stimulus.

While the virus remains a threat to the short-term demand outlook, despite signs of an improving situation in China, this week’s Jackson Hole summit may give the market some ideas about the timing of tapering (see below). Double bottoms have emerged in Brent at $64.50 and WTI at $62 while speculators cut bullish oil bets to a 9-month low in week to August 17. 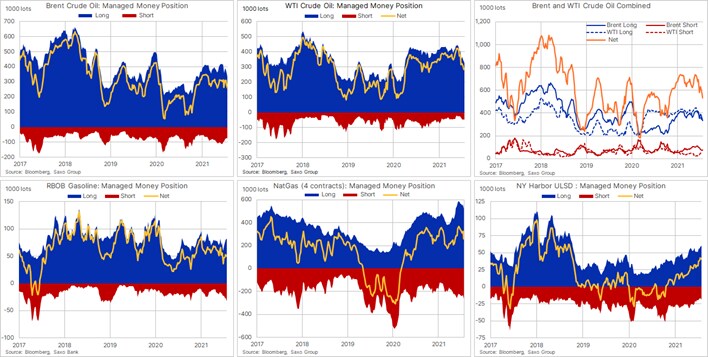 The strong recovery that followed the August 9 flash crash helped drive a 52% increase in the speculative gold long to 77.6k lots while silver, troubled by its link to falling industrial metals, saw its net length slump to a 26-month low at just 9.7k lots. Copper’s worst slump in two months helped drive a second week of selling which saw the net long down 38% on the week to 20k lots. Platinum which recently had seen its discount to gold hit $800 from less than $500 last month saw a small amount of buying after speculators recently build the biggest net short in two years.

Gold has started the week relatively good shape after managing to shrug off last weeks dollar strength and renewed pick up in real yields. It however remains below the psychological important $1800 level, as the market adopts a wait-and-see approach as investors await Jackson Hole later this week for more insight into the Federal Reserve’s policy outlook. Silver (XAGUSD) has clawed back some of last weeks losses with the XAUXAG trading at 76.80 after hitting 77.75 a couple of trading sessions ago.

HG Copper (COPPERDEC21) continues to recover following last week’s slump on supportive signs from China where stock levels have fallen and local premiums above LME spot has risen in response to the government’s efforts to combat the recent virus outbreak. Also, the risk of strike related disruptions in Chile remains with a slew of mines undergoing contract renewal talks, with unions at two mines currently out on strike.

The sharp recovery from below $4/lb, now a double bottom,together with the long-term supportive outlook for copper has helped attract fresh buying and short covering. First level of resistance at $4.215 followed by $4.295. 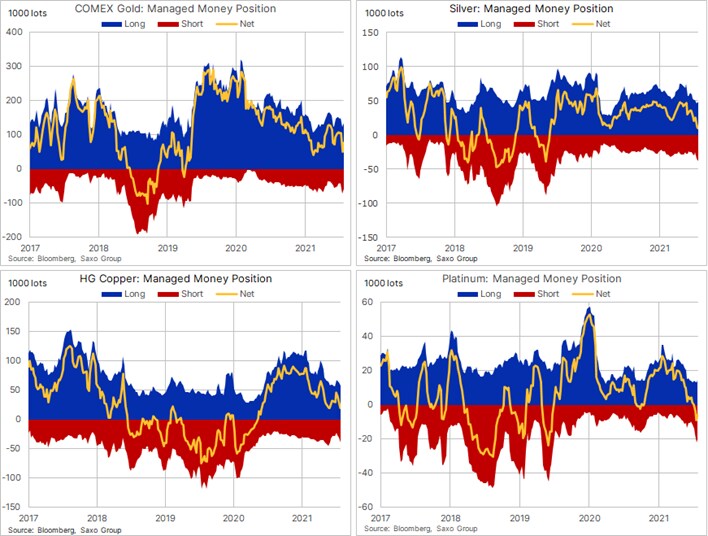 Across-the-board buying of key crops helped lift the grains sector long by 45k lots to a ten-week high at 544k lots. The biggest exposure remains by far in corn followed by soybeans and increasingly now also wheat, with both Kansas and Chicago traded wheat seeing raised demand during the past few weeks. In softs, all contracts saw net buying led by sugar with the net long reaching a five-year high, and cotton which reached a three-year high at 82k lots. Cocoa flipped back to net long while coffee was bought despite trading lower on the week.

Speculators almost cut their recently established dollar in half during the week to August 17. The selling, however, was concentrated against the euro where an initial rejection at €1.17 and subsequent bounce to €1.18 helped drive a 70% increase ($3.5 billion equivalent) in the EUR net long to a five-week high at 57.6k lots. Longs that immediately got challenged by the renewed euro weakness towards the end of last week when general risk adversity helped strengthen the dollar back below €1.17.

With most of the other major currencies led by CHF, JPY and CAD seeing continued selling, the overall reduction in the net dollar long against ten IMM currency futures and the Dollar index was cut by $2.3 billion to $2.6 billion. 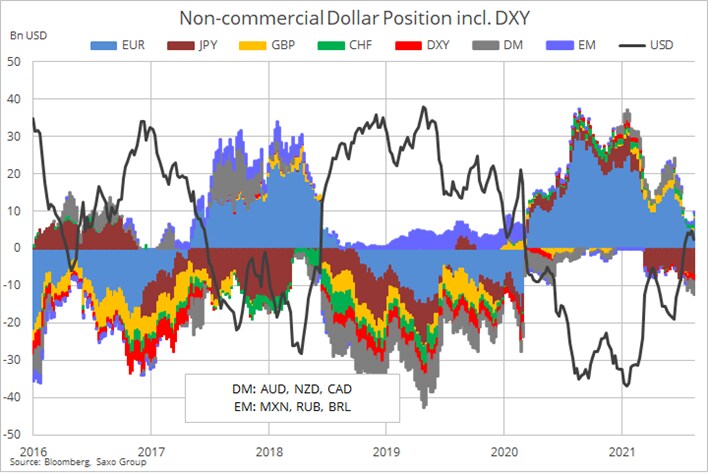