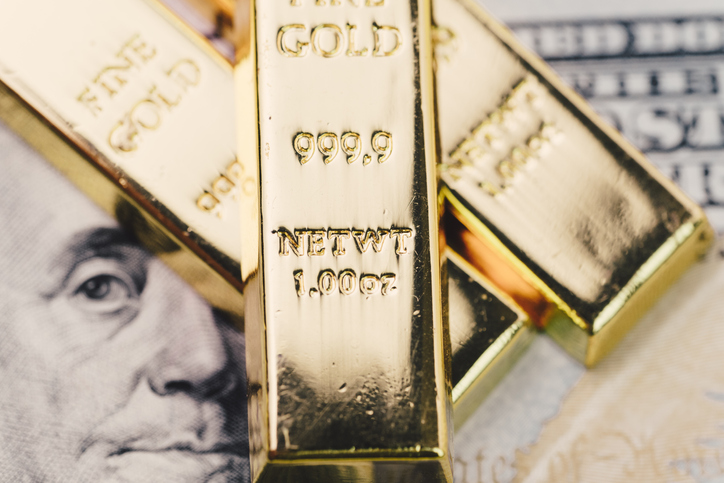 Having settled the week exceedingly down 6.2% at 1764, Gold is now priced by the market at but 46% of its currency debasement value (as measured by the StateSide “M2” money supply) of 3870, even as adjusted for the increase in the supply of Gold (which today is 201,480 tonnes). Neither is Gold a discarded relic, nor shall it ever be supplanted by cryptocrap. Gold remains humankind’s sole de facto true currency as so shall it be even after we’re not around anymore.

Its Index (by descending weight = the €uro, ¥en, Sterling, CanDollar, SweKrona and SwissFranc) gained 2.0% for the week, which of the 1,068 weeks millennium-to-date ranks 44th best (in the 96th percentile). Contextually, ’twas the Dollar’s firmest up stint since a series of weeks during the March 2020 depths of COVID, prior to which was the +2.3% week ending 14 November 2016. But as a valued member of our Investors Roundtable would say: “For the moment, the Dollar is leading the Ugly Dog Contest.” Shan’t last; it never does.

Long-time readers of The Gold Update know that Gold provenly plays no currency favourites. As herein referred to a week ago, in 2014 on 04 September, Gold year-to-date was +4.7% and the Dollar +4.4% … “How can that be?” … Just because Gold tends to be priced in Dollars doesn’t mean squat as to how the Doggie Dollar itself is priced. Cue Fleetwood Mac from back in ’77: “You can go your own way…”And clearly for Gold, ’tis a long way up to go, the Dollar be damned.

The mighty S&P 500 just lost 2.1% of its value in four days. Millennium-to-date that at best ranks as “noise”; ’tis not even in the bottom 10th percentile of four-day price changes. The “live” price/earnings ratio is at this writing an outrageously ghastly 53.5x, the yield a puny 1.359%, and the risk of ownership 100%. As we penned to our Investors Roundtable on Thursday: “My stock market fear has morphed into sheer terror. I used to take The Rud’s “50% correction” with a grain of salt. That now actually may be modest. ‘Tis merely about “The When”.” The stock market remains a losing game, (which is why most people on Wall $treet never make any real money).

Here’s a simple equation: Late Fed + Dopey Media = Comprehensive Misconception. A time-honoured truth specific to the Federal Reverse is that ’tis “always behind the curve”. However, we wonder if this time the Fed in negotiating the curve has instead gone beyond the edge of adhesion and off the cliff. This past Wednesday, the Federal Open Market Committee unanimously voted to neither taper asset purchases, let alone raise its Bank’s rate, toward maintaining the ongoing 0.00%-0.25% FedFunds target range.

But more incredulously (this from the “Defying Common Sense Dept.”) the FOMC “penciled in” to raise interest rates by late 2023, (ahead of that initially considered). Accordingly, the fawning FinMedia — specifically the FinTimes — printed: “The Fed nailed it.” Nailed what? That they see two FedFunds rate increases the by end of 2023? How about by the end of this year? The Fed hasn’t nailed anything: rather, in ducking reality, ’tis The Fed that stands to get nailed. Are their two portended rate increases going to thus be 10% apiece? Just to catch up to inflation (er, uh, stagflation), you understand; (see 1976-1980). Honest to Pete and back again: if one still is in stocks and not in Gold, there’s not much more we can do. Facts indeed.

As for you valued readers who understand and take the Gold Story seriously, the following view of the weekly bars from a year ago-to-date at present doesn’t look that great. Or does it actually a buying opportunity make? Recall the late great Richard Russell: “There’s never a bad time to buy Gold”: 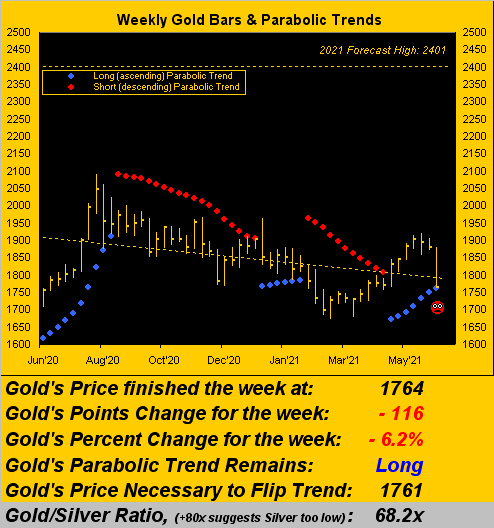 Rather, let’s go have a look at the Economic Barometer. It does have the beginning of that good-for-Gold “Game Over” look:

We read this past week that non-financial aggregate StateSide debt is now nearly one-half the size of the U.S. economy. (Again, let’s not even go there…) And as to our ongoing notion that the post-COVID economic boom “has already happened” as folks abandon COVID-time activities and replace them with those more apropos of “normal” times, spending data now indicates that large item purchases are “out” … and that eating out is now “in”.

To be sure, whilst May’s Housing Starts, Industrial Production and Capital Utilization all improved, Building Permits slowed as did Retail Sales. And for June, the New York Empire State Index, Philly Fed Index, and National Association of Homebuilders Index all fell short of their May readings. Up with inflation, down with the Economic Barometer/S&P 500, and hello stagflation. (“Tick…tick…tick…”)

Meanwhile, on this side of the pond, ’tis said so much COVID-debt was taken on by companies, that “life-support lending” is in vogue toward combating insolvencies. This has of course (and notably post-Fed) knocked the €uro from the podium in the ongoing Ugly Dog Contest, the Zone’s currency taking its biggest three-week tumble since COVID really kicked in during April a year ago. (And for those of you scoring at home with that European vacation in mind, the €uro’s present 1.189 level looks to erode by our purview to 1.173, even to 1.161). “C’mon Mabel, we’re goin’ to Rome!”

Now two weeks back when we could “see” some Gold setback — even just seasonally let alone technically — we perhaps ought have entitled that piece (instead of “Gold’s June Swoon”) rather as “Gold’s June Doom”. Indeed since Gold’s recent 1913 high on 26 May, price today is -7.8%, about its net change year-to-date (-7.2%). And per the following graphic on the left, upon Gold’s “Baby Blues” cracking the +80% ice back on 07 June, ’twas surely the real commencement of this swoon.

Note that on the right in Gold’s Profile for the last fortnight there’s been scant trading volume through much of the mid-to-lower 1800s, which for the “All gaps get filled” fans is encouraging for Gold to rebound, (and which common sense of course says ’twill): 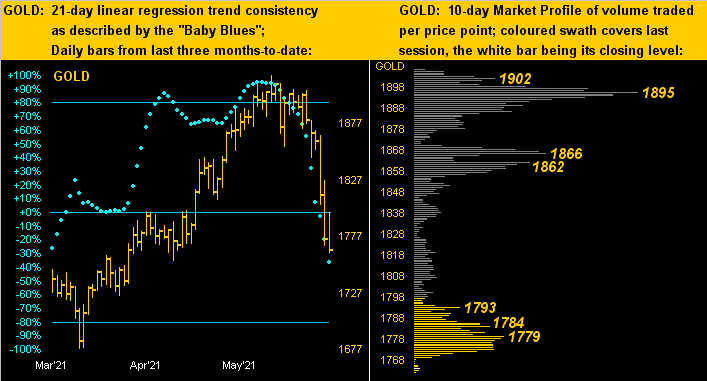 Silver’s like +80% ice broke even sooner, back on 25 May as we seen below left. Should she not hold price here, her next structural support area is a full Dollar’s range from 25.68 down to 24.68. Sister Silver’s Profile below right matches sufficiently well with that for Gold, the Gold/Silver ratio now 68.2x running just a tad above the millennium-to-date average of 66.3x: 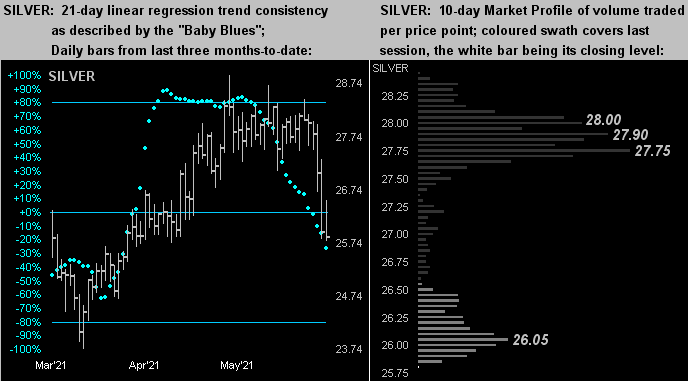 Whew! After a week like that (our outlook/review thereto), we can only finish up with something even more cuckoo. In her testimony this past week before the Senate Finance Committee, former Fed Chair Janet “Old Yeller” Yellen in sellin’ the Biden Administration’s $6 trillion budget presented it as a step to resolving “climate change” and “inequality”. We can’t wait: all of us equally poor under clear skies. “Got Gold???”