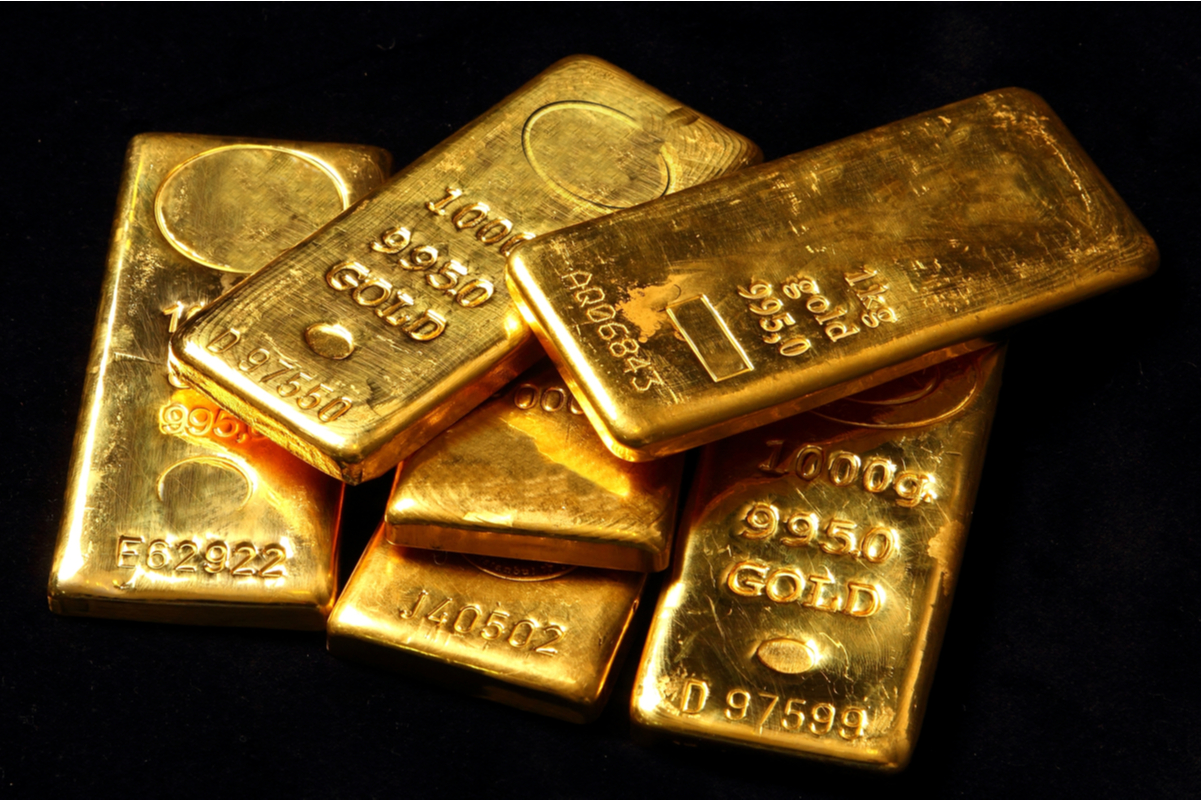 Ladies and gentlemen, please welcome the final quarter of the year! What were the first nine months of 2022 for the gold market? Well, in Q1 there was an impressive rally in gold, with the yellow metal staying above $2,000 for a while. However, the next few months brought a gradual decline in gold prices. After several weeks of being traded between $1,700 and $1,800 during the summer, in September, gold gave up and slid below $1,700, as the chart below shows. 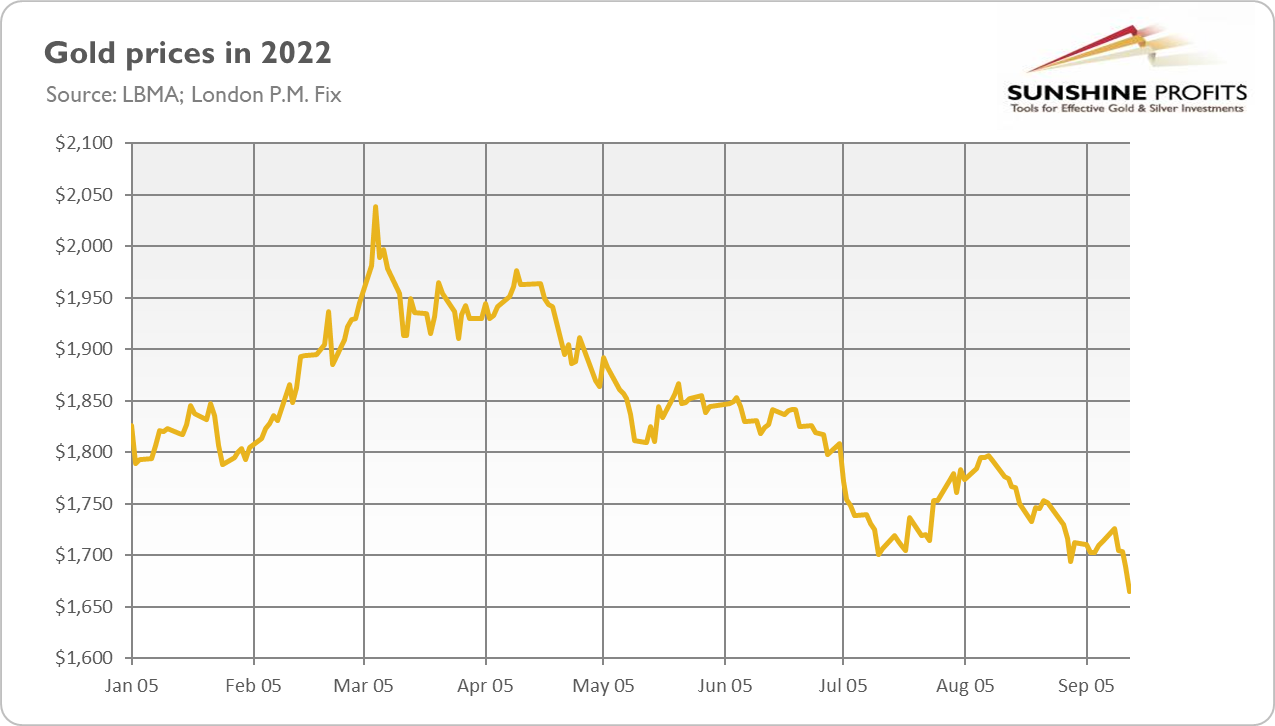 The reason behind this bearish trend in gold is clear, and its name is the Fed, the hawkish Fed. The tightening of monetary policy by the U.S. central bank boosted the greenback, gold’s nemesis, and bond yields (see the chart below). The higher the interest rates, the less attractive gold is compared to interest-bearing assets. Unfortunately for gold, inflation stabilized somewhat, which – with the hikes in the federal funds rate – lead to the rise in the real interest rates that are key for the gold market. 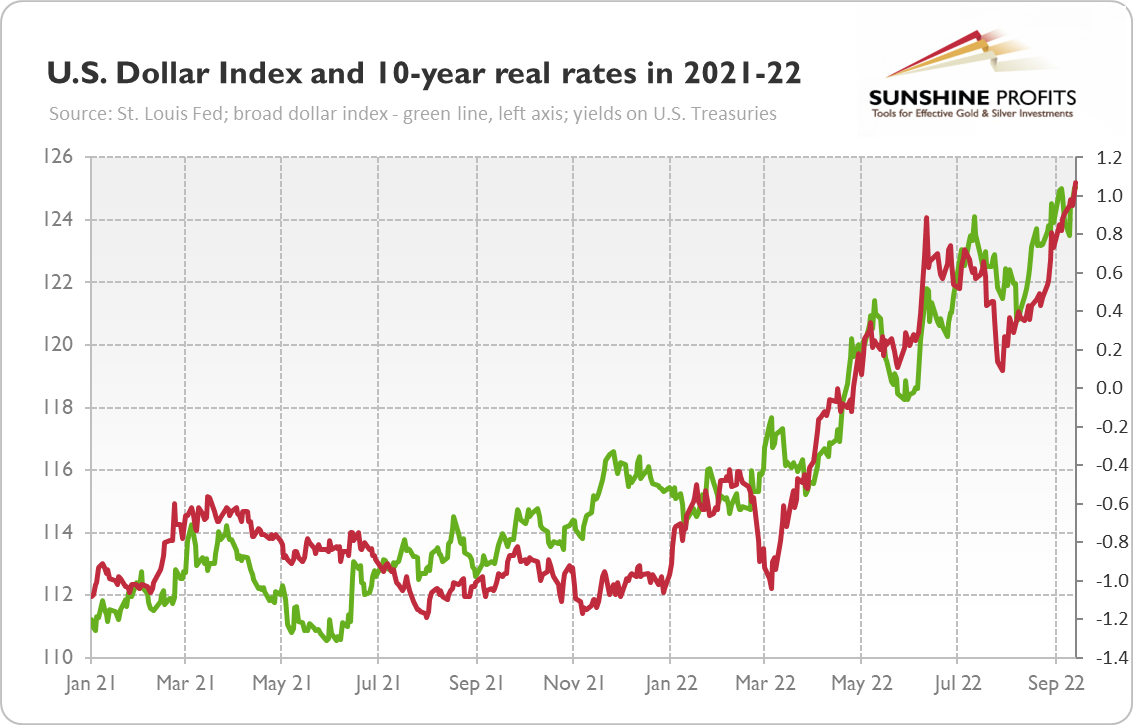 What’s Next for Gold?

We know what happened, but the key question is what awaits us in the last months of the year. Well, I don’t have a crystal ball, but obviously gold could struggle more during this tightening cycle of U.S. monetary policy. Interest rates are set to continue higher until inflation retreats closer to the 2-percent target. The Fed could go all the way to 4.5%. The more hawkish the Fed and the steeper the expected path of the federal funds rate, the worse for gold.

However, everything passes away, and this applies also to gold’s disappointing performance (although please note that gold is still one of the best assets this year – just think about declines in equities – and gold fares much better in other currencies than the U.S. dollar). At some point, either inflation softens or a recession arrives. In August, Bloomberg’s US recession probability forecast increased from 40% to 50%, and according to the World Bank, “as central banks across the world simultaneously hike interest rates in response to inflation, the world may be edging toward a global recession in 2023.”

Then, the Fed will likely reverse its course, and gold could rally again, especially if the economic downturn is accompanied by still high inflation. Gold has historically performed relatively well during stagflations and recessions (according to the World Gold Council, “gold’s median return during such periods has been 0.92%, higher than comparable major asset classes with the exception of US Treasuries and corporate bonds”).

What could also help gold a bit is the Ukrainian counteroffensive (it increases the odds of a resolution and a lack of the energy crisis in Europe during winter) and the continuation of the tightening cycle started recently by the ECB (it could reduce the divergence between interest rates across the pond).

Of course, waiting for the Fed’s pivot could be similar to waiting for Godot. In Beckett’s play, Godot never arrives, but we know that at some point, the Fed will at least stop raising interest rates. We just don’t know exactly when this will happen. However, it’s possible that we are already behind the peak of the Fed’s hawkishness and that the upcoming hikes will be smaller compared to those from September and previous months.

I also believe that the biggest increases in real interest rates and the U.S. dollar index have already been made. The full reversal in the Fed’s stance would be much better for gold, but such a moderation should be welcomed as well.

Hence, gold could find a bottom in the final quarter of 2022, although it could struggle until Q1 2023. Why? Well, inflation probably won’t moderate this year, and I expect more economic weakness that would finally force the Fed to make a policy shift.