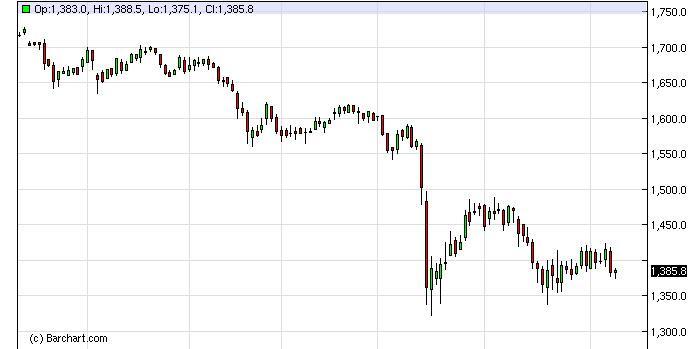 Gold market rose during the session on Wednesday as the concerns in Europe continue. The world is now trying to factor into the picture that the Europeans may be ready to drag out the Greek situation even longer. It was announced that the EU may or may not decide to fund Greece in the near-term as the Greeks still haven’t come to an agreeable set of terms with the “Troika”. The news hit the wires that the decision wouldn’t be done during the Wednesday session as expected, and the news had people buying anything that was safety related.

The gold markets still managed to hold up fairly well, even though the Dollar took off against many other currencies. Gold in Euro terms had a bit of a spike for the session, and this shows that overall the demand for gold is still strong.

The market looks fairly strong at this point, and we are impressed by the $1,700 level as it has been so supportive lately. The level at $1,750 is still looking rather resistive at this point, but the overall uptrend should continue as the demand has been so strong. The level will more than likely give way in the relatively near term, but until then – we may see serious consolidation and choppiness in the interim.

The $1,500 level is the ultimate floor in this market for us. If we were to fall that far – we feel that the market will turn into something to sell. In the mean time, we only buy gold, but recognize the fact that the market could pullback significantly if there is some kind of run to the US dollar. However, this should only be a temporary thing, and the gold markets will fall quickly – only to attract value investors. The market should continue to climb overall for the year, so we are constantly trying to find supportive levels to looks for supportive candles. Currently we see them at $1,700 and $1,650 as these two both look like they have the potential to attract buyers in this obviously bullish market.