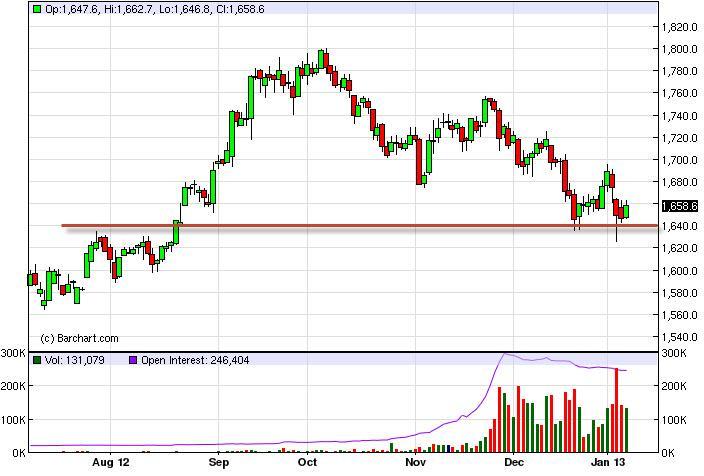 Gold skyrocketed during the Wednesday session after first falling. The market retested the important $1,650 level and shot up from it. Hopefully, you watched the video yesterday and took advantage of this level from which to buy. From that point, gold has risen over $68 an ounce at the time of this writing.

The Federal Reserve has let it be known that the interest rates will be just as low as they are now until at least the end of 2014. This is very negative to the Dollar, and as a result the price of commodities will gain. Gold is a great protector of wealth when the value of currency falls. The central banks around the world are starting to warm up the printing presses for their currencies, and as a result the gold trade will again be the center of attention.

The pair has not only proven the supportive nature of the $1,650 level, but it also managed to smash through the $1,700 level without any struggle at all. This was the first hurdle we saw for the gold markets, and it has obviously given way quite easily. Because of this, we have to look forward from here now.

The $1,700 level should be supportive, and the next cluster that the gold markets will aim for should be the $1,750 level. The area has been resistive as well as supportive several times since the end of summer 2011, and if history is any indication – it should be again going forward. The gold markets are notorious for being overly technical, and this chart clearly has a “$50 bias” when it comes to support or resistance. Because of that, the market can be thought of as a series of fights to see if we rise or fall $50.

The market certainly is a screaming buy at this point, and we are willing to buy more on pullbacks on the short-term charts. The market will continue to be strong as long as we are above the $1,700 level. With this in mind, we are not willing to sell at this point.