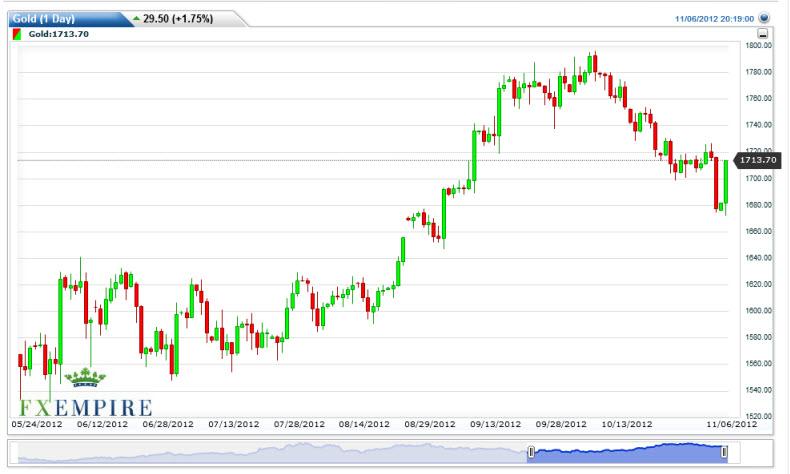 The gold markets skyrocketed during the session on Tuesday as the United States started to try and elect the next US President. With this being a presidential election, there are a lot of things up for grabs and the gold market will certainly be a great place to see how the world reacts to the elections.

Simply put, it appears that the market believes that president Obama could be reelected. This would be reflected by higher gold prices as the US dollar weakens. This is because of the spending that the Obama presidency has done over the last four years. Compounding this is the Federal Reserve and its incredible amount of spending. If Gov. Romney wins the election, this would actually be a complete reversal of this sentiment.

As the United States weakens its currency by spending, gold should rise. We still believe in the long term viability of buying gold, as there are plenty of central banks around the world that are both buying it, and printing paper currency. However, the election results will greatly affect the short-term movement of this market. It is because of this that we are very cautious in trading at this point time.

The $1725 level represents significant resistance, and if we get over that the gold market should continue much higher. However, we think a pullback will simply offer buying opportunity in the long run, and we will not sell gold. In fact, we are more than willing to let it fall precipitously in order to get a nice cheap price on one of the most bullish markets out there.

We don’t see a significant downturn in this market until we get below the $1500 level. Looking at this chart, we think that the $1500 level will be very difficult to flow through to the downside, and as a result, we think it is only a matter of time before we start buying gold hand over fist in the futures market. We already own physical gold, and the ETF known as GLD for a core position. Going forward at this point, we only see bullishness going forward.