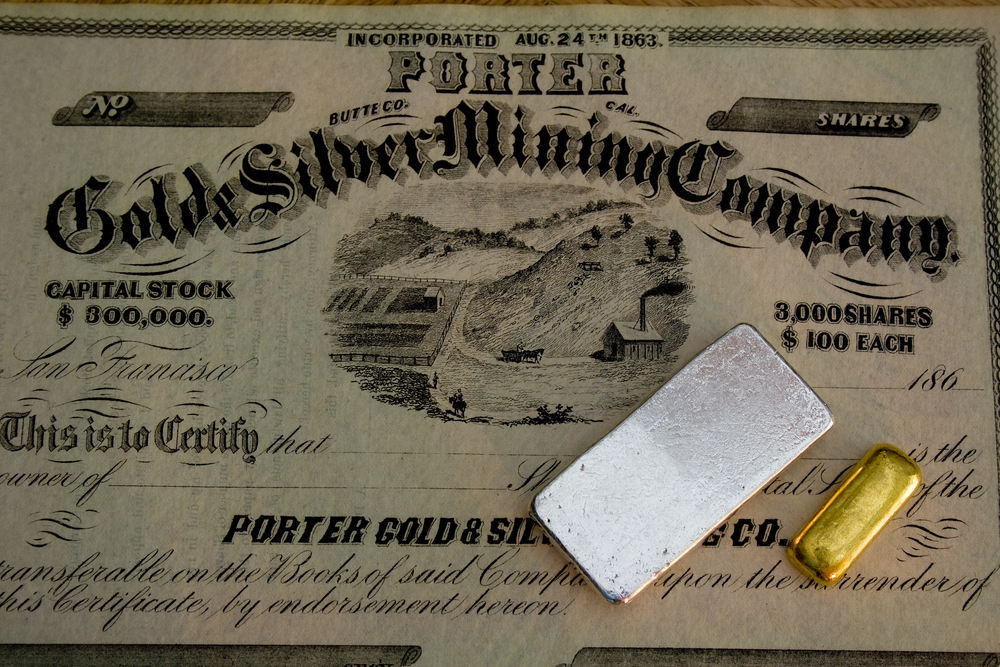 Mining stocks’ extreme weakness relative to gold continued yesterday, and while it may seem like the weakness has to have a limit, this limit is likely still quite far from the markets right now.

Let’s take a look at the long-term HUI Index chart for details. 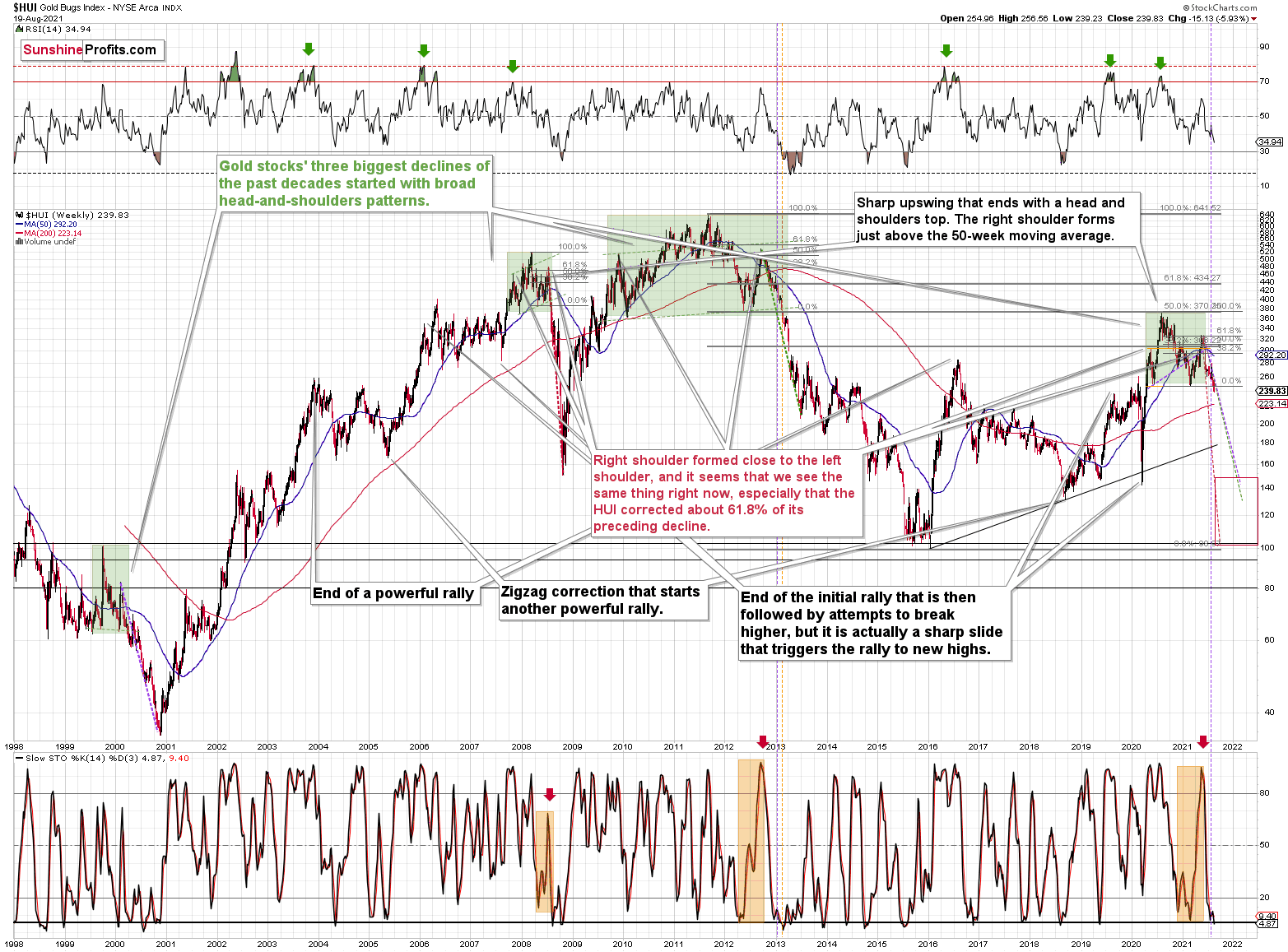 Remember when I told you that the tiny buy signal from the stochastic indicator was unlikely to trigger anything more than a brief pause? That was based on the analogy to what happened in late 2012 when miners paused, and then the decline simply continued. Well, gold stocks did exactly that and gold stocks declined once again. Right now, they are right after the breakdown to new yearly lows, and this has profound implications in light of the analogy to the 2012 – 2013 decline.

You see, when the HUI Index declined below the previous lows back in 2013, it meant that the biggest part of the slide was underway. The profit potential was still there, as it was still the first half of the biggest decline, but it meant that waiting for another big rebound in order to add to one’s short positions was not a good idea.

To clarify, there were two short-term consolidations soon after the breakdown in 2013. One of them took the HUI about 4% higher (in February 2013) and then we saw a decline. Afterwards, about 7%-8% correction (in March 2013) followed and then the biggest part of the decline took place.

Consequently, we might see a consolidation in gold stocks quite soon, but I wouldn’t expect it to be anything to write home about. At the current price levels, 4% – 8% means a decline of about 9 – 19 index. In the case of the GDXJ (if it moved in tune with the HUI), it would imply a move up by $1.5 – $3.

Of course, this is a hypothetical discussion of what might happen when gold stocks correct, but it doesn’t imply that they are likely to correct now. Actually, the opposite seems likely because of the HUI’s breakdown and the USD’s breakout. Again, forecasting gold stocks at higher levels in the near term might be a dangerous thing to do.

So, to clarify, the above-mentioned corrective upswing is likely to take place after another short-term move lower. If the GDXJ bottoms at about $35, then seeing it correct to about $36.5 – $38 will be quite normal.

As far as the short-term price moves in the mining stocks are concerned, my previous comments remain up-to-date. Yesterday, I wrote the following about the GDX ETF: 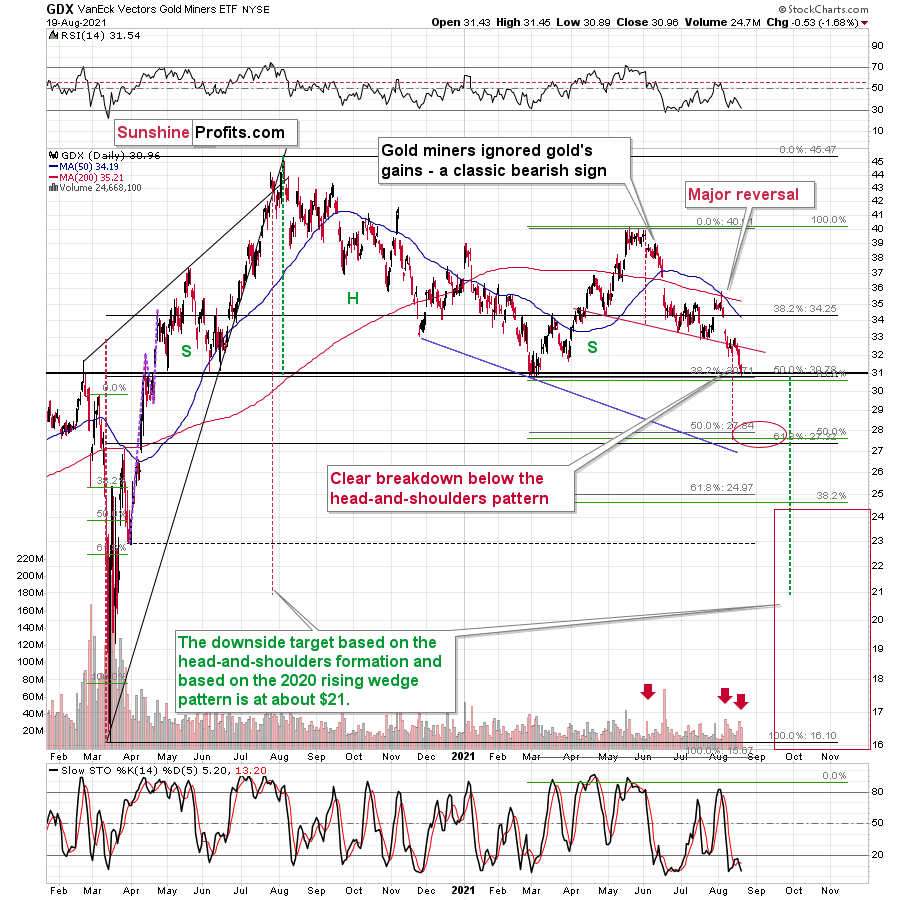 What happened? Senior gold miners finally broke decisively below the neck level of their head-and-shoulders formation, while juniors’ freefall continued.

Yesterday, senior miners closed below the neck level of the pattern for the second day, which means that the breakdown is almost confirmed.

The GDX has encountered strong support provided by the previous 2021 lows, but it doesn’t mean that we have to see a rebound here. Why? Because other proxies for mining stocks are already after the breakdown. This is the case with the GDXJ ETF, the HUI Index, and also the XAU Index. Even silver stocks – the SIL ETF –closed below the previous 2021 lows for the second day in a row.

So, did mining stocks encounter strong support here? Not really, only one of the proxies did – the GDX ETF. The remaining ones are already after a breakdown to new 2021 lows, and if we get a weekly close below them as well, the breakdown will be confirmed.