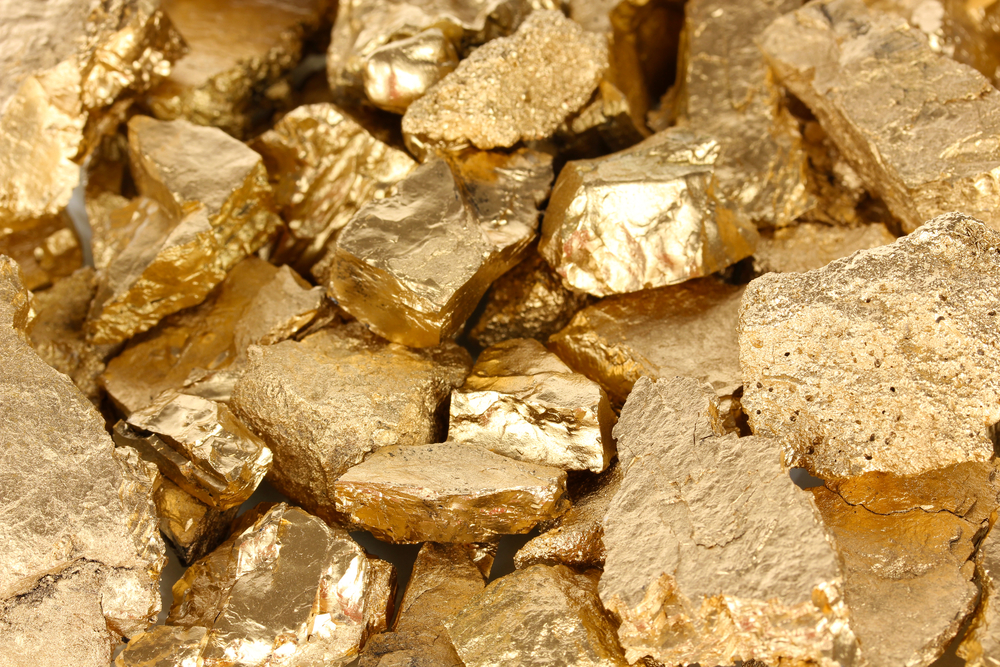 At this writing a week ago, Gold “near-term” was confirming a negative turn across various tried-and-true technical studies. But there’s nothing like a little Federal Reserve concern over “stretched valuations” of assets to rapidly whirl price right back ’round to the upside. And in the process of sporting its best up week in half-a-year (26 weeks since that ending 06 November), Gold’s weekly parabolic trend flipped from Short to Long as we see here: 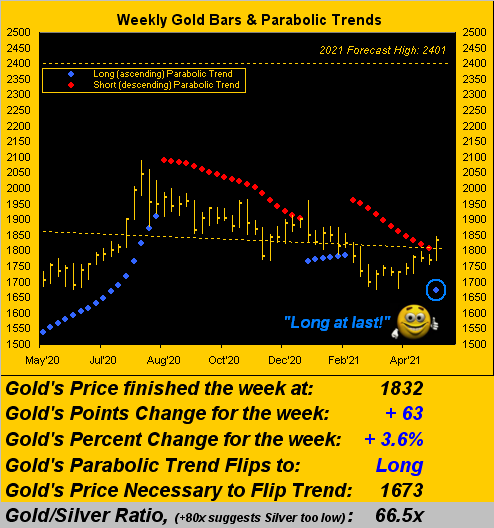 Moreover in going back to our 13 March missive entitled “Higher Gold from Here” (price then 1726), we’d penned this key paragraph, now oh so apropos:

“…We know, and you know, that Federal Reserve Chairman Powell, his Fed Presidents and FOMC all know, the stock market is horribly due for a massive blow. And the key unmentionable in the fertile minds of every one of them is exactly what Stephen Stills admitted to the masses at Woodstock pre-dawn on 18 August 1969: “We’re scared s**tless.” And the FedFolk cannot prevent it…”

And this past Thursday as stated by FedGov Lael “The Brain” Brainard on behalf of the Financial Stability Committee (great oxymoron): “The combination of stretched valuations with very high levels of corporate indebtedness bear watching because of the potential to amplify the effects of a re-pricing event.” (For you WestPalmBeachers down there, a “re-pricing event” is a stock market crash). That got Gold to 1800.

More alarming however was to then watch the stock market climb rather than nosedive!

And ’tis a very curious point that, Squire. If the rampant stimulus (per the U.S. money supply alone by “M2” having increased $5.2 trillion — or +34% –since the beginning of 2020) was meant for keeping everyone afloat whilst everything was shut down, what was the point if instead the dough to a material extent ended up in the stock market? Further, the U.S. Treasury looks to increase its borrowings four-fold to pay for more stimulus! WHY?

Ask yourself this question: Would the S&P 500 (already well-overvalued at 3338 on 21 February 2020 which is the day prior to COVID first hitting the market hard) today be at 4233? By any which way you can conceivably measure, the answer is categorically “NO!” Had COVID not occurred and we place a trendline from the S&P’s closing low of 667 a-way back from 09 March 2009 to 21 February 2020 — and then extend that trendline to right now — the S&P “would be” 3239 today. Yer darn tootin’ “The Brain” & Co. are concerned about a “re-pricing event”! (We’ve been concerned about it for years). Here’s the scary graphic: 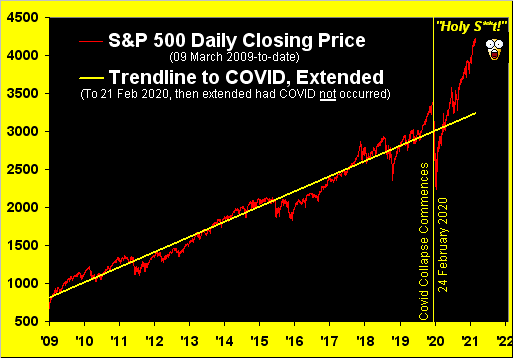 Meanwhile, things are “better” because apparently inflation is greater. “Corporate America Rides Wave of Inflation to Record Profits” pens Bloomy’s Lu Wang. And recall this year’s Q1 Chain Deflator as double the norm? Mind the price of your “Happy Meal”.

Yet we nonetheless read that “millions” of folks remain unemployed. Why not, when you can stay at home and buy stocks all day long, eh? Life is good. Just look at the Economic Barometer:

And despite a horribly off-the-mark April Payrolls figure as reported by the Bureau of Labor Statistics, that provided by ADP bettered their March number, whilst that prior month’s Factory Orders swung from shrinkage to growth. But March’s Wholesale Inventories backed up and Consumer Credit slowed. Further, both the Manufacturing and Services readings for April declined as provided by the Institute for Supply Management. And as you regular readers know, hardly are we expecting the economy to boom given the creativity that essentially kept it going through the tough COVID slowing.

Further, looking toward the new week’s slate of incoming metrics, our sense is the Baro may be below where ’tis today come our next weekly missive.

Now to Gold through the eyes of our two-panel graphic with the daily bars from three months ago-to-date on the left and 10-day Market Profile on the right. You’ll recall with Gold’s baby blue dots having fallen below their +80% axis, that in turn caused us to abandon our “near-term” call for 1800. But then came “The Brain”, and we thank her for that. However, bear in mind (no pun intended) that the 1800s have been a congestive area for Gold: thus the substance of this past week’s push stands to be put to the test through here: 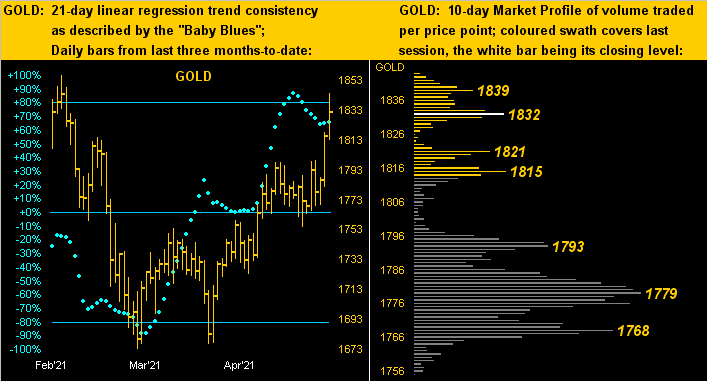 Too, we’ve the same graphic set for Silver, her “Baby Blues” tiptoeing across their +80% axis (at left) with her trading supports clearly denoted in her Profile (at right). Note that the directional track of her daily bars closely matches that of Gold, meaning that Sister Silver clearly is adorned in her precious metal pinstripes (rather than her industrial metal jacket): 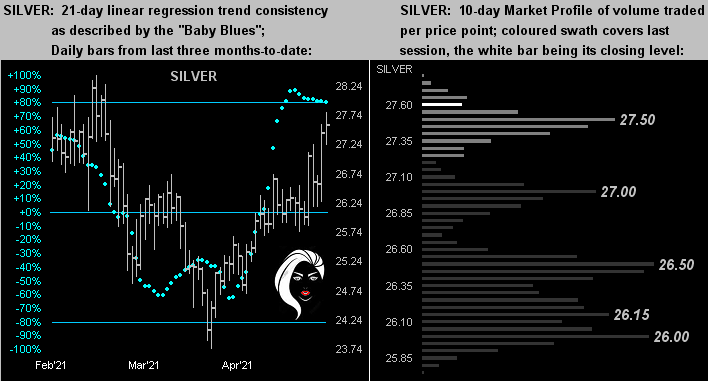 Finally from our “Old Saw Dept.” we simply point out that the stock market — stimulus aside — has nothing remaining upon which to stand. You saw above the extended trendline graphic for the S&P 500 were COVID not to have occurred. The “live” price/earnings ratio for the S&P is an impossibly high 61.1x and the Index’s rise notably is built but on froth. For the website’s S&P moneyflow says it all, whether by the week, the month or the quarter: 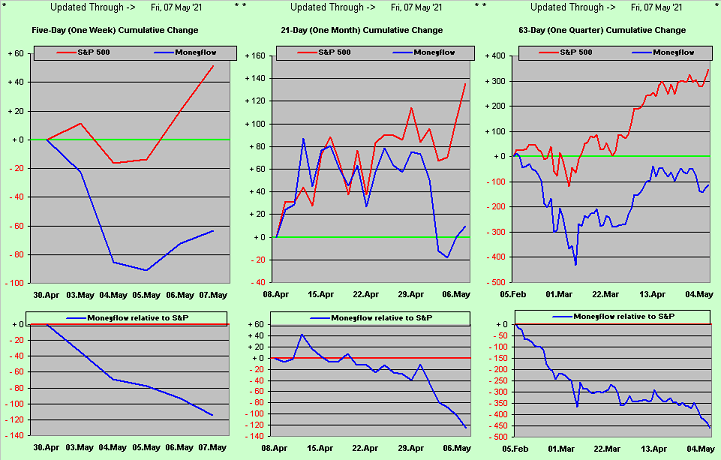 Next week brings our 600th consecutive Saturday writing of The Gold Update. To celebrate? Get some Gold, mate!