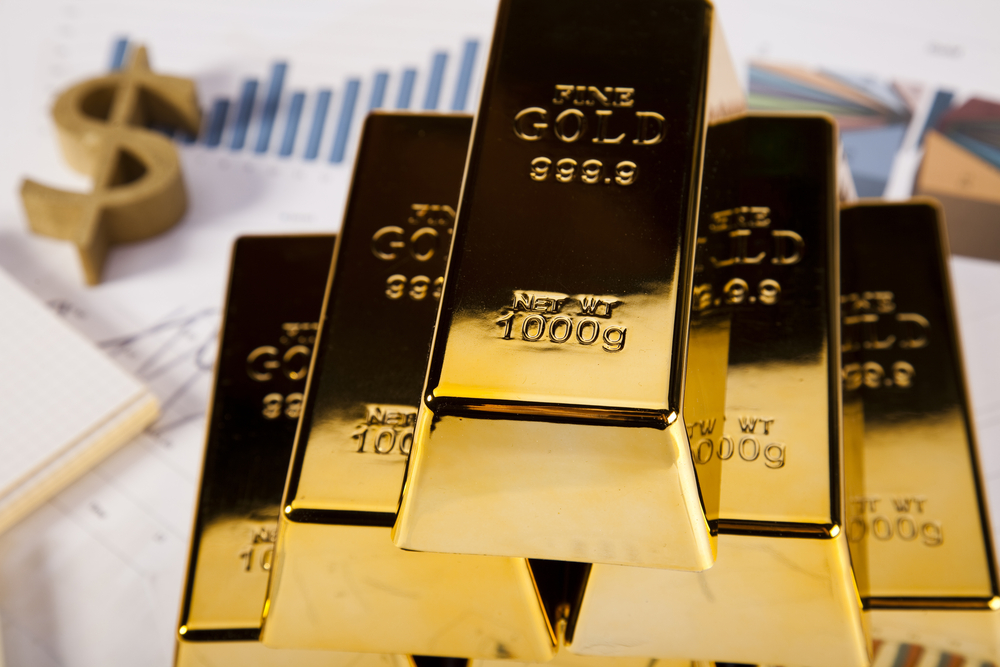 While gold shrugged off the Aug. 8 ‘flash crash’ and bounced back above its June lows, the yellow metal’s renewed sense of swagger hasn’t been mimicked by its precious metals peers. For example, while gold ended the week up by 0.86%, the GDXJ ETF (our short position) ended the week down by 1.72%.

Furthermore, while gold jumped by roughly $15 last week, the HUI Index declined by five index points. And with the bearish underperformance often a precursor to profound medium-term drawdowns, the precious metals are behaving like its 2012-2013. Last week is yet another confirmation of the analogy.

Case in point: after the HUI Index recorded a short-term buy signal in late 2012 – when the index’s stochastic indicator was already below the 20 level (around 10) and the index was in the process of forming the right shoulder of a huge, medium-term head-and-shoulders pattern – the index moved slightly higher, consolidated, and then fell off a cliff. 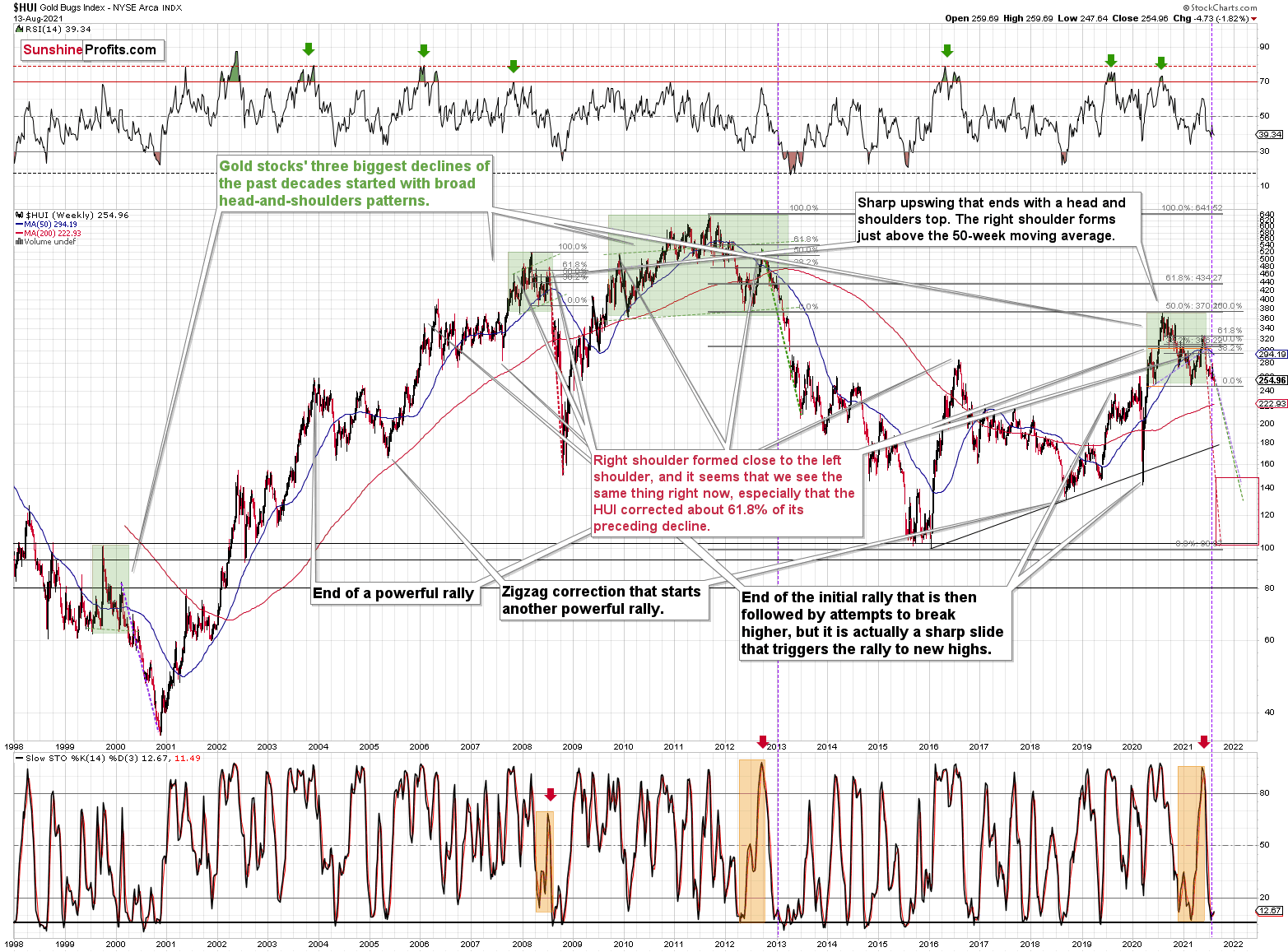 To explain, can you see the HUI’s rally at the end of 2012 that followed a small buy signal from the stochastic indicator? I marked it with a purple, dashed line. No? That’s because it’s been practically nonexistent. The HUI Index moved higher by so little that it’s impossible to see it from the long-term point of view. On top of that, with the shape of gold’s recent price action, its RSI, and its MACD indicators all mirroring the bearish signals that we witnessed back in December 2012, the current setup signals that we’re likely headed for a similar swoon.

For context, I warned previously that the miners’ drastic underperformance of gold was an extremely bearish sign. I wrote the following about the week beginning on May 24:

(…) gold rallied by almost $30 ($28.60) and at the same time, the HUI – a flagship proxy for the gold stocks… Declined by 1.37. In other words, gold stocks completely ignored gold’s gains. That shows exceptional weakness on the weekly basis and is a very bearish sign for the following weeks.

And why is this quote so important? Well, because the bearish phenomenon still remains intact. As mentioned, with gold rising by roughly $15 and the HUI Index declining by about five index points, the bearish underperformance is accelerating. Precisely, something similar happened during the week beginning on July 6. The gold price rallied by $27.40, and the HUI Index declined by 1.39. As a result, with the HUI Index’s ominous signals still present, if history rhymes (as it tends to), medium-term support will likely materialize in the 100-to-150 range. For context, high-end 2020 support implies a move back to 150, while low-end 2015 support implies a move back to 100. And yes, it could really happen, even though such predictions seem unthinkable.

In addition, the drastic underperformance of the HUI Index also preceded the bloodbath in 2008. To explain, right before the huge slide in late September and early October, gold was still moving to new intraday highs; the HUI Index was ignoring that, and then it declined despite gold’s rally. However, it was also the case that the general stock market suffered materially. If stocks didn’t decline back then so profoundly, gold stocks’ underperformance relative to gold would have likely been present but more moderate.

Nonetheless, bearish head & shoulders patterns have often been precursors to monumental collapses. For example, when the HUI Index retraced a bit more than 61.8% of its downswing in 2008 and in between 50% and 61.8% of its downswing in 2012 before eventually rolling over, in both (2008 and 2012) cases, the final top – the right shoulder – formed close to the price where the left shoulder topped.

And in early 2020, the left shoulder topped at 303.02. Thus, three of the biggest declines in the gold mining stocks (I’m using the HUI Index as a proxy here) all started with broad, multi-month head-and-shoulders patterns. And in all three cases, the size of the declines exceeded the size of the head of the pattern.

Furthermore, when the HUI Index peaked on Sep. 21, 2012, that was just the initial high in gold. At that time, the S&P 500 was moving back and forth with lower highs. And what was the eventual climax? Well, gold made a new high before peaking on Oct. 5. In conjunction, the S&P 500 almost (!) moved to new highs, and despite bullish tailwinds from both parties, the HUI Index didn’t reach new heights. The bottom line? The similarity to how the final counter-trend rally ended in 2012 (and to a smaller extent in 2008) remains uncanny.

As further evidence, let’s compare the behavior of the GDX ETF and the GDXJ ETF. Regarding the former, the senior miners (GDX) are in the midst of forming an ominous bear flag and the volume that accompanied Friday’s (Aug. 13) corrective upswing was relatively weak and it declined while the flag pattern was formed – just as it should if the formation was valid.

Conversely, the GDX ETF did invalidate the breakdown below the neckline of its bearish H&S pattern (which is a bullish sign). However, the GDXJ ETF did not. And with the junior miners’ initial plunge (the pole) implying a continuation of the downtrend (following a consolidation that forms the flag), there are more indicators weighing down the gold miners than lifting them up. 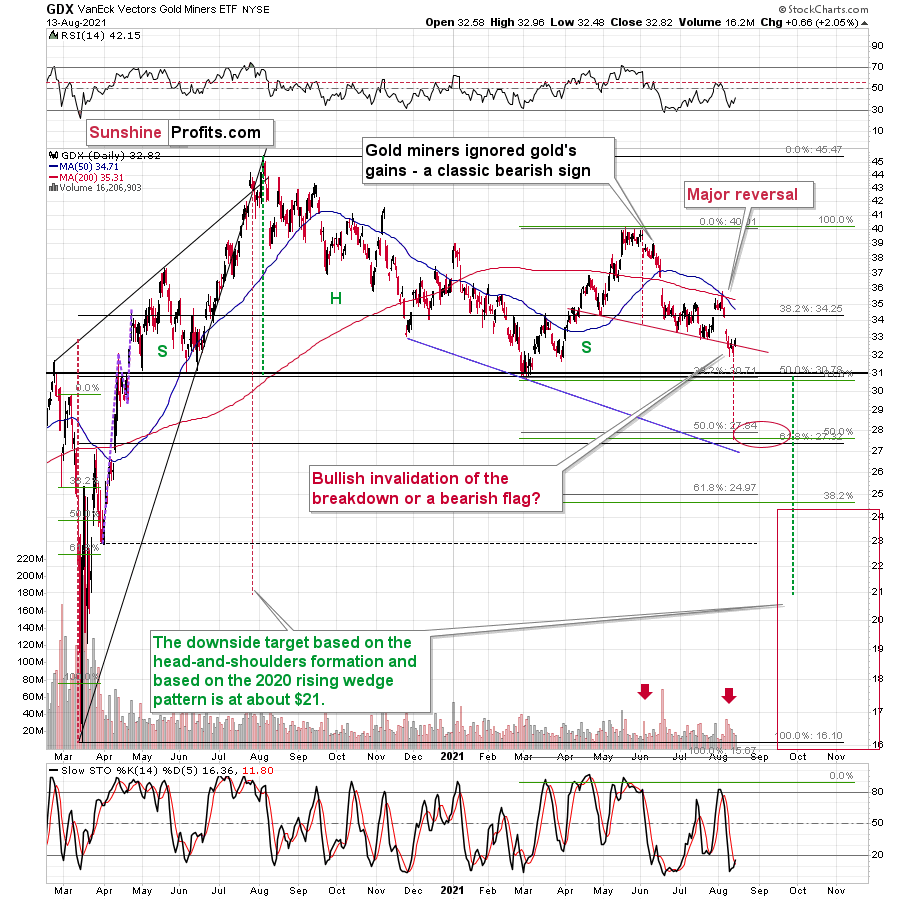 Wave the Flag! The Bear Flag!

Speaking of the GDXJ ETF, not only are the junior miners lagging behind their senior counterparts, but the four-hour chart provides a clear visual of the initial breakdown and the formation of the current bear flag. 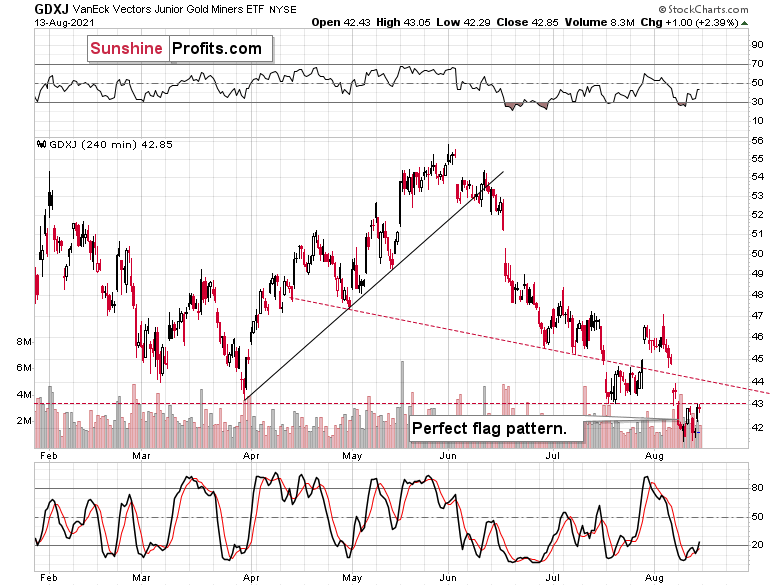 The flag is perfect, and it took place on relatively declining volume, suggesting that another move will also be to the downside. After all, the moves that follow flags tend to be similar to the ones that preceded them.

The price levels at which the flag was formed are also very important, and it’s clearer on the daily chart. 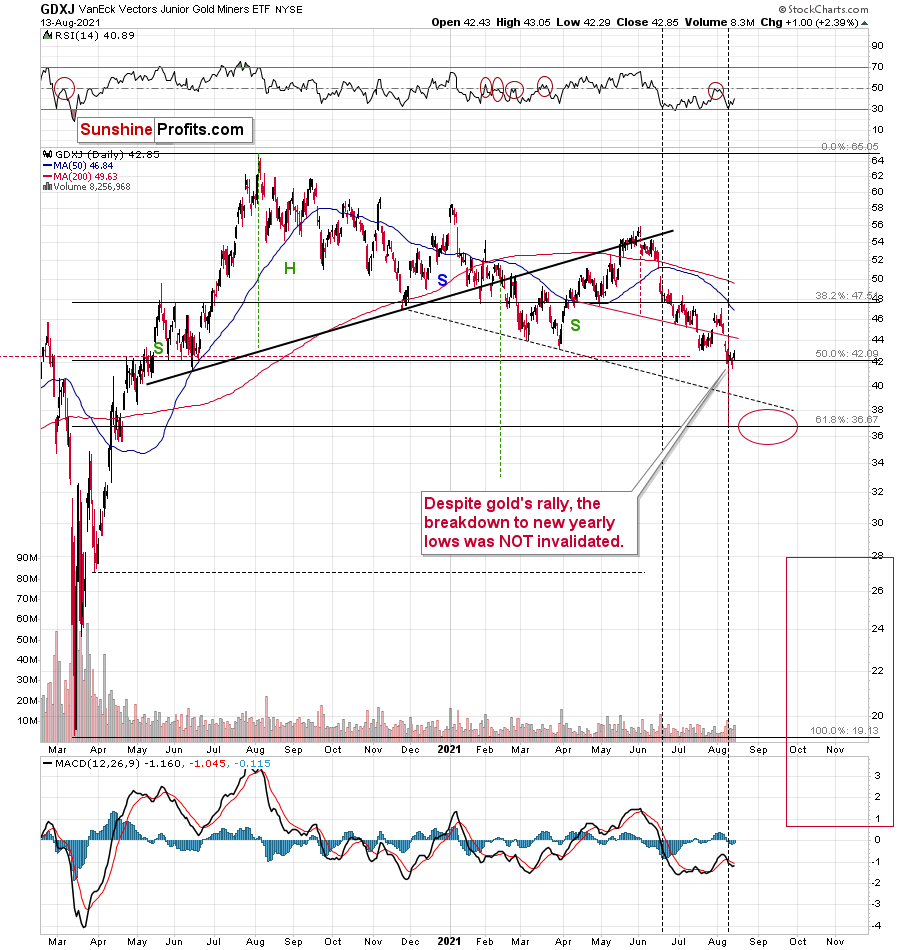 Junior miners broke below the previous 2021 lows, and they held this breakdown, even though gold rallied quite visibly last week. This serves as a great confirmation that the move lower is about to take place.

And how should we expect the climax to unfold? Last week, I wrote the following:

Well, the GDXJ ETF may consolidate in the short term, but lower lows are still likely, and initial support should materialize at roughly $37 (the 61.8% Fibonacci retracement level). Thereafter, a short-term corrective upswing should follow before the GDXJ ETF reverses course once again and records its final bottom near the end of the year – at much, much lower price levels. All in all, it seems that our profits on the GDXJ (short position in it) are going to become MUCH bigger before this decline is over.

The above remains up-to-date. In fact, we already saw the short-term consolidation last week, so the decline could resume any day now.

In conclusion, the gold miners’ continued underperformance of the yellow metal is akin to a fire alarm signaling an impending blaze. And while many investors have forged through the smoke in 2021 and suffered a loss of breath in the process, our medium-term forecast does not change our outlook for gold, silver and mining stocks over the long term. With the trio underpinned by robust long-term fundamentals and their medium-term drawdowns likely to elicit secular buying opportunities, we’re confident that the precious metals will remain atop investors’ wish lists for years to come.