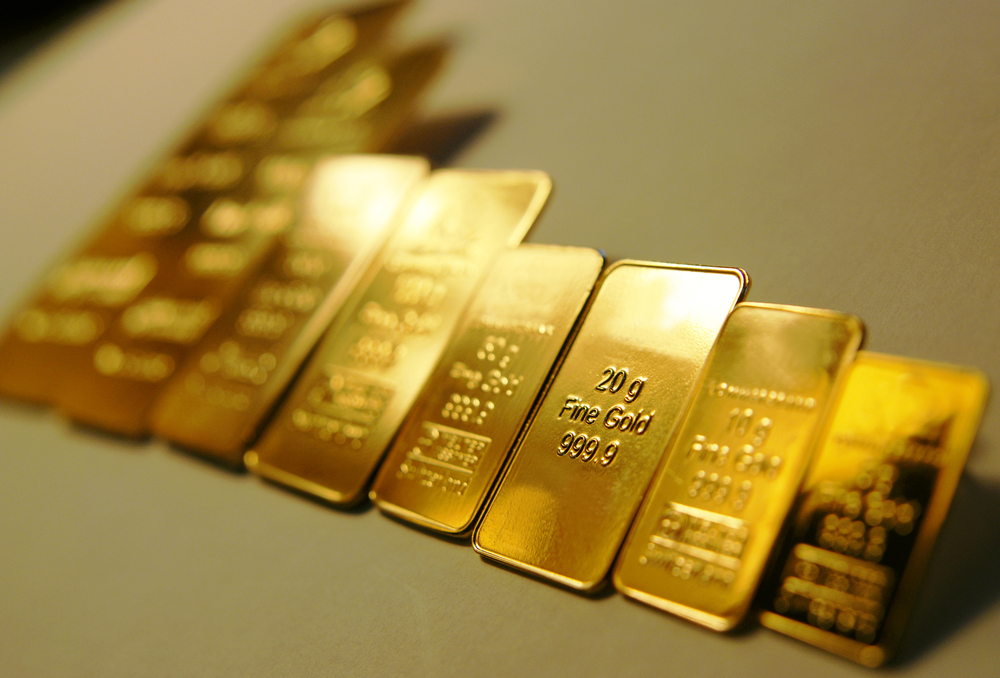 To be clear: it’s something very important right now. Juniors, as well as senior mining stocks, are very weak compared to gold, which means that they are not reacting to gold’s gains but multiplying gold’s declines instead. This doesn’t just mean that the profits on our short positions in juniors are increasing almost constantly – it also means that the entire precious metals sector is about to fall much further. This kind of underperformance preceded the 2013 slide, and we haven’t seen it – to this extent – in years. This is huge. 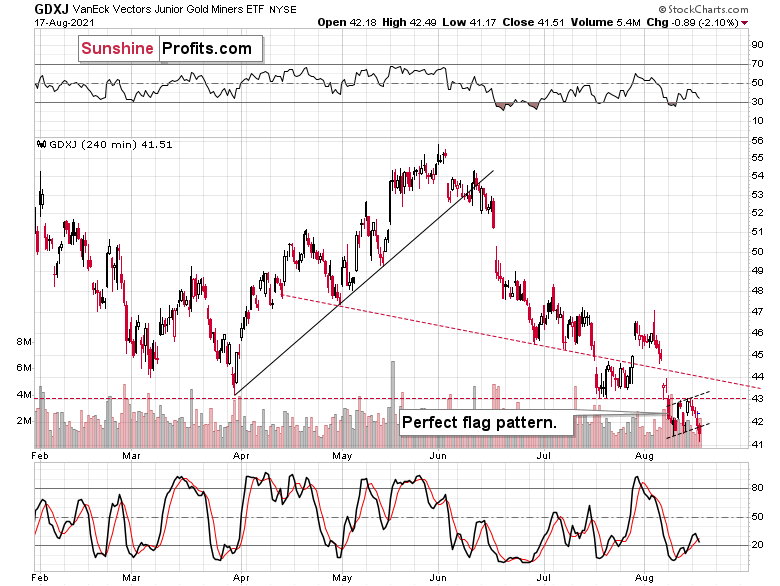 Junior gold miners – the GDXJ ETF – just moved to new 2021 lows after completing a flag pattern. This is bearish not only on its own but especially when compared to what gold did. 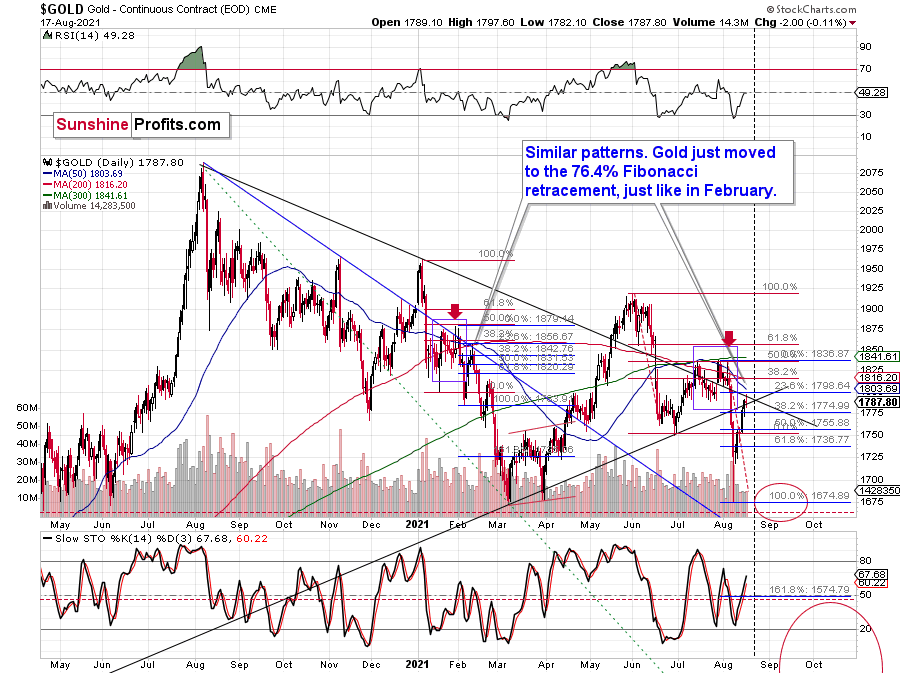 Gold moved just $2 lower yesterday. This near-nothing was enough to trigger a breakdown to new lows in the related sector – junior mining stocks. Gold junior miners’ current performance is truly one of the weakest that I’ve ever seen.

And just imagine what horrors await the prices of the mining stocks if a mere $2 decline in gold was enough to trigger a breakdown to new lows. And gold seems to be about to slide once again!

Now, based on the triangle-vertex-based reversal that’s due on Monday, it could be the case that gold waits a bit before sliding. However, given the similarity to how it declined in the first quarter of the year, it seems that the top in gold is either in or at hand.

I explained the similarity to Q1 before, but here’s a quick recap.

After declining sharply (January and June) and forming a double bottom with the second bottom slightly lower, it then corrected half of the decline forming more than one top close to the 50% retracement and then declined sharply once again.

Back in February 2021, gold corrected about 76.4% of the decline (which is a less popular but still a Fibonacci retracement level – marked with blue). Right now, this retracement is just below the $1,800 mark. So, if history rhymes once again, gold will be likely to move close to $1,800 and then decline once again.

I’ve recently been asked to compare the performance of the 10-year yields and gold on one chart and to comment on them. 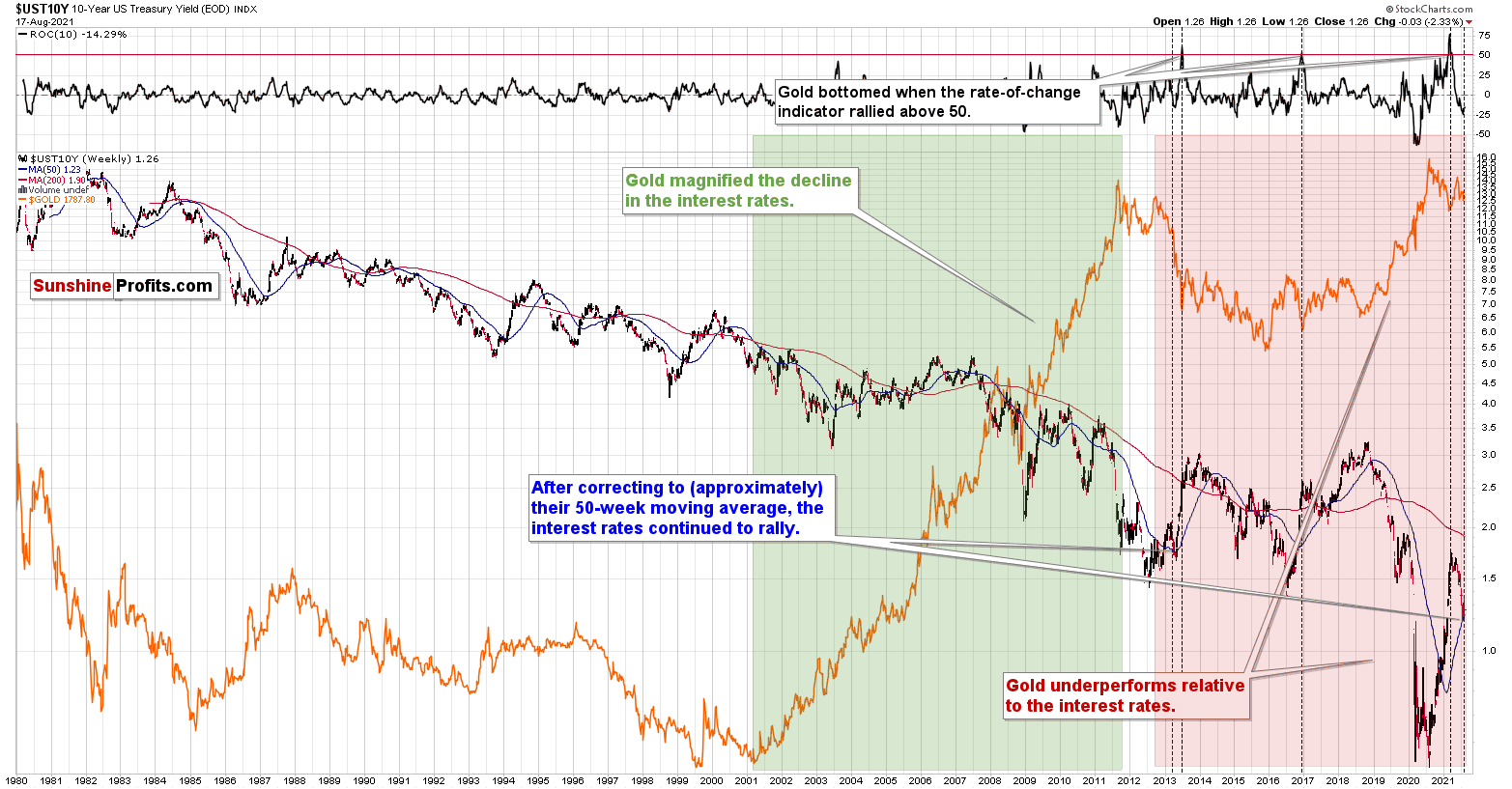 There are a couple of interesting things that the 10-year-yield chart and gold can tell us.

One of them is that when the ROC (rate of change) indicator based on the yields rallies above 50, it tends to correspond to medium-term bottoms in gold. This happened 3 times in the past 40+ years, and it worked in each case. This is likely to be important in a couple of months, but it’s not that relevant today.

Another interesting feature is that, overall, gold has not been performing well relative to the long-term yields. Between 2001 and 2011, gold was performing very well relative to yields – soaring when the yields were declining. However, that has not been the case since late 2012. Sure, gold managed to briefly move above its 2011 highs before invalidating the breakout and declining, but please compare how huge a decline in yields it took to trigger this move.

The decline in rates that made gold more than double its price from the 2008 bottom was relatively small (from ~2% to about ~1.5%). And the decline in yields from 1.5% in mid-2019 to about 0.5% in mid-2020 made gold increase its value by “only” 1/3. Again – a decade ago it took half a percentage point to make gold double, and now it took a full percentage point to make gold increase its value by only 1/3. Sure, 1/3 of gold’s price is a lot on a nominal level, but when compared to doubling its value, it’s much smaller. And when compared with the size of the moves in rates, it turns out that gold was now about 6 times less inclined to rally when the rates declined.

This seems bearish for gold at first glance, and it is such in reality.

The final observation is the most concrete and the most actionable. As I described in my previous gold trading analyses, what we are seeing now in gold is very similar to what we saw in 2012-2013, and the above-mentioned super-weak performance of gold stocks confirms it.

What’s very interesting is that after gold’s final top and yield’s final bottom (mid-2012), the yields rallied, and then they corrected to more or less their 50-week moving average. And when that was taking place, gold moved close to their previous lows (that was before the biggest part of the plunge).

The Economic Symposium in Jackson Hole and the news coming from it could trigger the above-mentioned moves. The September FOMC is another candidate. Then again, since markets are forward-looking, any piece of news that could hint at the upcoming tapering could trigger the moves. That’s what the weak performance of gold juniors vs. gold tells us – the market is ready to slide, and when the trigger comes is not that important. In fact, the precious metals market is likely to decline even without a specific news-based trigger.