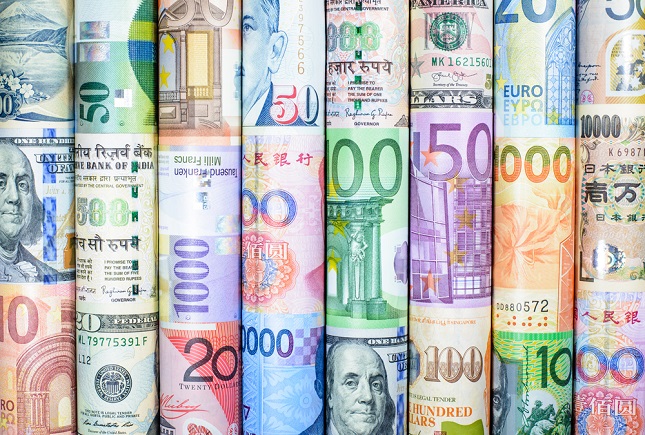 The Nikkei rose for the first time this week, and its 1.5% gain led the region. Europe’s Dow Jone Stoxx 600 is little changed as it continues to move sideways in a 320-340 range. US shares are slightly firmer.  In the bond market, the rally in the European periphery is the standout, as the ECB liberalized its collateral rules further. The US 10-year year is virtually unchanged at around 62 bp. In the foreign exchange market, the dollar is mixed.
The Norwegian krone is surging more than 1%, and the dollar bloc is also firmer, while the euro complex (euro, Swiss franc, and Danish krone) are nursing small losses. JP Morgan’s Emerging Market Currency Index is snapping a three-day slide. Gold, which approached $1660 earlier this week, is extending its recovery to press against $1725. Oil continues to recover from this week’s epic sell-off.  June WTI is a little below $16, and June Brent is a little above $22 a barrel.

Japan’s preliminary PMI fell further, though the market reaction was minimal. The manufacturing PMI eased to 43.7 from 44.8, and the service PMI fell to 22.8 from 33.8.  This saw the composite slide to 22.8 from 36.2. The BOJ meets next week. While it is unlikely to cut rates deeper into negative territory, many expect the BOJ to announce new efforts to ensure bank lending.
Australian’s preliminary PMI also fell. The composite slumped to 22.4 from 39.4. It is the sixth decline in the past seven months. Manufacturing slipped to 45.6 from 49.7, while the services component nearly was halved to 19.6 from 38.5.
South Korea’s economy contracted 1.4% in Q1 from the end of last year. It was largely in line with expectations.  It offset the 1.3% expansion in Q4 19. Household consumption fell 6.6% on the quarter. During the Asian financial crisis in the late 1990s, consumption crashed twice as much. Imports fell more than exports, which means that the net export component contributed to GDP. Public spending rose a little less than 1% on the quarter after a 2.5% jump in Q4 19. The risk is still on the downside this quarter.
Hong Kong Monetary Authority intervened for the third consecutive session to sell Hong Kong dollars and buy US dollars. It appears to have bought nearly $1 bln this week so far. The relatively wide interest rate differential of around 90 bp boosts the demand for HKD.
The dollar is in less than a 20 tick range on either side of JPY107.70. It has not moved off the JPY107-handle this week yet. Large option expirations today may reinforce the narrow band. There are about $3.6 bln in options struck between JPY107.25 and JPY107.50 that expire today. On the topside, are options for about $1.3 bln placed between JPY107.90 and JPY108.00.
The Australian dollar is firm within the range established earlier this week between roughly $0.6250 and $0.6400. It fell in the first two sessions this week and is edging up today for the second session. Net-net, it is off slightly on the week. The greenback drifted a little lower against the Chinese yuan.  It has gained once in the last five sessions.

The flash PMI readings were worse than expected. The broad story is the same, nearly everywhere. Manufacturing fell while service activity imploded. The composites reflect the importance of the latter. German manufacturing PMI fell from 45.4 to 34.4. France’s fell to 31.5 from 43.2. The service PMI fell to 15.9 in German (from 31.7) and to 10.4 in France (from 27.4).
The composite reading was halved in Germany to 17.1 (from 35.0) and even more in France (11.2 from 28.9). The composite reading for the eurozone as a whole stands at 13.5, down from 29.7. The UK’s reading was similar. The manufacturing PMI is at 32.9 from 47.8. The service PMI fell to 12.3 from 34.5, while the composite stands at 12.9 (down from 36.0).
Ahead of next week’s meeting, the ECB announced yesterday that it would accept as collateral bonds that had been rated investment grade before April 7. The concern is that in the period ahead, some companies, and perhaps some sovereigns, may lose their investment-grade status, which would further disrupt the ECB’s transmission mechanism by adversely impacting the ability of banks to borrow from the ECB.
The Federal Reserve indicated that it would buy some bonds that recently lost their investment-grade ratings. The ECB has not indicated it would purchase such instruments, but it did leave the door open for a future move. S&P announces the results of its review of Italian debt tomorrow. It is expected to cut it by one notch, which would leave it at its lowest investment grade reading. Recall, the ECB takes the highest rating of the top four agencies (including DBRS).
The EU leaders meet today to find an agreement on a larger assistance package. The size and modalities are not clear. Two things seem likely. First,  a compromise will be on the EU level, not the eurozone. Second, a substantially larger budget and an EU debt instrument look likely. The European project, as it were, is shaped by its responses to crises, and although many argued that it was mutualization of debt or bust, a compromise that falls shy of it,  is likely.
The euro has been sold below $1.08 for the first time in a couple of weeks today. It has tested the month’s low near $1.0770. Last month’s low was near $1.0635. There are large options that expire today that may influence the price action. There are 3.2 bln euro in options between $1.0800 and $1.0810 and an option for 525 mln euros at $1.0790.
There is a billion-euro option at $1.0750. On the upside, there is a two-billion euro in options struck in the $1.0830-$1.0840 area. The intraday technicals are overextended for the euro as the North American session is about to start. Sterling is trading quietly inside yesterday’s range, which was inside Tuesday’s range. It has spent most of the past 24-hours between $1.2300 and $1.2360.  It finished last week near $1.25.

The US sees the preliminary April PMI, March new homes sales, and the April Kansas Fed’s manufacturing survey, but it will be the weekly jobless claims that command the most attention.  It is the closest thing to a real-time economic snapshot.  The Good Friday holiday may have dampened the number of people filing for unemployment benefits for the first time. The median forecast in the Bloomberg survey is for a 4.5 mln jump. Ideas that the backlog from some states are being absorbed has fanned talk of another reading above 5 mln. Separately, the House of Representatives is expected to approve the new spending bill (~$485 bln) that replenishes the funds for the Payroll Protection Plan. The bill is expected to pass before midday. Another bill that provides state and local governments money will be on next month’s agenda.
The US dollar gained about 1.45% against the Canadian dollar during the first two sessions this week and pared those gains yesterday and is slightly heavier today as well. Initial support is seen a little above CAD1.4100. Resistance is seen in the CAD1.4235-CAD1.4265 area. Firmer equities and oil favor the Loonie.
The US dollar settled last week a little below MXN23.70 and has risen in the first three sessions this week. The greenback is firm near MXN24.50 after having earlier approached yesterday’s high near MXN24.69.  Mexico reported over 1000 new virus cases yesterday for the first time as the contagion looks to be spreading quickly. The IMF says Mexico has committed among the least resources to combat the economic and financial consequences even though it estimates Mexico’s economy will be among the hardest hit.
This article was written by Marc Chandler, MarctoMarket.