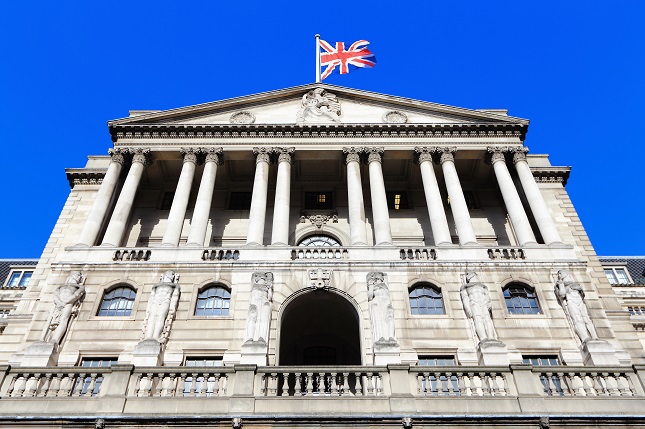 The Fed’s switch in tact has send the buck soaring, as dollar bulls rejoice at the thought of a better-than-expected US economic recovery prompting the Fed into sooner-than-expected action.

However, from a technical perspective, the USD index is having a breather at the time of writing. This index is trying to pull back from overbought conditions, having broken above the upper bound of its Bollinger band while its 14-day relative strength index attempts to retrace back to the sub-70 region. 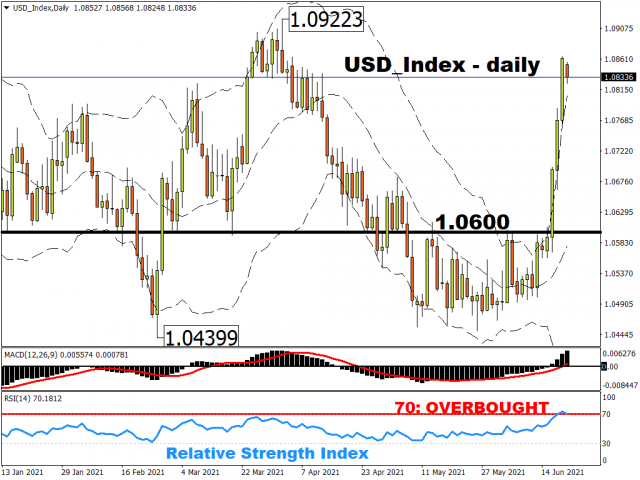 Note that this USD index is an equally weighted index comprising six major currency pairs, as opposed to the benchmark DXY which has different weightings for its 6 constituents (Euro being the largest at 57.6%, and the Swiss Franc accounting for just 3.6% of the DXY).

Still, should Fed officials tow a hawkish line over the coming days, in light of what had transpired at last week’s FOMC meeting, that could spell further gains for this USD index, potentially seeing it match its year-to-date high.

This change in approach by the Fed could prompt the Bank of England to follow suit, framing the BOE’s policy commentary in a new light. Note that UK inflation climbed above the central bank’s target for the first time in two years, with the CPI coming in at 2.1% year-on-year in May. This could hasten the BOE’s attempts to rein in surging consumer prices.

Overall, markets remain optimistic about the UK economic reopening considering its elevated vaccination rates. Still, the spread of the Delta variant remains as a source of concern, having pushed back the full reopening of the UK economy which was initially due to happen today.

It remains to be seen how the BOE will interpret such risks, and how it will impact Sterling. 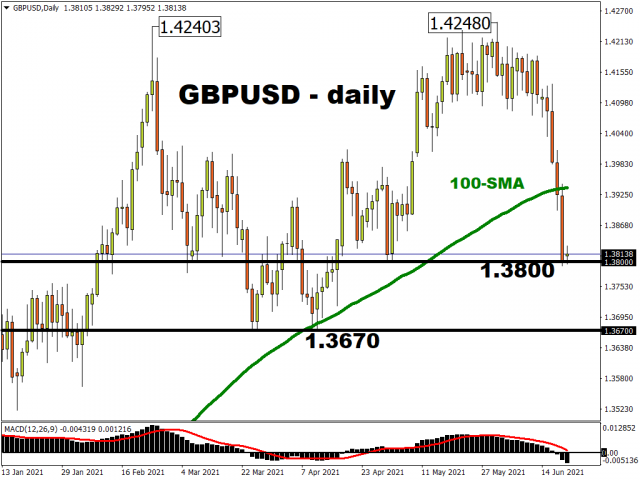 GBPUSD has tumbled under the weight of the soaring greenback in recent sessions, having broken below its 100-day simple moving average (SMA), though finding support for the time being around the 1.38 mark which proved reliable in March as well as end-May. Stronger support may arrive at the 1.3670 region.

To be clear, the BOE is widely expected to leave its policy settings untouched this month, just as the Fed did. However, it’s the signaling of its future policy intentions that could rock markets once more.

Should the hawkish voices at the Bank of England also grow louder, emulating their peers from across the pond, that could allow GBPUSD to find a firmer footing above its 100-day SMA.