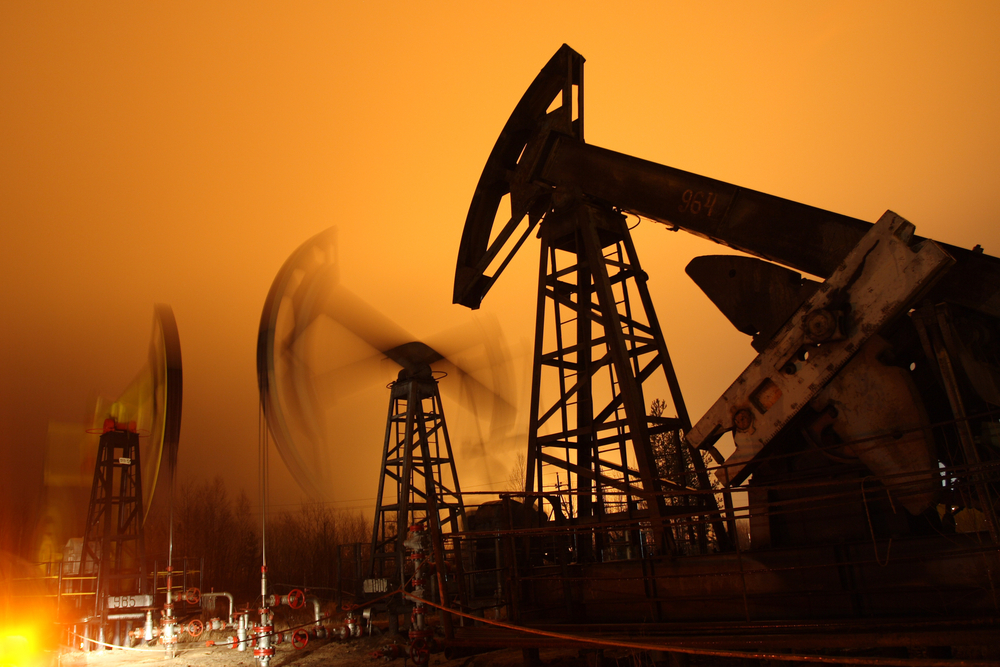 The below summary highlights futures positions and changes made by hedge funds across commodities, forex and financials up until last Tuesday, June 29. A week where risk-on courtesy of stable Treasury yields and an unchanged dollar helped drive the VIX index to a 16-month low and U.S. stocks, especially the Nasdaq to fresh record highs. Commodities generally traded higher with the Bloomberg Commodity Index rising 1.8% thereby supporting speculative net buying in 14 out of the 24 futures contracts tracked in this report.

The commodity sector returned to form with broad gains seen across most sectors, thereby leaving the Bloomberg Commodity Index up by 1.8% on the week. The most noticeable exceptions being precious metals where gold-selling continued, grains where positions were adjusted lower ahead of important acreage and stock reports last Wednesday, and also crude oil where some profit-taking emerged ahead of the OPEC+ meeting. The 3% increase in the total net long to 2.3 million lots or $134.6 billion nominal value was led by natural gas (+61.4k lots), RBOB Gasoline (7.3k), wheat (7.8k), cotton (9.3), and HG Copper (8.3k). The biggest reductions were seen in WTI crude oil (-14.2k) and the soybean complex. 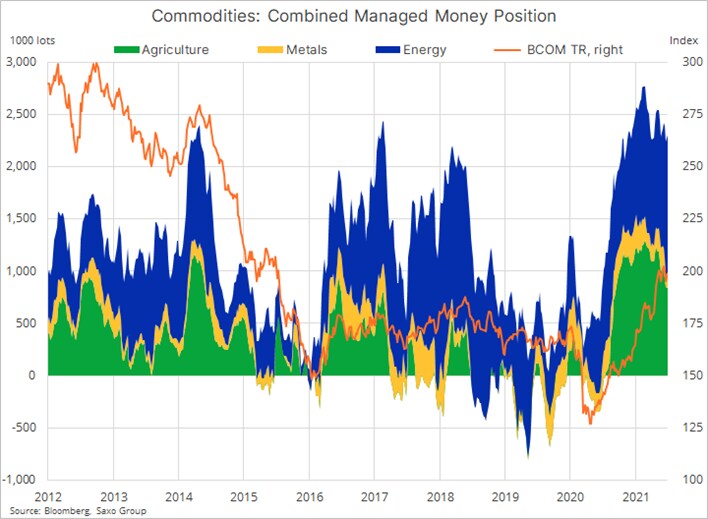 Despite a continued rally in crude oil during the reporting week, speculators opted to make a small reduction ahead of last week’s OPEC+ meeting. Selling was most pronounced in WTI with the bulk of the overall 3% reduction to 408k lots being long liquidation with no signs of short sellers emerging.

Crude oil trades close to unchanged with market participants trying to decipher what happens next within the OPEC+ group following a rare diplomatic spat between the UAE and Saudi Arabia. The UAE is looking for better terms and have so far refused the join a deal that would increase production by 400k bpd per month from August to December. At stake if the unity weakens, is the group’s ability to continue to control prices, and with this in mind the market is still refusing to believe that a deal will not be struck eventually. The OPEC+ meeting look set to resume Monday afternoon Vienna time. Twitter users can follow developments on Twitter by using #OOTT and #OPEC.

Speculators cut bullish gold bets by 5% to an eight-week low in the week to June 29, mostly due to fresh short selling. It highlights the prospect for a potential short-covering rally on a break above $1814. Silver and platinum both got bought with buyers also returning to copper for the first time in two months to lift the net long by 43% to 27.6k lots.

Gold trades near a two-week high, and resistance at $1795 as concerns over an earlier-than expected rate hike by the Federal Reserve eased following a mixed bag of U.S. job data on Friday. However, with U.S. ten-year real yields reaching low levels last seen prior to the mid-June FOMC meeting, the recovery so far looks anything but impressive. Focus this week on FOMC minutes and the dollar which currently provides most of the directional input. Speculators meanwhile cut bullish gold bets by 5% to an eight-week low in the week to June 29, mostly due to fresh short selling. It highlights the prospect for a renewed short-covering rally on a break above $1814.

Ahead of key acreage and stock reports from the USDA last week, the grain market saw a small net reduction in bullish bets primarily driven by a reduction in all three soybean contracts on rising short selling. Speculators meanwhile, and rightfully so, maintained their belief in higher corn prices by increasing the net long by 1% to 245k lots. Wheat was mixed with the selling of CBOT returning the net position to neutral while the net long in Kansas wheat received a 53% boost to 22.7k lots on emerging drought worries.

In forex, broad dollar buying continued albeit at a slower pace than the previous week when the market reacted to the mid-June hawkish FOMC meeting. Speculators cut their greenback short against ten IMM currency futures and the Dollar index to a nine-week low at $11 billion. Dollar buying was most noticeable against the JPY which despite trading close to unchanged on the week saw bearish bets jump 30% or 16k lots to a two-year high at $7.9 billion equivalent. Long liquidation was seen in EUR (-1.9k), CHF (-2.5k) while small buying was seen in CAD (+2.6k) and MXN (+9k) 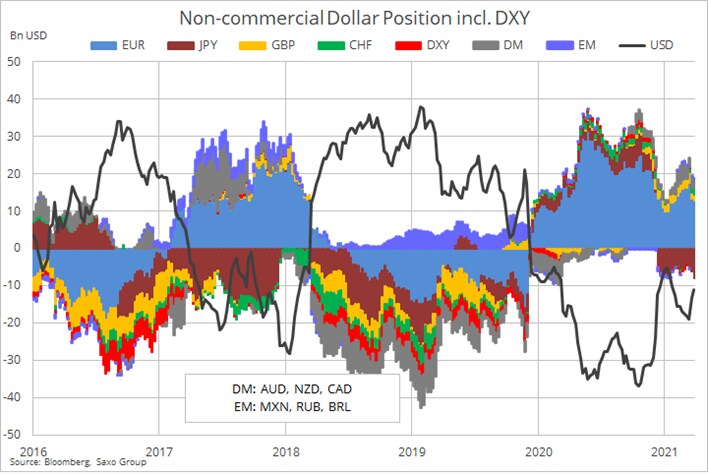